Pope Francis: Global Warming a ‘Sin,’ Man Can Atone by Recycling and ‘Car-Pooling’ 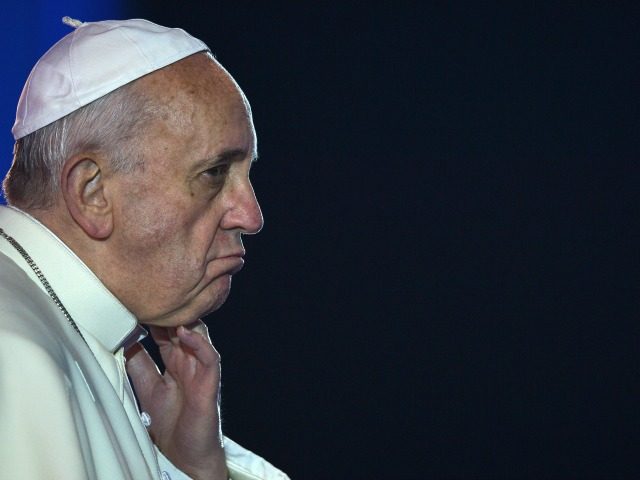 Pope Francis: Global Warming a ‘Sin,’ Man Can Atone by Recycling and ‘Car-Pooling’

In his message for the “World Day of Prayer for the Care of Creation” Thursday, Pope Francis said that human-induced global warming, as well as a loss of biodiversity are “sins” against God, which must be atoned for by planting trees, avoiding the use of plastic and paper and “separating refuse.”

“Global warming continues, due in part to human activity,” Francis said, adding that “2015 was the warmest year on record, and 2016 will likely be warmer still.”

“This is leading to ever more severe droughts, floods, fires and extreme weather events. Climate change is also contributing to the heart-rending refugee crisis. The world’s poor, though least responsible for climate change, are most vulnerable and already suffering its impact,” he wrote.

Repeatedly citing the Ecumenical Patriarch Bartholomew, who has “courageously and prophetically continued to point out our sins against creation,” Francis made his own a new list of such environmental sins, which include pollution, global warming and deforestation.

For human beings to “destroy the biological diversity of God’s creation,” to “degrade the integrity of the earth by causing changes in its climate,” to “contaminate the earth’s waters, its land, its air, and its life–these are sins,” he wrote.

Lamenting “the devastation of the environment,” Francis said that “God gave us a bountiful garden, but we have turned it into a polluted wasteland of debris, desolation and filth.”

Specifically regarding a loss of biodiversity, the Pope suggested that now there are fewer species to give glory to God.

“We must not be indifferent or resigned to the loss of biodiversity and the destruction of ecosystems, often caused by our irresponsible and selfish behavior,” Francis said. “Because of us, thousands of species will no longer give glory to God by their very existence, nor convey their message to us. We have no such right.”

The Pope said that the World Day of Prayer for the Care of Creation was instituted in order to give believers an opportunity to “reaffirm their personal vocation to be stewards of creation.” It also furnishes an occasion to thank God for the gift of creation, to implore his help for its protection and to beg “his pardon for the sins committed against the world in which we live.”

During this Jubilee Year, “let us learn to implore God’s mercy for those sins against creation that we have not hitherto acknowledged and confessed,” Francis said, while proposing that Christians need to undergo an “ecological conversion.”

Now is the time to “acknowledge our sins against creation,” the Pope said. “Inasmuch as we all generate small ecological damage,” we are called to acknowledge “our contribution, smaller or greater, to the disfigurement and destruction of creation.”

“Let us repent of the harm we are doing to our common home,” he added.

If our ecological conversion is real, Francis said, it will lead to concrete ways of thinking and acting that are more respectful of creation.

Among these are “avoiding the use of plastic and paper, reducing water consumption, separating refuse, cooking only what can reasonably be consumed, showing care for other living beings, using public transport or car-pooling, planting trees, turning off unnecessary lights, or any number of other practices.”

In his message, the Pope also applauded “a growing global political consensus” regarding the environment, praising the adoption of “Sustainable Development Goals” as well as last December’s Paris Agreement on climate change, “which set the demanding yet fundamental goal of halting the rise of the global temperature.”

Apparently the pontiff’s prayers have already been heard, since scientists are nowforecasting that 2017 will be a cooler year than 2016.