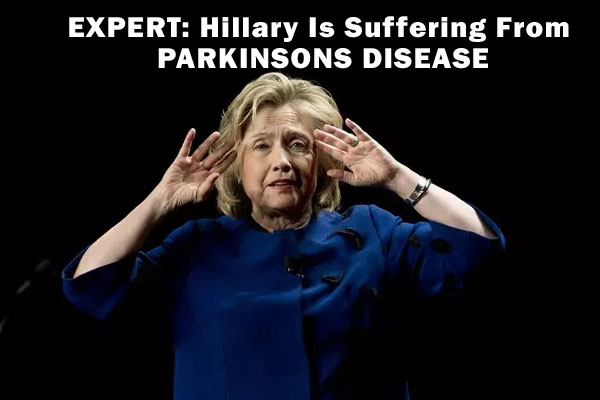 VIDEO: Slow-Motion Video of Hillary’s Collapse at 9/11 Memorial—Falls at Curbside, Loses Shoe, Arm Bent Back Behind Her Hillary Clinton Feels ‘Overheated’ at 9/11 Memorial in N.Y. She is shown being ushered into her ambulance van.

Parkinson’s Disease Does Not Discriminate By Event;
It Can Manifest At Any Time

This genie is now out of the bottle and can never be put back in.  Not by the MSM organs of propaganda, not by the serial prevarication of the DNC, not by the hopelessly lawless Obama Administration.  Hillary Clinton has Parkinson’s disease (PD) and the whole world will soon know it.

With each passing day Ms. Clinton manifests more symptoms of PD which conclusively illustrates an advanced case of Parkinson’s disease that is being carefully controlled with a powerful regimen of pharmaceutical medications.  In the words of one medical doctor, the regimen of prescription drugs is now so strong that she needs ample time and space to recover from those special meds that are supposed to keep her standing and without incident.

Such is the Kafkaesque atmosphere now surrounding the presidential campaign of Hillary Rodham Clinton.  Were anyone from the press corp to even mention her obvious physical deficits or psychological lapses, which are emerging more frequently by the week, they become the victim of a veritable sh*t-storm flung at them by the NWO globalists who completely control the MSM (mainstream media).  Yes, it’s that bad, and worse than anyone has ever seen it.

A Momentous Day Because She Was the U.S. Senator from New York on 9/11

There is much poetic justice being reflected by today’s incident at a ceremony at the Sept. 11 Memorial in New York City.  Former Senator Clinton of New York occupied that elective office on September 11th, 2001.  In that capacity she knows exactly what went down in lower Manhattan.  And all she has ever done is promote the official narrative that is falsely delineated by the 9/11 Commission Report.  Not once has Hillary indicated the least bit of interest in ferreting out the truth.  How many families has she let down in the process?

Hence, her being “overheated” today may be directly related to the truth behind the 9/11 terror attacks which she knows is far different from the “Report”.  Who wouldn’t “overheat”, especially when they have PD, knowing that the entire City of New York has been terribly deceived?  The families of the nearly 3000 victims have been profoundly betrayed and it was those in high office who permitted it.  Not a single inquiry was ever called in the State of New York, an official act which might have, at the very least, demonstrated some modicum of good faith.

Hillary R. Clinton: A Modern-day El Cid in the Making

The real story behind the ‘overheating’ of Ms. Clinton today is much more sinister that 9/11 truth, however.  The back story looks something like this.  The real powers that be, which totally control the lowly DNC, have basically ordered that Clinton be kept alive until election day.  That is the now obvious goal during this campaign season—to get her across the finish line of November 8, 2016 alive and breathing without special equipment.

Hillary Exhibiting the Behavior of an Advanced Parkinson’s Patient

This NWO cabal cares not whether she is well or unwell, bed-ridden or hospitalized, as long as she is still living.  They have, for a number of highly secret reasons, determined that she will be the Democratic candidate no matter what may come.  Toward that end they are literally performing a modern-day replay of the El Cid classic in real time … and in broad daylight.

The folks who have marching orders to keep Ms. Clinton alive and kicking are doing so without any regard for her well-being.  They don’t care how many hardcore drugs that she must take, as long as it gets her to show up and do so on time.  However, she is forever leaving the premises once she gets to the events.  And her medical handlers never know what else might transpire once she gets there.  Truly, these health professionals have the toughest job on Earth trying to present an advanced Parkinson’s patient as perfectly okay when everything is really out of control.

Of course, in the case of the Spanish general and heroic leader El Cid, his people could not keep him alive before the last great battle that would determine the outcome of the epic war. Likewise, there are now several healthcare providers who are wondering the same about Ms. Clinton.  Some of these neurologists are really concerned for her welfare, since it is now apparent that her attending physicians have dangerously ignored their Hippocratic Oath. These various qualified doctors have expressed their strong misgivings about Ms. Clinton’s ever-worsening plight.

Many political commentators are even wondering whether the Clinton camp would actually try to pull off an El Cid scenario were something tragic to happen to the candidate. That’s how cynical in their constant maneuvering the Democrats have become.  They simply cannot be trusted to tell the truth about anything, anytime, anywhere, particularly regarding the true health status of Ms. Clinton.

Candidate Hillary Rodham Clinton will soon be forced to withdraw from the race.  She can no longer discharge the most basic duties of a presidential candidate, much less those of the POTUS. Because of the serious advancement of Parkinson’s disease, which can and does occur when the individual is operating under much living stress and/or great job pressures, Ms. Clinton’s days are certainly numbered on the campaign trail. This is exactly the reason why she failed to hold a press conference for almost 280 days … while she is running for the highest office in the land, mind you.

For the disbelievers, what follows is a list of articles which contain overwhelming evidence and compelling testimony about Hillary’s PD.  The medical sources of this accurate information are both unimpeachable and certain in their presentations.

SOTN sincerely hopes that Ms. Clinton does the right thing and withdraws from this race FOR HER OWN GOOD.  We only wish her the highest good and hope that her masters respect her dire need to exit the election process before it’s too late.  Our prayers are with her during this extremely difficult ordeal.  May she be allowed to live her final days with dignity and respect.

Hillary Clinton’s Illness Is Taking Over: Says half of Trump’s supporters are in a “basket of deplorables”