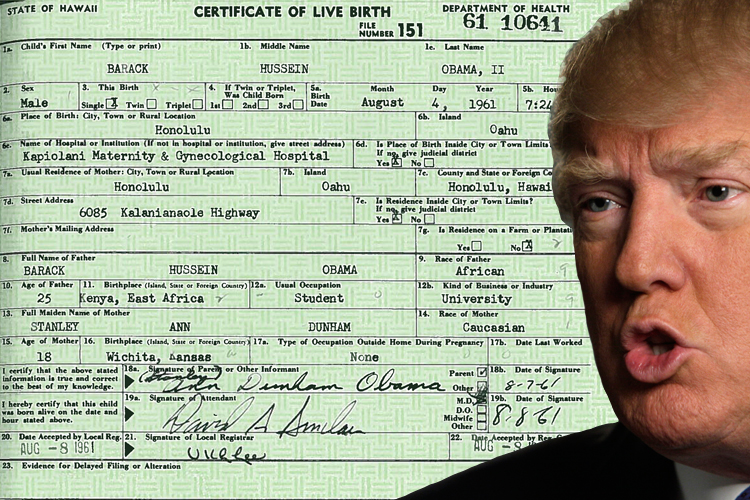 Why Did Donald Trump Suddenly Reverse His Position On Obama’s Birth? Why did Donald Trump mysteriously change his position on Obama’s foreign birth place? Did he also change his mind on the birth certificate?

SOTN Editor’s Note:
Something quite catastrophic just happened to the Trump Campaign.

Donald Trump reversed his position on Obama’s birthplace in one swift statement, which was quickly followed by his assertion that Hillary Clinton was the original birther. Only by watching the following video can the profundity of this monumental turnaround be fully grasped.

Quite curiously, what was not addressed was the authenticity of Obama’s forged and fake copy of his fraudulent birth certificate that is posted at the official Whitehouse.gov website.  Surely Trump knows that the BC has been scientifically and conclusively proven to be a bogus document.  And that officially posting it constitutes a number of serious felonies.

Did The Donald just make a deal with the devil to get elected in order to occupy the Oval Office with the blessing of the NWO cabal that was recently forced to abandon Hillary’s candidacy?

This is an extremely BIG deal since it was the Birther Movement that formed Trump’s original political base.

Trump Puts An End To The “Most Shameful, Offensive Fear-Mongering” Started By… Hillary

In the media highlight event of the day, moments ago Donald Trump said that President Barack Obama was born in the U.S., and by doing so he “finished a birther controversy” which he said was started by Hillary in 2008.

“Hillary Clinton and her campaign of 2008 started the birther controversy. I finished it, I finished it. You know what I mean. President Barack Obama was born in the United States, period. Now we all want to get back to making America strong and great again,” Trump said.

Just one day after Trump refused to say to the Washington Post that President Barack Obama was born in the United States, Trump held an event at his new hotel in Washington, D.C. where he made the above mentioned statement.

At this point, point NBC and CNBC were very offended that Trump claimed Obama’s birtherism was started by Hillary. As NBC said, “Trump was wrong, however. Hillary Clinton did not start the birther argument. She never said it”, CNBC added that “Trump repeats false claim about Clinton 08 campaign.”

Luckily there is this thing called the internet which allows us to fact check and find precisely what was done and said, even in those long ago days of 2008. And here is the answer, from a February 25, 2008 article written in the Guardian: “Clinton aides claim Obama photo wasn’t intended as a smear”

Barack Obama’s campaign team today accused Hillary Clinton’s beleaguered staff of mounting a desperate dirty tricks operation by circulating a picture of him in African dress, feeding into false claims on US websites that he is a Muslim.

Obama’s campaign manager, David Plouffe, described it as “the most shameful, offensive fear-mongering we’ve seen from either party in this election“. Obama has had to spend much of the campaign stressing he is a Christian not a Muslim and did not study at a madrassa.

Strange: it looks like neither NBC nor CNBC could track this down. It gets better:

The picture showing Obama in a turban during a visit to Kenya in 2006 first appeared on the Drudge Report website today.

The site said it was circulated by Clinton’s staffers and quoted one saying: “Wouldn’t we be seeing this on the cover of every magazine if it were [Clinton]?”

Plouffe described circulation of the picture as part of “a disturbing pattern“. “It’s exactly the kind of divisive politics that turns away Americans of all parties,” he said.

Plouffe’s comments suggest that the cordial relationship that existed between Obama and Clinton in last Thursday’s televised debate in Texas was unlikely to carry into tomorrow night’s debate in Cleveland, Ohio.

Maggie Williams, campaign manager for Clinton, played down the significance of the picture. “If Barack Obama’s campaign wants to suggest that a photo of him wearing traditional Somali clothing is divisive, they should be ashamed. Hillary Clinton has worn the traditional clothing of countries she has visited and had those photos published widely.”

And then there’s this: