A leaked report suggests British military leaders are deeply concerned about Russia’s military capabilities, but questions have arisen over the nature of the leaks, as the UK has a history of dumping information into the public sphere for strategic effect.

The findings seen by the Times outline concern that the British military has been outstripped by Russia in terms of equipment, cyber warfare, and conventional fighting capacity.

Sections of the document, entitled “Insights to ‘Training Smarter’ Against a Hybrid Adversary,” have been seen by The Times newspaper.

The document is said to have been written in March under the direction of General Sir Nick Carter, the professional head of the British Army. It is understood to have been based on lessons gleaned from a single exercise carried out in Ukraine.

It looks at Russian combat tactics, cyber warfare methods, and appears to suggest that Russia is using the Ukrainian theater as a practice run for a war with the West.

The latest report is classed as ‘sensitive‘, the lowest level of the military’s spectrum of sensitivity – the same level as personal data, for example.

However, the timing of the revelations is of interest, however, given the frequent leakiness of the Ministry of Defence (MoD) and other UK government departments.

A 2014 report indicated there had been more than 4,000 security breaches at the MoD in the previous four years, including five “security information incidents” every day in 2013.

While these were attributed to absent mindedness by senior officers, UK government departments have long been accused of leaking strategically for a range of reasons – not least to garner funding or simply dominate a narrative.

One recent example of this is a leak of classified information to the press that was apparently intended to discredit former NSA contractor Edward Snowden.

A 2013 report in the Independent newspaper claimed the outlet had seen a Snowden leak which showed that the UK ran a large data-surveillance center in the Middle East.

Snowden himself quickly denied any involvement in that revelation, noting that the style of reportage was not consistent with that of the journalists he worked with.

He said he required that his leaks be reported in a way which was “judicious and careful in ensuring that the only things disclosed are what the public should know but that does not place any person in danger.”

“I have never spoken with, worked with, or provided any journalistic materials to the Independent,” he said at the time.

“It appears that the UK government is now seeking to create an appearance that the Guardian and Washington Post’s disclosures are harmful, and they are doing so by intentionally leaking harmful information to the Independent and attributing it to others,” the former contractor said.

This report comes after Britain pledged to spend £3.5 billion on two new “strike” brigades, which are to be equipped with the Ajax (formerly Scout) armored vehicle and deployed to Europe.

When announcing the contract for the vehicles, then-PM David Cameron assured the public their manufacture would send “a message to everybody that Britain is deadly serious about having a world class military capability.”

Behind the scenes, it appears that the military does not agree with that 2014 assessment. It is instead calling for Main Battle tank (MBT) support for the brigades in the face of Russian artillery and mortars, which generals deem to be of good quality and accuracy.

The study also cites the decision of the Ukrainian infantry to ride on the outside of vehicles rather than inside them because experience had taught them that this increased their survivability in the event they came under effective fire.

The report also points to the increased use of special forces for types of warfare not considered conventional. In particular, the use of clandestine units ahead of a more conventional military invasion was mentioned.

The document suggests the tactic may include the use of such “little green men” to carry out kidnappings, sabotage, and political assassinations, as well as to intimate local security forces.

Interestingly, a similar debate on the use of unconventional, off-the-books operations is currently underway in the UK, with a number of senior figures – both Tory and Labour – calling for increased transparency for special forces operations.

Both sides have complained that UK deployments, although subject to a policy of official denial unusual among Britain’s allies, have been regularly coming to light through media reports.

Tuesday saw precisely such an event when photographs of SAS operations inside Syria came to light in the press. Besides issues of accountability and democracy, the pictures may also raise questions about the UK violating Syrian sovereignty.

Another new strand of warfare the report cites is the use of two drones at once, with one unmanned aerial vehicle (UAV) operating at a lower altitude to soak up fire, while another flying much higher engages targets.

‘Scrambling to catch up’

Military leaders appear to be deeply concerned that, while it is the British who have been fighting counterinsurgency wars in Iraq and Afghanistan and air wars in Syria and Libya, the Russians have made advances in cyber warfare – an area in which the UK is “scrambling to catch up.”

Some of these advances have come through operations in Crimea, the report says, arguing that the theatre has been used to develop “new methods of warfare as well as testing modern and prohibited weapons.”

The new methods that Russia has allegedly deployed include the use of mass text messages, “spoofing” satellite positioning systems to make opponents lose their way, and using devices to intercept enemy soldier’s communications.

The latter has apparently led to a policy whereby UK soldiers are told to leave their phones and iPads at home when on training exercises.

Despite their concerns over the march of cyber warfare technology, the UK has also invested heavily in its ownpropaganda force by reforming the historic 77th “Chindit” Brigade as a strictly online operations unit.

Prominent among those commentating on the leaked report is a former senior UK general attached to NATO. 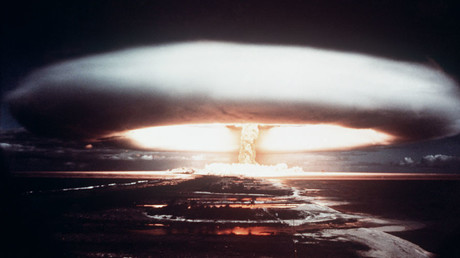 Author of a recent apocalyptic book on the risk of a hot war with Russia, new-age cold warrior Richard Shirreff wrote in The Times: “Russia is no longer a decaying post-Cold War power with obsolete or vanishing capabilities.”

“On the contrary, it has built up and is enhancing its capability with its most ambitious modernisation program in recent history.”

Listing the increases in Russia’s capability, he stopped short of calling for a full return to Cold War troop levels in Europe.

“To deter Russia effectively means thinking through the implications of hybrid and asymmetric warfare for NATO’s collective defence doctrine and how to counter it through the application of soft and hard power,” he said.

He said it was “worth remembering that the combined military strength and resources of NATO, including especially the US, regardless of the UK’s contribution really does dwarf that of Russia.”

He added that “any message that is in the UK’s or other NATO country’s newspapers in respect of the threat that is being posed by Russia, as seems to be the subtext of this report, needs to be kept in balance and kept in perspective.”