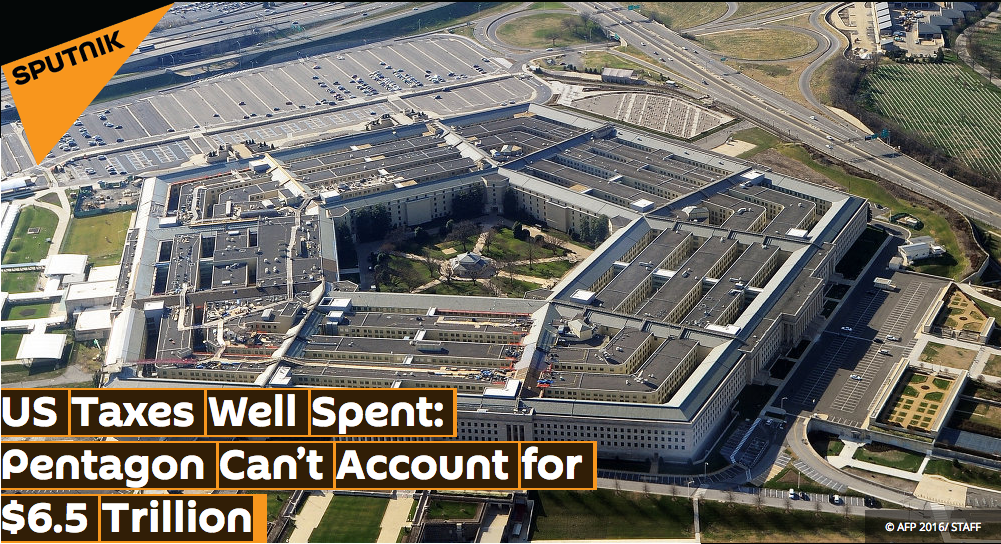 While US lawmakers are applying pressure on the Pentagon to be more transparent about how it spends money, a new report shows that the Defense Department’s substandard bookkeeping practices make that virtually impossible.

Despite a 1996 law requiring all federal agencies to conduct regular spending audits, the Pentagon has so far failed to conduct a single one. While US lawmakers have pressed the DoD to comply by September of 2017, a new inspector general’s report indicates that meeting this deadline is highly unlikely. In common language, the Pentagon has no idea how it spent nearly $7 trillion.

This is largely due to the fact that the DoD fails to provide the “journal vouchers” for its transactions, intended to provide serial numbers and dates, for bookkeeping purposes.

But the report also found that many of the Pentagon’s records were missing without explanation.

_
“DFAS Indianapolis did not document or support why the Defense Departmental Reporting System-Budgetary, a budgetary reporting system, removed at least 16,513 of 1.3 million records during third quarter FY 2015,” the report reads.

While nothing suggests foul play, a lack of proper accounting makes it impossible to determine how much money the Pentagon spends, and on what.

“While there is nothing in the IG’s report specifying that the money has been stolen, the mere fact that the Pentagon can’t account for how it spent the money reveals a potentially far greater problem than simple theft alone,” Jay Syrmopoulos writes for the Free Thought Project.

The report warns that the issuance of journal vouchers must be enforced immediately. _
“Until the Army and DFAS Indianapolis correct these control deficiencies, there is considerable risk that AGF financial statements will be materially misstated and the Army will not achieve audit readiness by the congressionally mandated deadline of September 30, 2017,” it says.

These problems are nothing new, however. A Reuters investigation from 2013 determined that “for two decades, the US military has been unable to submit to an audit, flouting federal law and concealing waste and fraud totaling billions of dollars.”

Getting the DoD to turn around its lax accounting in one year seems as unlikely as getting the United States government to spend less on its military, and more on education and healthcare.