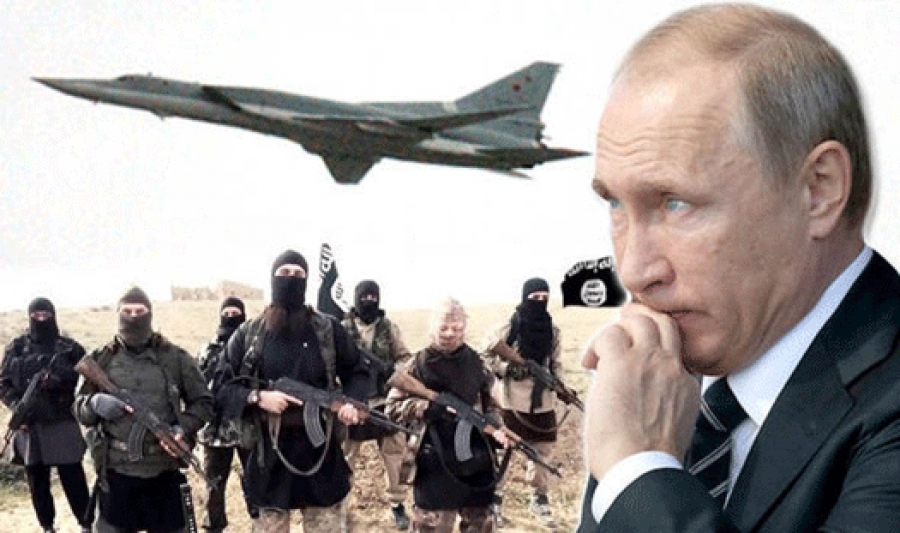 TMR Editor’s Note:
The following short blog presents a theory that The Millennium Report has been writing about since the very first Russian warplane showed up in the Syrian theater of war.

That one of the primary goals of the Syrian War was to draw Russia into the Middle East conflict. The terrorism against Christians would surely trigger a military response by Putin.  And so it did.

The Neocon cabal hoped that it would tie up much of the Russian Air Force and other personnel operating in the Northern Levant.  Not only would they be out of Russia proper, they would also be targets for the weaponry that the Western powers have given to ISIL.

However, the real dividends from the severe Russian intervention would come in the form of Islamic Jihad being exported to Russia and especially to the nation states and republics on the periphery of the Motherland.  This movement of the DAESH terrorists and ISIS fighters toward Russia is the real reason for such a dirty war against the innocent people of Syria and Iraq.

The sentiments against Russia are now so strong and hardened that all that is needed is a train ticket to the Caucasus for every terrorists that wants to get even with Russia. As far as the Neocons are concerned it is mission accomplished.

As for Putin’s Russia, they have made the world community of nations aware of the fact that ISIS was created by the USA, UK, Israel, Saudi Arabia, Turkey and other co-conspirators.  Will there be a price to pay?  There is always a cost associated with telling the truth about the tyrannical hegemons who feel they are invincible.
The Millennium Report

It’s not the first time that the Daesh jihadists threaten Russia and Putin, but this time things may be more serious. That’s because of Russia’s effectiveness against them in Syria, a decisive factor that determined the balance of the war in Syria and Iraq in favor of the armed forces of these two countries.

A newly-released video attributed to Islamic State (IS, formerly ISIS/ISIL) urges jihadists to stage attacks in Russia. The threat comes amid Russia’s repeated warnings that IS terrorism in Syria and Iraq could soon spread to other parts of the world.

While its authenticity could not be confirmed, Reuters reported that the video is thought to have come from the terrorist group’s Telegram account.

A 9-minute subtitled video shows armed militants launching attacks on vehicles and tents, as well as replenishing arms supplies somewhere in the desert. The footage ends with one of the masked militants encouraging the group’s supporters to mount attacks on Russian soil, while personally threatening President Vladimir Putin.

As the Daesh terrorists were started to losing ground in Middle East, we saw an escalation of terrorist attacks in European soil. Yet, these didn’t seem to be centrally organized. As pointed in previous article: “… in the chapter of terrorism, we have now two new situations: first, the attacks are not necessarily organized centrally, second, they are not necessarily occur in the biggest urban areas, which practically means that they can occur anywhere.”

However, Russia’s determination to clean up the mess in the Middle East may lead to more organized terrorist actions by the jihadists inside Russian soil as an act of counterattack.

This may be an indirect goal of the Western hawks against Russia. It has also been mentioned that “another reason for which the West wanted Russia to get involved in the Syrian mess, is to ‘absorb’ the Jihadist fanatism in its soil. If the suicide bombings start to ‘shift’ from Western targets to Russian territories, Putin will have to face another big problem, apart from any other potential ‘color revolutions’, a dead end in Syria, or, renewed Western sanctions and further economic trouble.”

Therefore, it seems that the plans of the Western hyenas are going well so far, with a very convenient timing. As the US establishment promotes the most suitable person, Hillary Clinton, to reheat the new Cold War, Russia may succeed in cleaning the Middle East from terrorists by the start of the next US presidency.

Then, Hillary will have all the time to follow the neocon strategy, bringing further trouble to Putin, while he will have to deal with another big problem of terrorist attacks inside Russian soil. As in many cases in the past, the “handbook” of this strategy includes an increased domestic disapprove of Putin that could come from the increased sense of instability and insecurity among the Russian citizens, as a result of the escalation of terrorist operations.