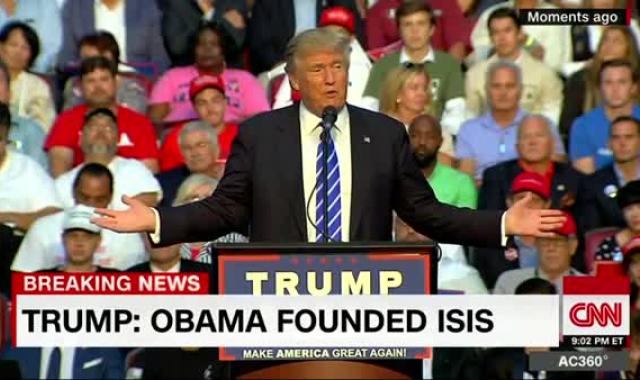 SUNRISE, Fla. — A day after remarks that appeared to suggest that gun rights advocates harm Hillary Clinton, Donald J. Trump sprayed his fire at President Obama on Wednesday, accusing him of creating the Islamic State and saying the terrorist group “honors” him.

Mr. Trump’s statement was an escalation in his recent criticism of the Obama administration’s handling of the terror threat, as he had previously accused only Mrs. Clinton of having a “founding” role in the terror group. His suggestion that the president was honored by ISIS recalled an earlier controversy when Mr. Trump seemingly implied that the president had some connection to the terrorist massacre of 49 people at the Pulse nightclub in Orlando.

“He doesn’t get it, or he gets it better than anybody understands,” Mr. Trump told Fox News in June. And the use of the president’s middle name recalled Mr. Trump’s questioning of Mr. Obama’s faith during his crusade several years ago to prove that Mr. Obama, who is Christian, was not born in the United States.

Mr. Trump also found himself in an awkward camera framing immediately after criticizing the Clinton campaign for the appearance of Seddique Mir Mateen, the father of the Pulse gunman, at Mrs. Clinton’s campaign event this week. “Wasn’t it terrible when the father of the animal that killed these wonderful people in Orlando was sitting with a big smile on his face right behind Hillary Clinton?” Mr. Trump said.

Yet sitting behind Mr. Trump was Mark Foley, a former Republican congressman who resigned after being confronted with sexually explicit messages he had sent to underage congressional pages. Mr. Trump seemed not to be aware of the disgraced former congressman’s presence as he tried to cast doubt on the Clinton campaign’s account that it had not known who Mr. Mateen was. “When you get those seats, you sort of know the campaign,” Mr. Trump said.

The boisterous rally here was a marked change from his rally earlier on Wednesday in Virginia, where a relatively subdued Mr. Trump promised he would be the best candidate to save the coal industry. He also said his remarks on Tuesday, in which he seemed to suggest that “Second Amendment people” could take matters into their own hands if Mrs. Clinton were elected, had been misconstrued. “They can take a little story that isn’t a story and make it into a big deal,” he said.