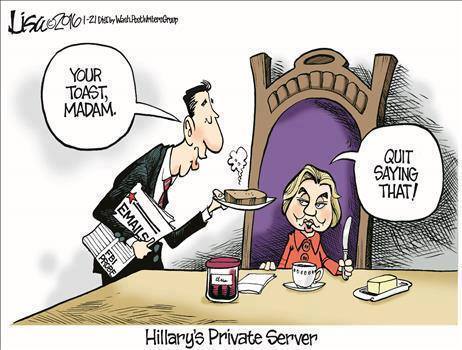 There has never been a time in US history where our leadership has failed us this badly. Over the last either years, Obama, with the help of Hillary Clinton, has done everything in his power to destroy what makes this country great.

Obama wants our military depleted, he wants the world not to be afraid of us, he wants millions of immigrants to come and go as they please, and he is perfectly content with allowing ISIS to grow into the global threat that they are today.

There’s absolutely no denying that WikiLeaks has been a world champion of bringing justice to those that are corrupt and abuse their political powers, like Hillary Clinton.

In a BRAND NEW leak late last night, Julian Assange (Editor-In-Chief for WikiLeaks) not only guaranteed that he had enough evidence on Hillary Clinton to put her in jail, he released a PDF file that we have our hands on.

The file from Congress reveals that there are strong ties between Hillary Clinton and high members of the Islamic cleric in Turkey.

Remember about a month ago when you saw thousands of people in Turkey try to pull off a coup against their leader Erdoğan? WikiLeaks has proven Hillary Clinton was one of the chief architects behind that.

Sources speaking anonymously have indicated that the connection between Clinton and acolytes of the imam, Fethullah Gulen, will end the relationship between the U.S. and Turkey, a key NATO ally, if Hillary Clinton wins the White House.

Turkey’s president, Recep Tayyip Erdoğan, has initiated an extreme retaliation against Gulen and his followers, as well. Erdoğan, who was once allied with Gulen, has asked President Obama several times to pull strings to have Gulen extradited to his other home in Pennsylvania.

The WikiLeaks documents indicate that Erdoğan  blamed Gulen for the uprising against the Turkish government. The documents show that on April 1, 2009, an email from a Gulen follower named Gokhan Ozkok asked a Clinton deputy chief of staff, Huma Abedin, for help in connecting one of his allies to President Obama.

The documents show that Ozkok is a founding board member of the Turkish Cultural Center and part of a large business apparatus that is closely tied in with the Gulen movement, also known as Hizmet.

Had WikiLeaks not gained control of these emails, we never would have been able to see this major connection. The documents show us that Ozkok served as the national finance co-chair of the pro-Clinton Ready PAC. He is on record contributing $10,000 to the committee in 2014 and $2,700 to Clinton’s campaign in 2015.

In these documents, we also found out that there is a connection between Gulenists and Hillary Clinton in that a Gulen-aligned group called the Alliance for Shared Values hired the Clinton-connected Podesta Group to lobby Congress on its behalf.

The Podesta Group primarily exists for those wanting influence from Clinton. The firm was co-founded by John Podesta, which is Clinton’s campaign chairman. See the connections building?

Erdoğan has had trouble stopping the Gulen’s influence in the US, but it hasn’t worked because he is closely tied into a network with Hillary Clinton.

In 2011, the New York Times conducted an investigation and proved that the Gulen’s were given work-visas (by the State Department when Hillary was Secretary of State) in order to teach at Turkish schools in the US. The teachers were forced to give nearly all of their salaries back to the Gulen movement.

The idea was that the teachers could come to the US for a better life, but nearly all of their money would go to their bosses, the Gulen Movement, and then the Gulen’s would make large contributions to Hillary Clinton in exchange for her allowing them to bring thousands of workers over here from Turkey.

in 2015, the documents reveal that Gulen followers donated to Clinton’s various political campaigns and to her family charity in sums of $500,000 and $1 million. .

Ihsanoglu, a Gulen ally, not only met with Obama in Istanbul days after this email, Obama invited him back to the White House where he asked Obama to create a U.S. ambassador to the Muslim world in 2009.

CIA officials have indicated that Ihsanoglu has a very long history of working with the terrorist group Hamas, but Hillary and Obama turned their cheek to that.

The new leaks clearly show that the Podesta Group made connections with several Turkish companies even though they had known ties to terrorist organizations. The leaked documents show that Clinton took millions in donations in exchange for allowing Turkish schools to be run in the US by terrorist supporters.

Julian Assange also leaked documents PROVING the Podesta Group represented Uranium One, a Russia-controlled uranium company that was approved to buy 1/5 of our uranium by Hillary Clinton when she was Secretary of State. Documents show that Hillary received $145 million to her “Foundation” in return.

An anonymous FBI source indicated that this is a very serious situation and that Hillary could end up being prosecuted if more information is released proving she took money in exchange for political influence. The source indicates that she could be in prison before the election in November if WikiLeaks dumps more information like this.

This story cannot gain enough traction unless thousands and thousands of patriots like yourself share this message. The mainstream media has continued to block the Silent Majority Patriotsmovement, but they can’t hide this leak if we all unite as one and make this go viral.

Our time is running out to put Hillary Clinton in prison. If we do nothing and let major stories like this sit, she will become president and we will never be able to touch her again. We must have your support and help to spread this movement to defeat Clinton for good.