Six months after four minors were executed, nine others remain at risk despite pledges by Saudi to end child executions 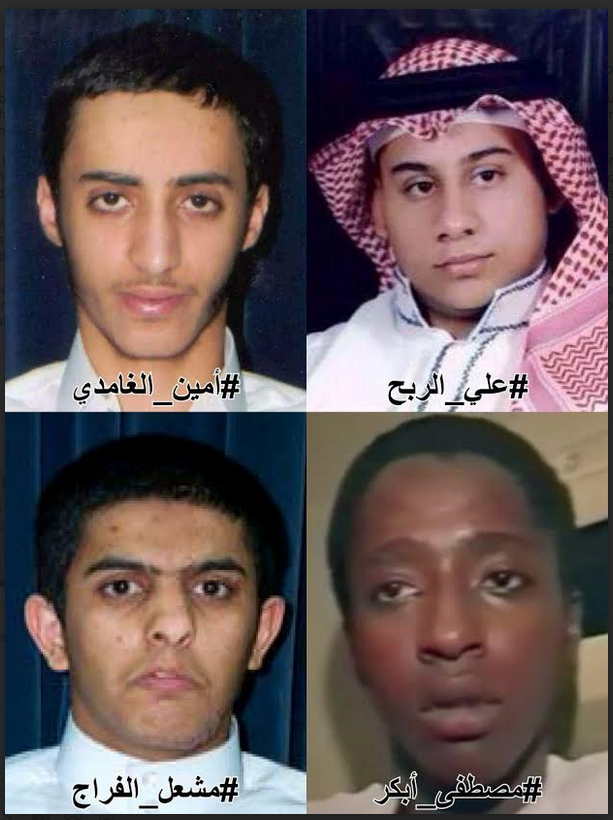 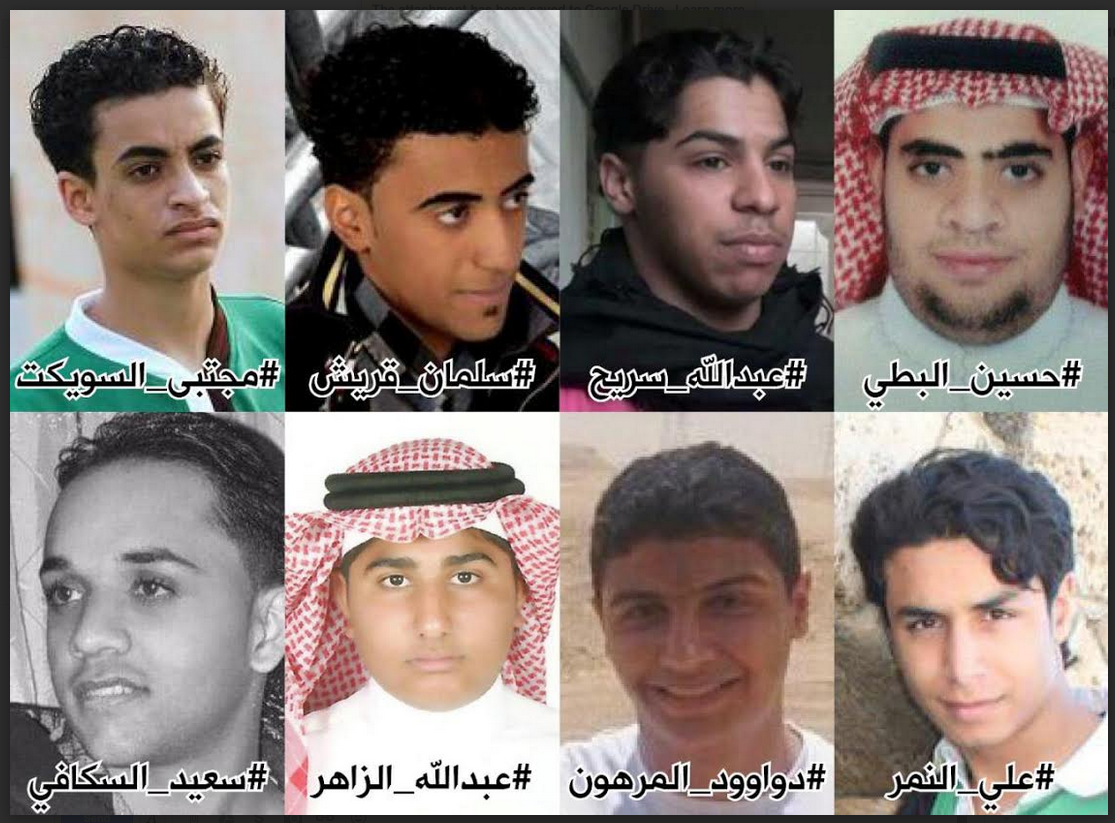 Six months after four minors were executed, nine others remain at risk despite pledges by Saudi to end child executions

Saudi Arabia said on 28 February 2014 in a report submitted to the Human Rights Council of the United Nations: (the death penalty fall for minors, and it is not carried out on the children at all, and it should be noted that the definition of a child under KSA polices agreed with Article (1) of the Convention on the Rights of the Child), but in the 2nd  of January 2016 and after twenty months from the report, Saudi Arabia executed 47 people, including four minors. To form the second-largest mass execution in its history, after the execution of 61 people in 7 January 1980.

The execution of 2 January 2016, raised denunciations succession, as expressed by UN Secretary General Ban Ki-moon‘s dismay, it was considered that the trials -at referring to the execution of Sheikh Nimr- raised serious concerns about the nature of the charges and the fairness of the trial. Also the High Commissioner for Human Rights at the United Nations Zeid Ra’ad Al-Hussein expressed his regrets of executions carried out by Saudi Arabia urging them to ban executions, and he express concern that the provisions did not meet a strict set of substantive and procedural requirements. The High Representative for Security and Foreign Policy Affairs in the European Union, Ms. Federica Mogherini, also raised the hazardous concerns regarding freedom of expression and respect for basic civil and political rights, and she confirmed that they must be protected in all cases, including in cases of anti-terrorism.

Saudi official bodies including the Interior Ministry  and the Justice Ministry, rejected the criticism and claimed that the provisions are (under formulation in defense guarantees and, are the judgment is confirmed only after exhausting all levels of litigation). The National Society for Human Rights, held that (trials met the legality and due process of law and the principles and rules of fair trial and get convicted on the guarantees).

European Saudi Organization for Human Rights, Confirms that according to some of the cases that it watched and documented, the Saudi government committed during the executions violations of a number of international conventions, where did it didn’t get the conditions of a fair trial, and the executions were based on charges extracted under torture, as committed major violations, which contained the Children Rights Agreement that Saudi Arabia joined.

Ali Saeed Al-Rebeh, was of the cases the organization could track the progress of the trial and document what happened to him from violations. He was arrested on 12 February 2012, and was then at the age of eighteen years and two months, and he accused of taking part in demonstrations in February of 2011, and other charges when he was  17 years old, and he was executed based on those charges.

A documentary film pointed that some of who were arrested by Saudi Arabia on suspicion of belonging to al-Qaeda were at young age and were not aware of the reality of things. Although the trials in Saudi Arabia are not transparent, and it is difficult to access information about each of the executed in the 2nd January 2016, but it was known there were other minors : Mishaal Hammoud al-Faraj (17 years) – Amin Mohamed al-Ghamdi (17 years) – the Chadian Mustafa Muhammad Tahir Abkar (14 years). The available information indicates that they were arrested in raids in June 2003 in Khalidiya Mecca neighborhood, and in January 2004, and there ages were below 18, and as explained at some of the interviews and documentaries, some of them dropped their militant thoughts, and  in the context of what was expounded on Saudi media, they didn’t faced specific crime that deserve penalty, as they were nearly 13 years in prison before being executed. The police chief of Mecca sais that there are children who would have thought that they was brought to attend Quranic courses.

The European Saudi Organization for Human Rights (ESOHR), called the Saudi government for a transparent and unannounced audits on 2nd January 2016 executions, and calls for an involvement of neutral points of human rights and legal verification, which led to the implementation of these executions, which included four minors.

9 minors at risk of execution:

Despite the flaws and shortcomings apparent in the course of justice, which claimed the killing of four minors in the January 2, ESOHR documented the existence of 9 minors that are threatened currently on death row, and they are distributed on different situations, among who may be killed at any moment, and those who received a ruling elementary death and awaiting appeal, they are: Ali al-Nimir, Abdullah alZaher, Dawood al-Marhoon, Hussein Ali alBata, Saeed Mohammed alSkafi , Salman Amin al-Koraysh, Mojtaba alSuwaiket, Abdullah Salman Al Surih, Hassan Abdul Wahab Al Jazer.

Some of them were arrested at an age of less than 18 years old, and some were arrested over the age of eighteen, but they faced charges related to less than 18 years of age. ESOHR documented cases of some of them in previous reports, some of whom had been tortured to extract confessions, as practiced with each deception and coercion methods, and some of the confessions recorded them had been written by interrogators handwriting and coerced into signing, and the trials lacked to the conditions of a fair trial.

ESOHR reminde the Saudi government to her statement, in 28 February, 2014: (the death penalty for minors fall, and it’s not carried out on the children at all).

As we can see in ESOHR, in the base of many facts, it is incumbent on the Saudi government to punish all who are contributed to the abuses of minors, who were killed in the 2 January 2016 and they are: Mishaal Hammoud alFaraj – Ali Saeed Al Rebeh – Amin Mohamed alGhamdi – Mustafa Mohammed Taher Abkar, from the moment of arrest until the murder.

ESOHR also calls for redress the sentences of nine minors who faced the death penalty now: Ali alNimr, Abdullah alZaher, Dawood alMarhoon, Hussein Ali alBata, Saeed Mohammed alSkafi, Salman Amin Al Koraysh, Mojtaba alSuwaiket, Abdullah Salman Al Surih, Hassan Abdul Wahab Al Jazer, and to punish the shareholders and the legal related to the abuses, and to release them and retrial in which all of the elements and conditions of a fair trial is completed.

ESOHR also found through the follow-up of cases of minors, such as the case of Ali Al Rebeh, or the cases of minors currently threatened with death, that there is a vast difference between the existing laws for minors in the paper, and between the treatment applied on the ground. We draw the attention of the Saudi government to the importance of the practical commitment to full domestic and international laws. It does not make sense to launch a theory in international forums about the systems started in Saudi Arabia permits, without the practical commitment on the ground, especially with respect to the execution of minors. The Saudi Arabia should stop using the official media in promoting incorrect accusations to minors, and launch provisions through the media before the results of the trial, as the government must open the way for the defendants or their lawyers or their families in the local media, because using media to show only the official view confirm that it is used in unfair practices.