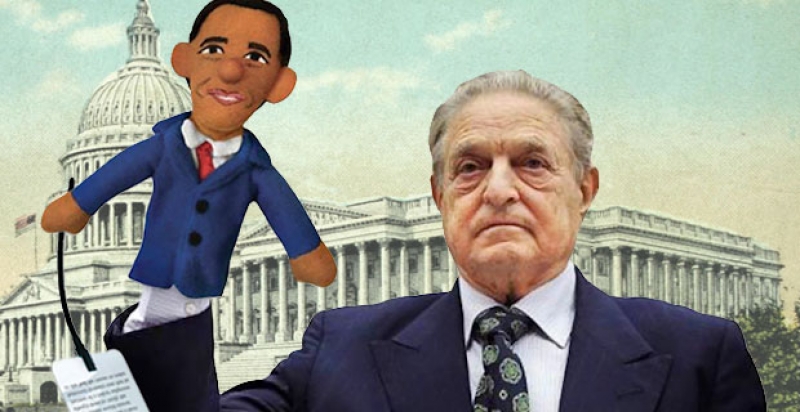 Soros-Obama Cabal: An Extremel Dangerous Crime Syndicate and Terrorist Organization That Has Proven to be a Menace to Societies Everywhere MUST READ:  SOS: The Burden Now Falls To We the People!

The United States has already seen the result of President Obama’s disastrous and transparently warmongering foreign policy around the world.  Even the Nobel Peace Prize Committee has twice expressed strong misgivings about awarding him the 2009 prize. Obama has been at continuous war longer than any other president in U.S. history with no end in sight of them ending.

As for criminal market profiteer and war-making George Soros, it was his ill-gotten gains which funded Obama’s two election victories.  There’s an old saying paraphrased as follows:  How you make your money will determine the good or evil it will do in the world. Hence, it ought to come as no surprise that the fortune stolen by Soros fortune has caused so much misery and suffering throughout the Western world.

There is now a critical time window which opens today with the start of the Republican National Convention in Cleveland and closes with the last day of the Democratic National Convention in Philadelphia. This particular time frame will no doubt be used by the Soros-Obama crime team to trigger unprecedented violence to disrupt both conventions.  Soros has a number of political NGOs which have been stealthily set up over many years.  Their only purpose is to sow seeds of chaos and discontent through the body politic.  When a critical mass of rage and anger has been reached, they will unleash a wave of violence on America unseen in presidential election history.

The key part of the Soros-Obama scheme is to invade the GOP Convention every way they can.  Soros created the fraudulent Black Lives Matter and New Black Panthers groups to do precisely this, as well as to conduct many other subversive activities.  They will not let their many seditious plans, to transform the USA into the USSA where A stands for AMERIKA, be impeded as they are on a very strict time schedule.

Every act of governmental lawlessness and political recklessness by the Obama Administration has been committed toward creating more societal chaos.  The Soros-Obama game plan revolves around an extremely perverted social engineering scheme which greatly intensifies every social ill, especially racial tensions and religious conflicts.  Likewise, the engineered economic hardship and financial distress, both individual and collective, has been quite purposefully magnified under the Obama dictatorship.  His willful negligence and subtle sabotage of the American economy is unprecedented and a critical piece of Operation Terrorize & Disrupt.

The culmination of this operation will most likely transpire during these last 2 weeks of July in an effort to throw the presidential campaign season into total disarray.  They have several goals for executing these violent plans, the most important of which is to establish martial law.  By perpetrating multiple acts of terrorism and methodically murdering law enforcement officers around the nation, the stage is being set for this declaration of martial law.  After sufficiently disrupting the electoral process, particularly through violence at the conventions, Obama will claim the necessity to declare martial law.

Martial law is only the first step in their covert scheme to ultimately cancel the presidential election outright in the interest of giving Obama a third term. Such an unconstitutional and illicit act would effectively function as a coup d’état. Both Soros and Obama know that if they do not proceed in this manner both will likely end up in prison rather than taking the presidency yet again.  The sheer desperation of the Hillary Clinton campaign reflects the very same need to win the presidency in order for her to stay out of prison as well.

The Communist/Social/Progressive side of the political counterfeit coin will do anything in their reach to grab power unlawfully or to stay in power illegitimately.  History is littered with violent coups and bloody revolutions where the true instigators stay far away from the scene of the crime, all the while manipulating the criminal elements from behind the curtain.  The MO of those who have created the Obamanation with great deliberation is no different than those genocidal murderers and criminally insane psychopaths of the last century.

Obama was chosen by Soros & Company for a number of reasons.  Soros, incidentally, is only the sociopathic face of the very broad and deep NWO cabal and conspiracy that has empowered him to run his multi-decade crime spree around the globe.  This criminal camarilla knew they had to select a president who was extremely easy to manipulate and who would think nothing of betraying the American people at every turn.  Setting up a POTUS who didn’t even possess a birth certificate was a critical part of this plan, as Obama could then be compelled to commit any high crime including treason to advance his ‘legacy’ of death and destruction.

What is critical to understand in this plot to overthrow the American Constitutional Republic is that Obama was used to normalize every perversion of government.  Year after year has brought more unlawful executive orders designed to turn the presidency into a full-blown dictatorship where the Legislative Branch has been subordinated to willing enabler.  Now Obama is ready to come out of the closet — FULL BORE — and reveal his true communist totalitarian colors.

The entire community of nations is well aware that the USA was effectively transformed into a banana republic under the Obama tyranny.  Each country that did not go with the perverted Obama flow has been dealt with harshly as the mayhem throughout the Mideast, chaos in South and Central America, and pandemonium in South Asia clearly attest to.  Truly, Obama has wrecked and ruined the international order as no other leader since Adolf Hitler.  He has been remarkably successful at normalizing political anarchy and governmental lawlessness, social degeneracy and economic depression, religious strife and racial conflict both at home and abroad. George Soros and Barack Obama have closely aligned in the same manner as Sauron and Saruman did, respectively, in the Lord of the Rings.  Soros is the behind-the-scenes brains who has literally destroyed the European Union (that’s actually a very good thing), after he devastated the Ukraine and while he desolated the Northern Levant.  As a matter of fact, this analogy to the Lord of the Rings is so apt that one might thing that J. R. R. Tolkien had foreknowledge of the travails of the 3rd Millennium.

With this critical understanding it has never been so important for the American people to disrupt the Soros-Obama plan for world domination.  The whole NWO agenda is leading to a totalitarian One World Government where 1984 meets Brave New World and Lord of the Flies. It looks like there have been several prescient authors who were able to telescope into the future with extraordinary accuracy.   However, it is the striking parallels with the Lord of the Rings which now compel the U.S. citizenry to expose this rapidly unfolding plot … while we still can.

The 2016/2017 time frame has been predicted by many over the centuries as a crucial period of global breakdown and world transformation.  That time is now upon us in living color during prime time every day of the week.  Such a real-time evolution of societal collapse requires a proactive response from those who are aware of the true status of things.

Western Civilization is now inextricably interconnected with the East; therefore, the edicts issued from Washington, D.C. can deeply affect nations large and small, rich and poor. What happens in the White House will not only have profound impacts on American life, the next POTUS will deeply affect foreign friends and foes alike. The next president will be poised at the cusp of an incomparable planetary revolution of consciousness and mundane order.  Hence, short-circuiting the nefarious plans of those who would fabricate a tyrannical New World Order based on naked despotism must become a national priority … not only in the USA but in every nation on Earth.

We can begin in earnest by circulating the following open letter.

SOS: The Burden Now Falls To We the People!

Obviously both George Soros and Barack Obama are very low-level pawns in this global geopolitical chess game that is being played out by forces way above their pay grades. However, they are the face of this multi-millenial plot for world domination. The actual NWO ruling cabal is a massive hierarchical pyramid power structure, much of which has never been revealed anywhere in the public domain—yes, its membership is that secret.

More to the point, the Council on Foreign Relations, Trilateral Commission, and Bilderberger Group, along with the Committee of 300 and Council of Rome, are even quite low on the totem pole. Only when one gets to the level of the Incunabula and Cahilla, which are both well above the Freemason Black Nobility, can the true masters of the Soros-Obama team become a little clearer. The bottom line here is that, if they can be seen and their names are known, they are but mere tools of the real decision-makers and very expendable.