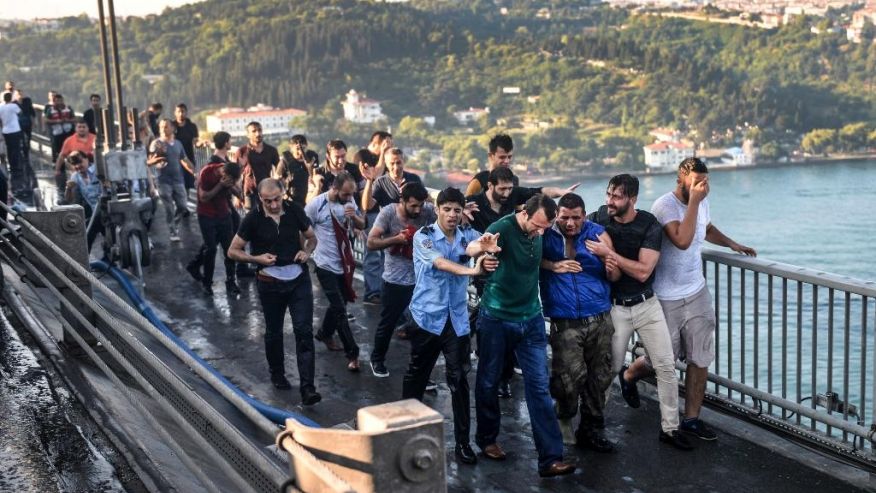 People apprehend a Turkish soldier, third right in blue, that participated in the attempted

Overnight Turkish president Erdogan’s counter-coup witch hunt continued, when thousands of police officers were suspended on Monday, widening a systemic purge of Erdogan’s enemies first in the armed forces and then judiciary after a failed military coup, now focusing on the interior police force, and raising concern among European allies that it was abandoning the rule of law. Turkey’s state-run news agency says the nation has detained or suspended 20,000 personnel across the country, following Friday’s foiled coup attempt.

Anadolu Agency says a total of 8,777 employees attached to the ministry were dismissed, including 30 governors, 52 civil service inspectors and 16 legal advisers

Thirty regional governors and more than 50 high-ranking civil servants have also been dismissed, CNN Turk said. Thousands of members of the armed forces, from foot soldiers to commanders, were rounded up on Sunday, some shown in photographs stripped to their underpants and handcuffed on the floors of police buses and a sports hall. Several thousand prosecutors and judges have also been removed.

Bloomberg summarizes as follows: more than than 7,500, including more than 6,000 soldiers from various ranks detained by police, Turkish PM Binali Yildirim says in televised remarks. Those detained include 755 judges and prosecutors, 650 civilians and 100 police officers. Separately, about 9,000 from the Interior Ministry, 3,00 judges and prosecutors and 1,500 staff members of Finance Ministry have been removed from duty.

In total, approximately 20,000 political opponents “purged” just days after the conclusion of the failed coup.

At the same time speculation that the terribly planned “coup” was anything but came from the European Commission itself. As Reuters adds, the swift rounding up of judges and others after a failed coup in Turkey indicated the government had prepared a list beforehand, according to EU commissioner dealing with Turkey’s membership bid, Johannes Hahn, said on Monday.

“It looks at least as if something has been prepared. The lists are available, which indicates it was prepared and to be used at a certain stage,” Hahn said. “I’m very concerned. It is exactly what we feared.”

It is also exactly what Erdogan has expected and hoped for. And with broad western support for Erdogan over the weekend, his mission to concentrate all Turkish power in his own hands is now assured.

Meanwhile, Erdogan on Sunday told crowds of supporters, called to the streets by the government and by mosques across the country, that parliament must consider their demands to apply the death penalty for the plotters. “We cannot ignore this demand,” he told a chanting crowd outside his house in Istanbul late on Sunday. “In democracies, whatever the people say has to happen.”

Once again, Europe pushed back however, when Volker Kauder, parliamentary leader of German Chancellor Angela Merkel’s party bloc, said Turkey must obey the rule of law. “If the death penalty were to be decided, the negotiations would certainly be at an end,” Kauder says in ZDF television interview, referring to talks with the EU. “We mustn’t let it go unchallenged if the rule of law isn’t obeyed.”

Austrian Foreign Minister Sebastian Kurz also said it would be unacceptable for Turkey to reintroduce the death penalty, which it abolished in 2004. Abolishing capital punishment was a prerequisite for talks with Turkey on membership of the European Union, to which it still aspires.

But… this is Turkey: the law is whatever Erdogan says it is.

Others also realized what they have done, but it was too late. EU foreign policy chief Federica Mogherini warned the Turkish government on Monday against taking steps that would damage the constitutional order. “We were the first… during that tragic night to say that the legitimate institutions needed to be protected,” she told reporters on arrival at an EU foreign ministers meeting, which was also to be attended by U.S. Secretary of State John Kerry.

“We are the ones saying today rule of law has to be protected in the country,” she said in Brussels. “There is no excuse for any steps that take the country away from that.”

Actually the excuse came and went over the weekend, when – with Europe’s blessing – Erdogan not only repelled the fake coup, but also got a green light to crackdown on anyone who is even remotely critical of him.

And, oh yes, Erdogan still holds all the leverage: some two million Syrian refugees he can unleash on Europe at any moment he wishes.