TROUBLE: U.S. Sets “DEFCON 3” — US to move forward with plans to attack Syrian President Assad and his forces; Russia Says it will “engage and destroy” anyone who tries! 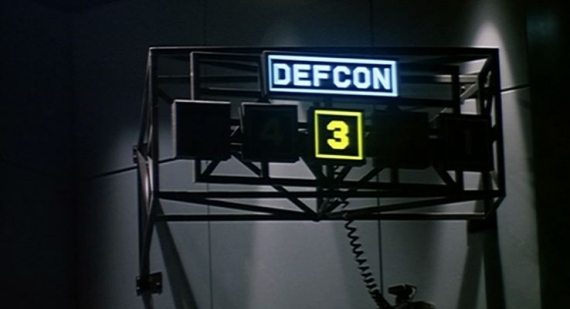 TMR Editor’s Note:
It has been brought to our attention by trusted colleagues that the following article contains information that is not accurate.

TMR has, nevertheless, kept the post public so that others in the know may read it and provide us with evidence either in support or in contradiction to it.  It is a very alarming piece which represents movement must be watched closely, if and when it does occur.

TMR has often seen cases where sensitive data like this has been leaked on the Internet in order to give folks a heads up.  An alert populace is the very best defense that the American people have against their thoroughly rogue U.S. Federal Government.

At 9:43 PM Eastern US last night (Sunday, June 19) the Armed Forces of the United States were reportedly ordered to set condition “DEFCON 3.”   This is an extraordinary development and signals serious trouble, LIKELY requiring an expedited military response.

The defense readiness condition (DEFCON) is an alert state used by the United States Armed Forces.

The DEFCON system was developed by the Joint Chiefs of Staff (JCS) and unified and specified combatant commands. It prescribes five graduated levels of readiness (or states of alert) for the U.S. military. It increases in severity from DEFCON 5 (least severe) to DEFCON 1 (most severe) to match varying military situations.  The chart below explains the system – click the image (twice) to enlarge.

For the US to have implemented DefCon 3 at 9:43 PM EDT on a Sunday night, means something very big is taking place.

At 10:14 PM EDT on June 19  “Unusual strategic activity” was observed in Russia.

At 10: 25 PM EDT on June 19, “We do not know what Russia is reacting to; nothing observable in any operations theater.”

At 11:01 PM EDT on June 19 “Unusual United States strategic activity now being observed. Source reports to SuperStation95 “I have no context for any of this. I do not know why this is taking place.”

At 12:38 AM EDT this morning, June 20,  “Multiple, solidly reliable confirmations of DEFCON-3”

At 1:35 AM EDT this morning, June 20,  “RC135V has just left from Mildenhall (UK) to do a flyover of large armored and infantry movements ACROSS ALL OF RUSSIA! We are getting word of movement from ALL 4 MILTARY DISTRICTS! Also seeing a pattern of almost all Russian military Satellites changing position

At 1:50 AM EDT – OSINT and other sources indicate that the US military has gone into full nuclear readiness mode.

Military channels are transmitting unusual encrypted messages at 11175 Khz.
Sources indicate that multiple armed US bombers are in the air. Some bases no longer have any grounded aircraft.
Fighters are also in the air.
Local civilians are making report of increased activity at US military bases across the country.
US response appears to be a reflection of Russian activities, based on available information.
Buzzer at 4625 KHz is no longer active.

At 2:05 AM EDT June 20, “It’s official, there is some type of Crisis.  Numerous, extremely high level officials arriving at Pentagon.”

At 2:23 AM EDT June 20, B52 activity overheard via LiveATC.com ATC feed. Nothing further other than they are active from ANDERSEN AFB, Guam

At 2:45 AM EDT June 20, NATO Military activity taking place in the Baltics

At 4:23 AM EDT June 20,  – We are beginning to receive information from our European sources that several fighter launches have taken place in Europe. Unknown if related to the current situation or for a drill.

U.S. and Russian forces are in the air, likely moving to control points. We have no reports of any engagements. Domestic assets are moving into defensive positions.

American and Russian fighter jets had a tense showdown in the skies above Syria as the Russians dropped bombs on U.S.-backed rebels.

U.S. and Russian fighter jets bloodlessly tangled in the air over Syria on June 16 as the American pilots tried and failed to stop the Russians from bombing U.S.-backed rebels in southern Syria near the border with Jordan.

The aerial close encounter underscores just how chaotic Syria’s skies have become as Russia and the U.S.-led coalition work at cross-purposes, each dropping bombs in support of separate factions in the five-year-old civil war.

The near-clash also highlights the escalating risk of American and Russian forces actually coming to blows over Syria, potentially sparking a much wider conflict between the world’s leading nuclear powers.

The incident began when at least two twin-engine Su-34 bombers, some of Moscow’s most advanced warplanes, struck what the Pentagon described as a “border garrison” housing around 200 U.S.-supported rebels in At Tanf on the Syrian side of the Syria-Jordan border.

The rebels had been “conducting counter-ISIL operations in the area,” the Pentagon stated on June 18, using an alternative acronym for ISIS.

The United States and its allies in Syria clearly did not expect the air strike. The rebels in At Tanf are party to a shaky ceasefire agreement between rebel forces and the regime of Syrian president Bashar Al Assad—and, by extension, the Russian military contingent backing Al Assad. The Los Angeles Times reported that Russian planes had not previously been active over At Tanf.

The Su-34s’ initial strike wounded, and perhaps killed, some of the rebels in At Tanf.

The U.S. Navy scrambled F/A-18 fighters to intercept the Russians, the Los Angeles Times reported. The Navy has deployed two aircraft carriers to the region for strikes on ISIS. As the F/A-18s approached the Su-34s, officials with U.S. Central Command—which oversees America’s wars in the Middle East and Afghanistan—used a special hotline to contact their Russian counterparts directing Russia’s own intervention in Syria.

Arriving over At Tanf, the American pilots apparently spoke directly to the Russian aviators. “Pilots CAN communicate with one another on a communications channel set up to avoid air accidents,” Central Command confirmed in a statement to The Daily Beast.

Washington and Moscow had established the hotline as part of a so-called “Safety of Flight Memorandum of Understanding” that the two governments signed in October specifically in order to avoid the kind of aerial confrontation that occurred over Syria last week.

With the American jets flying close enough to visually identify the Su-34s, the Russians departed the air space over At Tanf. Some time shortly thereafter, the F/A-18s ran low on fuel and left the area in order to link up with an aerial tanker. That’s when the Su-34s reportedly returned to At Tanf —and bombed the rebels again.

According to the Los Angeles Times, the second strike killed first-responders assisting survivors of the first bombing run.

“Department officials expressed strong concerns about the attack on the coalition-supported counter-ISIL forces at the At Tanf garrison, which included forces that are participants in the cessation of hostilities in Syria, and emphasized that those concerns would be addressed through ongoing diplomatic discussions on the cessation of hostilities,” Defense Department spokesman Peter Cook explained in a statement.

Russian Defense Ministry spokesman Igor Konashenkov confirmed, via the country’s state-owned media, that the teleconference took place—but he did not specify the results of the “extraordinary” meeting.

Russian warplanes had previously shadowed planes belonging to the U.S.-led coalition over Syria, but the coalition always described the Russians’ behavior as “professional.” By contrast, in April Russian Su-24 bombers repeatedly buzzed the U.S. Navy warship USS Donald Cook while the vessel sailed in international waters in the Black Sea. A Pentagon spokesman called the Russians’ actions in that incident “provocative and unprofessional.”

The Kremlin should be keenly aware of the potential for unwanted—and potentially destabilizing—bloodshed that exists in the air over Syria. In November, a Russian Su-24 bomber flying a mission over Syria strayed over the Syria-Turkey border into Turkey—and a Turkish F-16 fighter promptly shot it down.

The two Russian crew members ejected. One flier died when Syrian rebels on the ground opened fire on his parachute. Russian, Syrian and Iranian forces launched a complex rescue mission that ultimately retrieved the surviving pilot. One Russian marine died and a helicopter was destroyed during that operation.

The fallout from the November incident continues, with Russia and Turkey exchanging threats—and Moscow imposing economic sanctions on Ankarra including limits on some food imports to Russia from Turkey.

It’s not clear how close the U.S. fighters came to attacking and potentially shooting down the Su-34s over At Tanf. Central Command declined to say what the rules of engagement are for American pilots flying over Syria. “ROE are actually specifics that we don’t get into,” Central Command said in a statement.

At 4:32 AM EDT June 20,  A huge explosion has struck an ammunition depot at a military firing range in southern Russia. The Defense Ministry said around 600 people have been evacuated.

The incident took place at Ashuluk testing range near the city of Astrakhan in southern Russia.

As of 6:28 AM EDT  June 20,  Confirmation that there are heavy troop and equipment movements in Europe and in Russia. It seems to be a show of force. The military are not saying anything, but the rumor mill believes that there has been a strike by Russia on American Rebels in Syria overnight, which has led to a war of words.

At 2:30 PM EDT June 20,  From what we can tell, most of what occurred last night is still on going. We still do not have much information as to what is happening

As of 3:00 PM EDT June 20, We can confirm that NATO E-3A Dentry aircraft have been operating over Poland almost all day, with heavy electronic spying on Russian forces as shown on map below:

As of 3:30 PM EDT — Russian defense ministry confirms officially “troop movements” right across Russia, they are calling it an enormous “exercise.”  To reiterate the Russians themselves are now confirming massive troop movements across Russia

As of 3:41 PM EDT — The State Department and Pentagon ordered the families of U.S. diplomats and military personnel Tuesday to leave posts in Turkey.

The two agencies said dependents of American staffers at the U.S. consulate in Adana, the Incirlik air base and two other locations must leave. The so-called “ordered departure” notice means the relocation costs will be covered by the government.

Pentagon press secretary Peter Cook said it was being done “out of an abundance of caution” for the safety of the families in that region. He said he was not aware of a deadline for the families to leave, but said “this will move very quickly.”

In a statement, the military’s European Command said the step “allows for the deliberate, safe return of family members from these areas due to continued security concerns in the region.”

The orders cover the Adana consulate, U.S. military dependents in Incirlik, Ismir and Mugla as well as family of U.S. government civilians at Ismir and Mugla. The State Department also restricted official travel to that which it considers “mission critical.” Cook said that the order does not affect about 100 family members who are based in Istanbul and Ankara.

Trainloads of heavy military equipment are now being reported as “on the move” in many, many, locations throughout the USA.

A rail-trail loaded with tons of military vehicles and equipment was spotted and filmed at the Cajon Pass, between So. Cal’s San Bernardino Mountains and the San Gabriel Mountains TODAY:

The equipment seen in the video above consists of Bradley’s,  MRAP (RG-33), Armored Recovery Vehicles based off Abrams and Patton (M88), M9 CEV’s, M777 Howitzers, HEMTT and FMTV Trucks

At 4:11 PM EDT  — SuperStation95 has confirmed with our sources in the Pentagon and in the State Department that the United States has decided to “move forward with plans to strike Syrian President Bashar Assad’s command and control systems and conduct limited strikes on other Syrian assets.”

We have also confirmed with those same sources that, upon being informed of this, Russia made made it explicitly clear they will DEFEND SYRIA by engaging and destroying anyone attempting to attack their ally, President Bashar Assad.