The Knights Templar And The Pharaohs The Knights Templar And The Pharaohs

_
Michelle Walling – François Bérenger Saunière was a priest in the French village of Rennes-le-Château from 1885-1909 and discovered documents hidden in his church showing the genealogy of the Merovingians going back to Jesus and Mary. He also found evidence of a treasure.

The treasure of the Knights Templar was the Robe of Jesus, the Grail, the Ark of the Covenant, the last remaining pieces of the Cross of the Crucifixion, and some Bones.

The documents showed that Jesus was married to Mary Magdalene and had children who grew up in southern France. The descendants of Jesus and Mary intermarried with Sicambrian Franks and founded the Merovingian royal lineage. Mary was nine years younger than Jesus and at age 30 she had a daughter named Tamar, four years later gave birth to Jesus Justus and in 44 A.D. at age 41, she had a second son named Josephes. That same year Jesus and Mary agreed to a separation and parted. Mary moved to France, established the first nunnery and died in Acquae Sextiae in 63 A.D.

Jesus had seven siblings named James, Joses, Juda, Simon, Mary, Salome and Joanna, which, along with all their descendants were identified as the Desposyni by the Vatican and treated as enemies of the church. The condemnation of Mary Magdalene as the sinful harlot, the Donation of Constantine, and the papal annihilation of the Cathars during the Albigensian Crusade were all in response to this perceived threat that the Grail Family posed to the power structure of the church. Dual Grail Family succession (descended from Jesus and James) ended with the death of King Arthur. Interestingly, James was also known as Joseph of Arimathea.

Jmmanuel (Jesus) lived in India. He did not die on the cross. His real father was an extraterrestrial Pleiadian named Gabriel (who also helped create the Islamic faith). Jmmanuel was known as Yuz Asaf to the Muslims and to the Indians he was known as Isa. There is a place in Syria near Damascus called Mayuam-i-isa which means “the place where Jesus lived.” Accounts of his survival come from the Talmud of Jmmanueland from the Ahmadiyyan religion of India. The latter further depicts Jesus spending the last part of a long life in the Kasmir region and being buried in Srinagar where there is still a tomb venerated as his. There are at least 21 historical documents that bear witness to his having lived in Kashmir, India.

However, the Jesus figure created at the Council of Nicea for the Roman Catholic Church was not based on any specific historical figure. The Church, at the direction of Emperor Constantine, created a composite being with the traits of many different messianic figures.

Immediately after founding the Christian religion, emissaries were sent out to all eastern countries to destroy the ancient records. Thousands of libraries were destroyed and in 390 A.D. a large portion of the Library of Alexandria was also destroyed. In 640 A.D. the library was totally destroyed to keep it out of the hands of the new religion called Islam. The proof of deceit was nearly wiped from the earth.

The Prieure de Sion (Priori of Sion) was the religious order that set for itself the goal of preserving the ancient knowledge handed down from the Sumerian gods to Noah and subsequently to Abraham, Solomon and Moses. It brought the secret knowledge back to Europe from the Holy Land at the time of the Crusades and it was passed down through the Order and the Mason guilds.

The Knights Templar was founded during the 12th century in Jerusalem by the Prieure de Sion for the purpose of excavating the Temple site in Jerusalem and removing the treasure. In 1127 they completed their work and moved the treasure to their Chapter House in Paris. The Biblical Ark was moved to Ethiopia. The knowledge of the Ark was placed in the Chartres Cathedral.

Abraham was said to possess the “Tablets of Testimony” which represented all the knowledge handed down from the time of Noah.

Noah obtained them indirectly from his father, ENKI, the god of the Sumerian civilization. It provided King Solomon with his vast wisdom. The cipher of the tablet was called the Qabala (or Cabala). If you obtained the knowledge of the Qabala you possessed the Ram, which is the highest expression of cosmic knowing or universal aptitude.

The Great Secret of the Cabala was that physical matter can be transformed by the use of incantations of ancient Hebrew letters and numbers and that the nature of reality is an illusion. It wasn’t just about turning lead into gold; it was about turning anything into anything.

This mystical knowledge passed through Mesopotamia and Palestine and into medieval Europe, where it first appeared in the writings of Moses de Lion, a Spanish Jew.

We are now at a defining point in history. The Knights Templar brought the secret knowledge back to Europe from the Holy Land at the time of the Crusades and it was passed down through the
Order and the Mason guilds which included Freemasonry, the Rosicrucians and the Illuminati. It was to be given to the people in the “End Times” to get ready for what was to come.

There will be no messianic second coming because of what happened in the past. There were great hopes that the Nazarene would be successful in raising the consciousness of the planet but the Jewish people failed to accept him as their leader. The crucifixion was not intentional. This will not be repeated. This time many will come to raise consciousness. Man will finally realize that the god he seeks is himself. 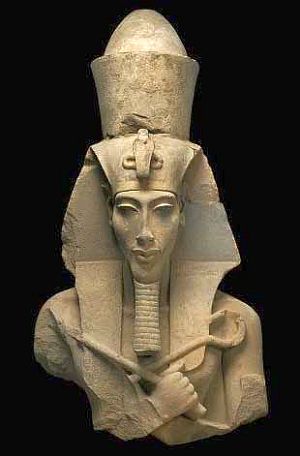 Moses and Akhenaton were the same person. Akhenaton was an Egyptian pharaoh and was the father of King Tut (Tutankhamen). Akhenaton was born to Tiye and Amenhotep III, was saved by the royal midwives in a reed basket, was discovered by distant relatives downstream (Lower Egypt) and reared by Tiye’s sister-in-law Tey of the (Jewish) House of Levi. He received his religious education at Heliopolis and married his half-sister Nefertiti which placed him in line for the throne.

When Amenhotep III died, Amenhotep IV succeeded him and changed his name to Akhenaton (spirit of the Sun). Because he had been taught by the Jewish one god belief system, he discarded the pleuristic deities of the Egyptians and created his own city (Amarna) away from the temples of Egypt and worshiped as he was taught.

Because of the powerful priesthood, he was forced to abdicate and in 1361 B.C. was banished from Egypt. He gathered his friends and relatives and fled to the Nile delta on foot, being chased by men on horses that foundered in the marshes. His supporters, believing him the rightful heir, called him Mosis, meaning ‘heir’. It was a title, not a name. His descendents cemented the succession to the Royal House of Judah.

Abraham and Amenemhet I were the same person. Amenemhet I was an Egyptian Pharaoh who ruled from 1991 B.C. through 1962 B.C. He seized the throne after assassinating Pharaoh Mentuhotep IV. Explorer Antonio Lubolo discovered his identity in 1818 A.D. after finding his tomb near the Valley of the Kings in Egypt. The documents placed in the tomb clearly referred to Abraham and showed him sitting on the throne. The tomb of Amenemhet I is currently the only royal tomb to which public access is forbidden. The word Amenemhet means “Amen is the Head.”

The God of the Jews was known variously as Ra, Amun-Ra, Amun, Amon, Amon-Ra, Omen, Omen-Ra, Amen, Amen-Ra and others. He was also the same being as Marduk, the first son and heir to the “Lord of Earth”, EN.KI. The Jewish people still worship the god of the Old Testament, and references to Amen-Ra were often contained in the original names of their patriarchs, such as Amenemhet, Amenhotep and Si Amun.

The Ark of the Covenant was designed after a Royal Egyptian Conoptic Chest. It was presented to Abraham by the Priest Melchizedek as a gift from Marduk. It carried and produced Philosophers Stone (a.k.a. white stone, monatomic gold, ORME, mfkzt, “Bread”, manna, the “food of the gods”, the Golden Fleece, the divine mystery of the Holy Grail),an exotic substance that, when ingested, links consciousness with the One and extends life. It was given to the Pharaohs to give them god-like powers. Akhenaten (a.k.a. Moses) and the Nazarene used it in the mystery schools (Essenes). Moses stole the Ark when he left Egypt, which is why he was pursued by men on horses. The Jewish elite through the ‘Son’s of Levi’ carried the Ark into battle following the Exodus from Egypt. Through an attached Osiris Device its energy could be directed by the conscious intent of an adept. It could levitate and defy all known parameters of space and time.

“To him that overcometh will I give to eat of the hidden manna, and will give him a white stone, and in the stone a new name written, which no man knoweth saving he that receiveth it.” – Revelation 2:17

Many other Jewish patriarchs were also Pharaohs. King Solomon has been identified with Pharaoh Siamun (978-959 B.C.). The word Siamun means the “Son of Amun.” He was the last ruler to use the power of the Ark to create mfkzt.

Amun-Ra (Marduk) wasn’t a particularly nice guy. The only obvious reason that the Jewish people have identified themselves with him was because of his Covenant with Abraham. He killed Egyptian children and spread plagues, famine and pestilence. He called himself a jealous God; he was angry, hateful and violent.

There is an obelisk planted in the middle of Saint Peter’s Square at the Vatican. An obelisk is a pagan symbol of fertility (phallus) and also a symbol of the god Amun-Ra. The Vatican’s obelisk came from Egypt. What would otherwise appear to be an outrageous display of paganism on the part of the Vatican is actually a symbol of the God of the Old Testament.

All the major religions came from Sumer (Iraq). The Sumerian, Babylonian and Egyptian stories of the Old Testament were edited and rewritten to create a history and religion called Judaism. The New Testament stories created the religion called Christianity, which is the Babylonian religion of Sun worship. The Trinity of Enki (the father), Adapa (son), and Inanna (virgin mother) were transposed into the Holy Family (Joseph, Jesus and Mary).

Islam is an offshoot of Christianity. Hinduism, Buddhism and Zoroasterism all emerged from the Middle East regions that were under the control of Sumer.

Inanna figures include Isis, Ishtar, Aphrodite, Venus, Diana, Semiramis, Athena, Minerva, Hera and Juno. The Easter egg comes from the story of Ishtar coming to Earth from the Moon in an egg. The image of Semiramis (Slave-Queen of Sumeria) is depicted in the Statue of Liberty in New York.

Enki figures include Osiris, Baal, Molech, Saturn, Nimrod, Janus and Pan. Nimrod (King of Babylon) was the god of the Sun and the ruler of Earth. He was conceived on Easter and born on Christmas day. Sunday was the day of “Sun” worship.

Adapa figures include Horus, Christ, Buddha, Krishna, Muhammad, Mithra, Dionysus, Bacchus, Tammuz, Odin, Zoroaster, Indra, Bal, Cadmus, Adonis and Prometheus. Horus was the sun of Osiris or the Sun of a god. The “all-seeing eye” is the eye of Horus.

The god-mother-child religions have been used to implant a false history, suppress knowledge and divide and rule the masses.