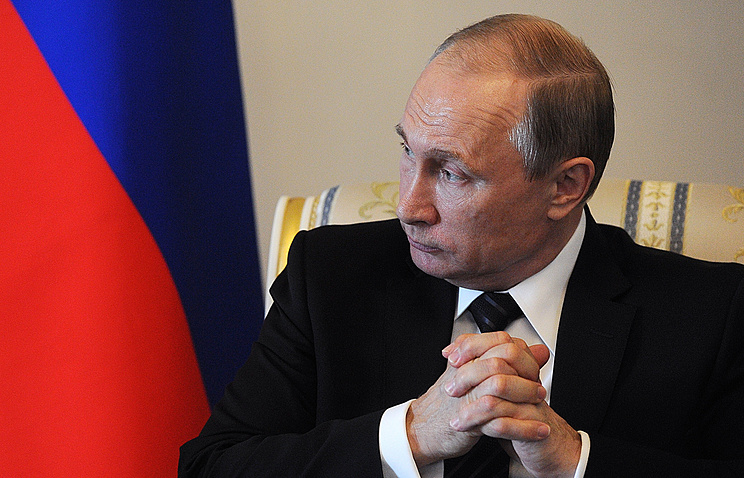 MOSCOW, June 23. /TASS/. Cooperation of Moscow and Beijing in global affairs is an important element of global stability, Russian President Vladimir Putin said in an interview with China’s Xinhua news agency shortly before his visit to China on June 24-25.

“Today the very fact that China and Russia collaborate in international affairs contributes to the stability of world affairs,” Putin said. “Apart from our joint work in the Shanghai Cooperation Organization, we cooperate within BRICS, which in fact was jointly established by us, and we actively collaborate at the UN.”

“Let me remind you of the statement made by the President of the People’s Republic of China at the 70th anniversary of the United Nations. Think back and recall it. That statement called for resolving all contentious issues only by peaceful means on the basis of international law,” he said.

“Furthermore, the president was among the few who declared that they were ready to help those in need and even specified those proposals. It is such approaches that unite us in international affairs, not merely the geographic proximity of our countries,” Putin said.

“Today, we are particularly pleased that this has happened, since our views on international affairs, as diplomats say, are either very similar or coincide. At the same time, this similarity or coincidence is backed by concrete work, including efforts on the technical level,” he said.

“We are in constant contact and we consult on global and regional issues. Since we consider each other close allies, naturally, we always listen to our partners and take into account each other’s interests,” Putin said.

Vladimir Putin also said that Russia and China were taking measures to improve the structure of bilateral trade.

The Russian president reminded that 25 years ago the two countries announced the launch of new relations, those of strategic partnership, and 15 years ago, they signed a friendship and cooperation treaty. “Since then, hard work has been done resulting in an unprecedented level of mutual trust on which our collaboration is built,” he stressed.

However, he admitted that the recent problems in the world economy have told on Russia-China cooperation, “leading to a certain drop in the total trade turnover.” “But we are convinced that it is a temporary phenomenon resulting from the current situation with certain goods and the exchange rate,” he said. “Nevertheless, we manage to settle the key issues. We manage to take major steps to improve our trade structure.”

Thus, in his words, Russia’s exports of engineering products to China has increased by 44% over the past year. “In this regard, one of the most important directions is of course the diversification of our ties, making them more sophisticated, paying more attention to the high-tech area of our collaboration,” Putin said.

According to the Russian leader, Russia and China are working together “on space programs, in the sphere of aviation, on the construction of a wide-body aircraft and a heavy helicopter.” “We collaborate on environmental issues, and carry on with large-scale energy projects, including in nuclear energy,” he added.

Russia-China nuclear energy cooperation should not be confined only to the construction of new nuclear power plants in China but also include closer scientific and technical collaboration, the Russian president went on to say.

He noted that Russia’s Rosatom, a state-run nuclear corporation, has a big portfolio of orders on the Chinese market. “The two units of the Tianwan Nuclear Power Plant have been operating for 8 years now, and have proved reliable,” Putin said.

“We are currently working on another two units, and I think more could be done. We should enhance our cooperation not only in terms of increasing the number of nuclear power plants in China but also by expanding our scientific and technical collaboration in this area,” Putin said.

Speaking about cooperation between the two countries in the energy sector in general, the Russian president noted China’s increasing presence on the Russia energy market. “It is a major shareholder in one of our significant projects, Yamal LNG, and it has acquired 10% of the shares in one of our leading chemical holdings, SIBUR,” he said. “We welcome these Chinese investments not only as a means of placing financial resources but also as a means of further developing our partnership.”

Another area of Russia-China cooperation is the development of infrastructure. As an example, the Russian president cited the Moscow-Kazan high-speed railway project. “Intensive work is underway on the famous Moscow-Kazan High-Speed Rail Line Project. Some railway sections will allow for a train speed of up to 400 kilometers per hour. We pay considerable attention to these prospects; this can be only the beginning of our large-scale infrastructure cooperation,” Putin said.