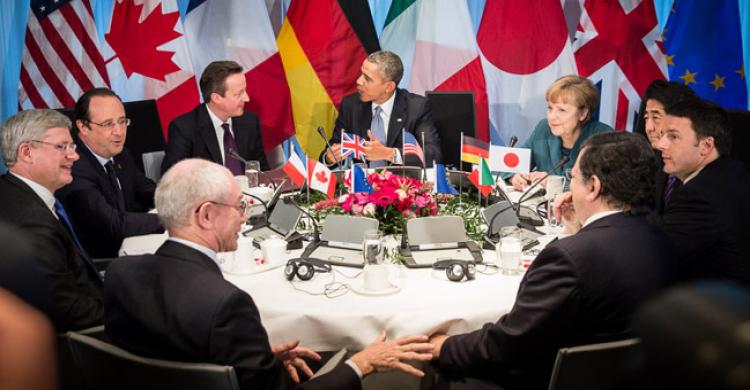 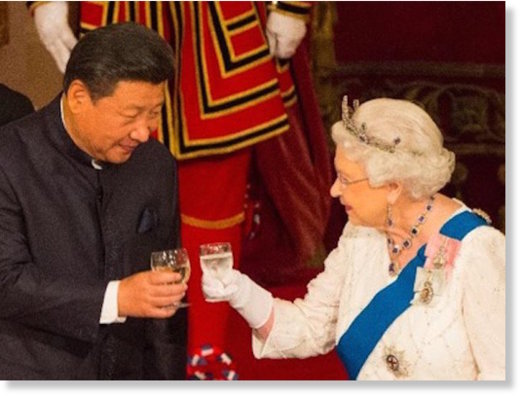 Favourable to the Brexit, Queen Elizabeth is now able to reorient her country towards the yuan.

No-one seems to comprehend the consequences of the British decision to leave the European Union. Those commentators who interpret party politics, and who forfeited their understanding of international challenges a long time ago, have been concentrating on the elements of an absurd campaign – on one side, the adversaries of uncontrolled immigration, and on the other, the «bogeymen» who have been threatening the United Kingdom with the direst of torments.

But the stakes of this decision have nothing to do with these themes. The discrepancy between reality and the discourse of the political media illustrates the disease from which the Western elite is really suffering – their incompetence.

While the veil is being ripped apart before our eyes, our elites do not understand the situation any better than the Communist Party of Soviet Russia could see the consequences of the fall of the Berlin Wall in November 1989 – the dissolution of the USSR in December 1991, then the Council for Mutual Economic Assistance (Comecon) and the Warsaw Pact six months later, followed by the attempts to dismantle Russia itself, in which it almost lost Chechnya.

In identical fashion, we will soon be witnessing the dissolution of the European Union, then NATO, and unless they pay close attention, the dismantling of the United States.

What interests are behind the Brexit?

Contrary to the boastful claims of Nigel Farage, UKIP was not the originator of the referendum it has just won. The decision was imposed on David Cameron by the members of the Conservative Party.

For them, London’s policy must be a pragmatic adaptation to the evolution of the world. This «nation of shop-keepers», as Napoleon qualified it, observes that the United States are no longer either the world’s prime economy or its major military power. There is therefore no further reason to hang on as their privileged partner.

Just as Margaret Thatcher never hesitated to destroy British industry in order to transform her country into an international financial centre, in the same way the Conservatives did not hesitate to open the door for the independence of Scotland and Northern Ireland – and thus the loss of North Sea oil – in order to transform the City into the primary off shore financial centre for the yuan.

The Brexit campaign was largely supported by the Gentry and Buckingham Palace, who mobilised the popular Press to call for a return to independence.

Contrary to the interpretations published in the European Press, the departure of the British from the EU will not happen slowly, because the EU will collapse faster than the time necessary for the bureaucratic negotiations concerning their withdrawal. The Comecon states did not have to negotiate their exit, because the Comecon had ceased to function as soon as the centrifugal movement began. The member states of the EU who hang on, desperately trying to save whatever remains of the Union, will fail in their adaptation to this new distribution, and run the risk of experiencing the painful convulsions of the first few years of the new Russia – a vertiginous drop in the standard of living and life expectancy.

There is an urgent need to reform the institutions in order to save the hundred thousand civil servants, elected officials and European collaborators who will inevitably lose their jobs, and the national elites who are also tributary to the system. All of them wrongly believe that the Brexit has opened a breach into which the Euro-sceptics will plunge. But the Brexit is only a response to the decline of the United States.

The Pentagon, which is currently preparing the NATO summit in Warsaw, has not yet understood that it is no longer in a position to browbeat its allies into increasing their Defence budget and backing up their military adventures. Washington’s domination of the world is over.

We are moving into a new era.

What is going to change?

The fall of the Soviet bloc was first of all the death of a certain vision of the world. The Soviets and their allies wanted to build a united society in which as many things as possible were to be considered common property. They succeeded in creating a Titanic bureaucracy and a grim bouquet of comatose leaders.

The Berlin Wall was not destroyed by anti-communists, but by a coalition of the Communist Youth and the Lutheran Churches. Their intention was to refound the Communist ideal, but liberated from the Soviet yoke, the political police and the bureaucracy. They were betrayed by their elites, who, after having long served the interests of the Soviets, did an eager about-face and rushed to serve the interests of the United States. The most passionate of Brexit voters are attempting to regain their national sovereignty, and make the leaders of Western Europe pay for the arrogance they showed in imposing the Treaty of Lisbon after the popular rejection of the European Constitution (2004-07). They too may be disappointed by what comes next.

The Brexit marks the end of the ideological domination of the United States, that of the dime-store democracy celebrated as the «Four Freedoms». In his address on the State of the Union in 1941, President Roosevelt defined them as (1) Freedom of Speech and expression, (2) the Freedom of all people to honour their God in the way they choose, (3) Freedom from need, (4) Freedom from Fear [of foreign aggression]. If the English are going to return to their traditions, continental Europeans are going to revisit the questions posed by the French and Russian revolutions concerning the legitimacy of power, and shake up their institutions at the risk of sparking a new Franco-German conflict.

The Brexit also marks the end of the military-economic domination of the US, since NATO and the EU are simply the two sides of a single coin – even if the construction of their Foreign Policy and Common Security took longer to implement than that of free exchange. Recently, I was writing a note on this policy in terms of the situation in Syria. I examined all the internal documents of the EU, both public and unpublished, and arrived at the conclusion that they had been written without any knowledge of the reality on the ground, but from notes taken by the German Minister for Foreign Affairs, who was himself reproducing the instructions of the US State Department. A few years earlier, I had to do the same job for another state, and had arrived at a similar conclusion (except that in this other case, the intermediary was not the German, but the French government).

First consequences within the EU

Currently, the French trade unions are rejecting the project for a law on Labour which has been drawn up by the Valls government on the basis of a report by the European Union, which itself was inspired by instructions from the US State Department. While the mobilisation of the CGT (General Confederation of Labour) has enabled the French people to discover the role of the EU in this affair, they still have not grasped the EU-USA connection. They have understood that by inverting the standards and placing company agreements above branch agreements, the government was in fact questioning the preeminence of the Law over the contract – but they do not know about the strategy of Joseph Korbel and his two children, his natural daughter, the Democrat Madeleine Albright, and his adopted daughter, the Republican Condoleezza Rice. Professor Korbel assured that in order to dominate the world, all Washington needed to do was impose a re-writing of international relations in Anglo-Saxon legal terms. Indeed, by placing the contract above the Law, Anglo-Saxon legalese privileges, in the long term, the rich and powerful over the poor and needy.

It is probable that the French, the Dutch, the Danes and others will try to detach themselves from the EU. For that, they will have to confront their ruling class. Though the duration of this combat is unforseeable, its issue leaves no doubt. In any case, in the period of upheaval which is coming, the French workers will be difficult to handle, unlike their English counterparts, who are currently disorganised.

First consequences for the United Kingdom

Prime Minister David Cameron played the summer holiday card in order to postpone his resignation until October. His successor, probably Boris Johnson, therefore has the time to prepare the change which can be implemented as soon as he arrives at Downing Street. The United Kingdom will not wait for its definitive exit from the EU to develop its own policy – to begin with, dissociating itself from the sanctions levied against Russia and Syria.

Contrary to what the European Press claims, the City of London is not directly concerned by the Brexit. Because of its particular status as an independent state placed under the authority of the Crown, it has never been part of the European Union. Of course, it will no longer be able to shelter the head offices of certain companies which will retreat back into the Union, but on the contrary, it will be able to use the sovereignty of London to develop the yuan market. Already in April, it obtained the necessary privileges by signing an agreement with the Central Bank of China. Besides which, it may develop its activities as a fiscal paradise for Europeans.

While the Brexit will temporarily disorganise the British economy while it waits for a new set of rules, it is probable that the United Kingdom – or at least England – will reorganise rapidly for its own greater profit. We’ll have to wait and see if the creators of this earthquake will have the wisdom to share its rewards with their people. The Brexit is a return to national sovereignty, but it does not guarantee popular sovereignty.

The international landscape may evolve in many different ways according to the coming reactions. But even if things turn out badly for some people, it’s always better to adhere to reality, as the British have done, rather than clinging to a dream until it shatters.