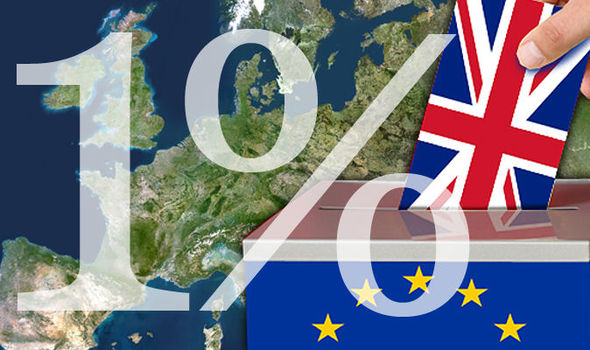 The bombshell survey, by respected pollsters TNS, shows Brexit has surged ahead by 49 per cent to 42 per cent once people’s likelihood to vote is taken into account.

It will send shockwaves through Downing Street tonight, which has shown increasing signs of nerves over how the referendum will pan out amid fierce criticism of David Cameron’s Project Fear campaign.

Analysts at the firm surveyed 2,320 adults across the UK online between June 16-22. Their baseline results reveal a two per cent lead for the Leave campaign, with support for Brexit at 43 per cent compared to 41 per cent for Remain.

However, experts say that once the result is adjusted to take into account respondents’ stated likelihood to vote the Brexit camp’s lead grows to a cavernous seven points.

Luke Taylor, Head of Social and Political Attitudes at TNS UK said: “With many members of the public still undecided or not planning to vote there is uncertainty around the outcome of the referendum.

“Clearly, with a race as close as this, the turnout level among different demographic groups will be critical in determining the result.” The bombshell survey was released just hours after a separate poll by Opinium revealed a one per cent lead for the Leave campaign.

In the analysts’ final survey before polling stations open at 7am tomorrow, 45 per cent said they would vote to Leave the EU with 44 per cent wanting to Remain in the 28-country bloc.

Nine per cent of those asked said they still did not know how to vote, suggesting as yet undecided Britons will be key to Friday morning’s result.

Two per cent did not want to declare which way they will vote.

The pollsters said the narrow margin between Leave and Remain means the EU referendum is a “statistical dead heat” with both side within the margin of error of the other.

More than 3,000 British adults were quizzed online between Monday and today.

A survey for YouGov recorded 51 per cent support for Remain and 49 per cent for Leave whilst a poll by ComRes, which falls well outside the standard margin of error of plus or minus three points, shows Remain on 54 per cent and Leave on 46 per cent.

Both sides of the EU referendum debate have been out campaigning today in a last-ditch effort to persuade voters before they enter polling booths tomorrow.David Cameron teamed up with former prime minister John Major and ex-Labour deputy leader Harriet Harman to urge Britons to Remain in the EU.

Leading the fight for Brexit both Boris Johnson and Michael Gove were out campaigning for Vote Leave, while Ukip leader Nigel Farage delivered a final impassioned speech in London.

Yesterday, a YouGov poll showed a majority of voters want Britain to quit the EU.

The survey, excluding undecided voters, revealed 51 per cent will vote to Leave the EU on with 49 per cent saying they will vote to Remain.

But an ORB poll published on the same day  found support for Remain at 53 per cent with support for Leave at 46 percent.

A series of final polls are expected to be published tonight.The poll result will come as a huge blow to David Cameron