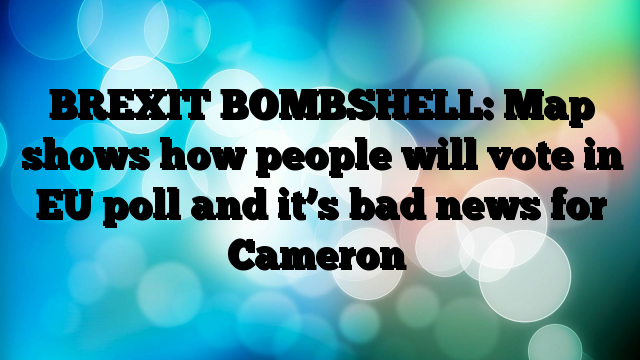 Most of England wants to see an end to EU supremacy over the UK according to a landmark survey gauging the mood of the nation ahead of the upcoming in/out referendum.The bombshell research will send shockwaves through Westminster and is a crushing blow to Mr Cameron’s pro-Brussels campaign, which has been beset by PR gaffes and accusations of fearmongering.
Respected pollsters YouGov asked 80,000 Britons how they intend to vote in the referendum on Britain’s membership, to take place on June 23.Their shock results show that the further south in Britain you live the more likely it is that you are a Eurosceptic, with most of England now backing a Brexit.

The feedback is significant because, according to the survey, many of the most densely populated parts of the UK are staunchly in favour of severing ties with Brussels.In contrast more pro-EU areas, including Scotland and Wales, have much smaller populations in comparison.
The top ten most eurosceptic areas are all found in England with Havering in London, Peterborough in Cambridgeshire and Bracknell in Berkshire making up the top three.There has also been a surge in anti-EU feeling in England’s eastern counties, Wales and the south-west.

The YouGov research also revealed working class areas were more anti-EU, blowing a hole in Labour’s insistence on backing Brussels against the wishes of its traditional voter base. The top ten most eurosceptic areas are all found in England

Brexit support is also strong in the more wealthy Tory counties of England like Suffolk, Somerset and Lincolnshire, showing that a concensus is now building behind the case to get Britain out of the EU.On the other hand, areas most supportive of the EU were found in metropolitan areas, Scotland and university cities

Five of the most europhile areas were in London including wealthy left-leaning boroughs like Camden, close to where Labour leader Jeremy Corbyn lives.

University cities such as Liverpool, Manchester, York and Bristol were more likely to favour staying in the EU.

The survey comes as a war of words continues to break out among politicians in the competiting campaigns.

Prime Minister David Cameron has issued stark warnings for voters if they opt for Brexit, claiming the UK’s “economic and national security” will be in danger. YouGov asked 80,000 Britons have they intend to vote in the referendum Working class areas have been linked to Brexit support

He has repeatedly described the move as a “leap in the dark” but critics have dismissed his claims as scaremongering, labelling his campaign ‘Project Fear’.Chancellor George Osborne has described leaving the EU as an “enormous economic gamble”, but that argument was dismissed by London Mayor Boris Johnson who has come out in favour of a Brexit.

He said: “Are you frightened? Have they spooked you yet? It is now obvious that the Remain campaign is intended to provoke only one emotion in the breast of the British public and that is fear.”

The popular Tory MP said the threats to security are “so wildly exaggerated as to be nonsense”.

He added the people issuing “blood-curdling warnings” against Brexit are often the very same people who “prophesied disaster if Britain failed to join the euro”.

Scotland’s first minister Nicola Sturgeon, who is firmlyin the Remain camp, has also warned Cameron against fighting a “miserable, fear-based” campaign.The SNP leader pledged to make a “positive, constructive” case for staying in the Brussels club.

February’s net migration report revealed near record levels of 323,000 in the year to September – far short of the government’s goal of 100,000.

The Prime Minister has desperately tried to claim his EU deal would help limit migration.

The EU referendum will be held on Thursday, June 23.