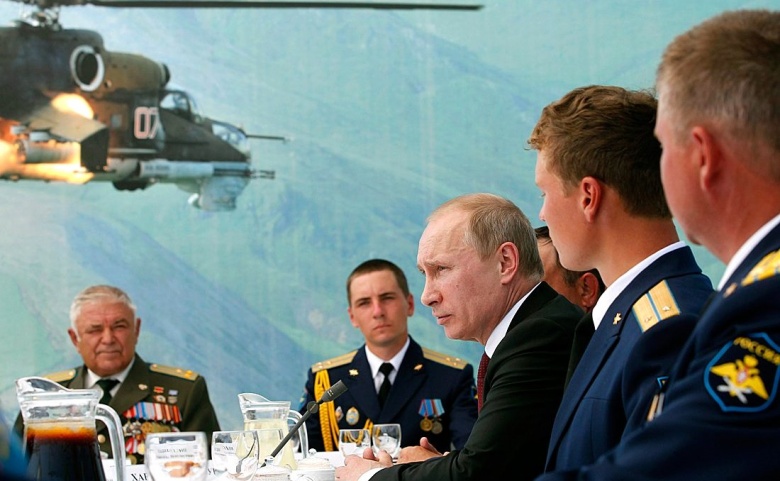 SOTN Editor’s Note:
The following open letter is quite noteworthy because it was written by a Syrian insider who has high integrity knowledge of the current state of affairs throughout Syria and the Northern Levant.  The details outlined of the present military calculus within Syria is indisputably accurate.  So is the overall geopolitical assessment.  One wonders, then, why Russian President Vladimir Putin has given the enemies of the Syrian people another opportunity to regroup and make even more mischief.

The ongoing Russian military strategy is both inscrutable and questionable.  Only more death and destruction of innocent people will result.  Hence, Dr. Bassam Habib Baraka has stepped forward to write an open letter to Russia in order to express what has been on many of our minds.

Perhaps President Putin has yet to read the previous missives about what he and his military high command are really dealing with.  Here’s an example of previous corresponsdence:

Why do Russia and China still dance with the criminally insane and psychopathic leadership of the West?

It really does appear that the Russian temperament and culture are so different from those of the West that they cannot wrap their minds around the serial criminal conduct of a stone-cold “Psychopathocracy”.  This is the essential point for Russia: That there is no way in Heaven or on Earth to effectively deal with a criminally insane and psychopathic leadership.  End of story.

Now here’s the back story:

An Abridged History Of The United States Psychopathocracy

At the risk of sounding redundant, SOTN will repeat the following advice to Russia, China and the rest of the BRICS-aligned nations.

“THERE IS ONLY ONE WAY TO EFFECTIVELY DEAL WITH A CRIMINALLY INSANE PSYCHOPATH—YOU DON’T!”

The following open letter provides further validation (from a well informed Syrian insider) that Russia needs a to do a serious reality check.  The fate of Syria hangs in the balance, and does the future of the whole Middle East.

[1] TOP 20 Websites Viewed By The Kremlin

[Editor’s Note:  This came in Arabic and Gordon had to drop what he was doing on a late Saturday afternoon to put a crew to get this translated and published.

This is a passionate letter from a man who loves his country and put into words better that we could the concerns many have about why the resupplying of the Syrian insurgents was allowed to go on during the ceasefire to put them in the position to launch counter offenses after so much had been done to put them on the defensive.

Many of us feel the whole “end game” could be changed by this turn of events. NATO members are actively engaged in supporting terrorist proxy forces in Syria and Iraq, in violation of it charter and a list of other international laws.

Citizens of countries are paying taxes to support activities done in their name that they would never approve of, yet consider themselves democracies, or pretend-a-democracies as the case may be.

We salute the good doctor for putting his words where his heart is. He is not ungrateful for what the Russians have done by any means…quite the opposite. Syria and Russia are going to win this together, or lose it together. Unless the resupply chain of the jjhadis is broken it is hard to see a positive conclusion to these hostilities… Jim W. Dean]

Each day new convoys of armored vehicles cross into Syria, other convoys, all part of internationally recognized terrorist organizations, move into battle, sustaining the siege of Aleppo. These armed terrorist convoys, easy targets for Russian Aerospace forces, move with total freedom, as though shielded from harm.

Why don’t Russian warplanes destroy them? Is Russia afraid of the feelings of Netanyahu (Jubir) (al Hamad) and those “cousins” who haunt the corridors of power in the Russian Foreign Ministry in Moscow?

Russia must learn a sad lesson from America, a nation that knows that part of being a superpower is supporting friends and allies without judgment and demands. America stands by their “friends,” Israel, Turkey, Saudi Arabia, asking no questions, making no demands, succumbing to no pressure, these are the actions of a superpower in this day and age.

Why are there so many clearly wrong decisions, such as supporting the Syrian High Negotiation Committee’s demands in Darya? We all know this is an entirely military cantonment, a breeding ground for a terrorist army on Damascus’ flank, a city without any civilian population whatsoever.

My dear friends and brothers of Russia, please do not take the example of some within Syria’s corrupt system, those officers and officials that are but thieves, the children of prostitutes, or you will become like them and the war in Syria will be lost, as with Afghanistan and Yugoslavia.

Russia will then never be able to find an ally outside her borders. It was the Empress Catherine the Great, in 1768, who warned “the Keys to the Kremlin are found in Damascus and Russia, if it remains a power of the frozen north, will wither and die.”

If Moscow is to heed the warning of Catherine, the Sukhoi storm that had swept through the terrorists’ ranks like a scythe would be unleashed again lest the Syrian War, lost to sloth, plotting and inaction, might find itself at the gates of Moscow, a gift from the Wahhabis.

The spirit that made Russia victorious after the Second World War, the spirit that help the great Russian people arise to victory will come to naught if the current policy of consulting the Zionists who brought down the great homeland in 1991 continues.  Russia will be erased from the South, forgotten in Libya, Iraq, Egypt, forgotten in Yugoslavia with Montenegro joining NATO, surrounded, plagued, isolated and “sanctioned.”

When Russia came to Syria with an air force that shook the world, when Russia plunged into battle, proving not only weapons but courage and resolve as well, the Arab kingdoms shuddered. With the shock of those overwhelming aerial attacks came not only a moral lesson but something more, the proven capability of Russian arms and a renewal of Russia as a valued supplier for weapons to offset dependence on America.

Why did you stop? The Battle of Battles, the relief of Aleppo, was within reach.

Why did you stop in Eastern Ghouta, in Deraa, in Latakia or the Homs countryside? Why?

Why did you give the terrorist time to regroup, to gain breath, to arm and reorganize themselves while the convoys your satellites and surveillance planes track day and night flow from Jordan and Turkey?

Why have you chosen not to see the threat and duplicity of the Kurds, allied with America to Balkanize Syria while Barzani, the stooge of Erdogan, does the same to Iraq?

Why do you sit at the table with your enemies, allowing talk of “Federation” and the dismemberment of Syria, something categorically rejected by the Syrian people? These people, the Syrian people, are not only your brothers in arms, but without them Russia would lose her foothold on the Mediterranean.

As Crimea is to Russia, all that stands to prevent the Black Sea from becoming an American lake, so Syria stands as well, as Catherine the Great reminds us all:

“The Keys to the Kremlin are found in Damascus and Russia, if it remains a power of the frozen north, will wither and die.”