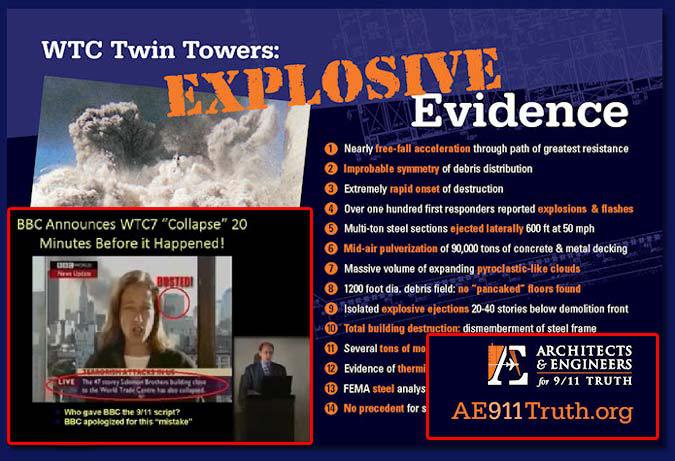 The Tyrannical U.S. Federal Government
Has Become The Enemy So that the NWO criminal cabal that controls the U.S. Government can be arrested, prosecuted and removed from power … forever.

How the 9/11 Truth Movement will bring down the U.S. Federal Government

Who can deny that the USA is now experiencing a “Second American Revolution”?

Regardless of one’s political persuasion, both Donald Trump and Bernie Sanders should be highly commended for the revolutions which they have started within their respective political parties.  Both parties are so thoroughly corrupt that they have become extremely dangerous to the American people.  Both foreign-controlled entities ought to be dissolved post haste before they completely destroy the nation.

How can such a categorical conclusion be made about the American two-party system?

Because both political parties harbor numerous powerful members and high-ranking officials who were directly involved in the U.S.-directed, false flag terrorist attacks on September 11, 2001.  There are even more members of each of the two main parties who continue to participate in the pervasive and preplanned cover-up of the 9/11 crimes against humanity, as they have done for nearly 15 years.

For the uninitiated that fastidiously planned cover-up was greatly advanced by the 9/11 Commission Report.

Without question the official 9/11 Commission Report, formally known as the “Final Report of the National Commission on Terrorist Attacks Upon the United States”, represents the most unsupported, contrived and ridiculous work of fiction ever produced by the US Federal Government.  In fact, it represents the most implausible conspiracy theory in USA history, one that was foisted on the American people, as well as on the world-at-large.  The 9/11 Commission Report details a conspiracy theory so far-fetched and full of pre-meditated fabrications that one is forced to ask the question:

“If 19 Arabs with box-cutters in hand did not perpetrate this Crime of the Millennium – under the direction of a man in a cave in Afghanistan – then who might have had the incentive, as well as the extraordinary capability, to perpetrate such an audacious attack?”
(Source: 9/11 Commission Report: The Most Ridiculous Conspiracy Theory Of All Time)

In light of the forgoing caveat, it ought to be painfully obvious that the American people have a necessary civic responsibility to fulfill.  The people cannot permit such a heinous crime against this nation to go either uninvestigated or unpunished.  To do so will only guarantee the ultimate destruction of the American Republic, as well as the continued terrorizing of the world community of nations.

It should also be obvious that a rogue group of psychopathic, criminally insane neocons/neoliberals have hijacked the U.S. Federal Government.  This camarilla is responsible for the 9/11 black operation, and much more.  In executing such a coup(s), they have marshalled the resources of the state toward implementing a covert NWO agenda of total domination of the planetary civilization.

The entire body politic can easily observe the wholesale destruction of the Middle East as evidence of their cataclysmic handiwork.  The informed reader can also view the rekindled Cold War with Russia and the implosion of the European Union through the same lens. Similarly, the travails of Latin America can be understood as outright interference by the same Anglo-American juggernaut, as can the incessant war and conflict throughout Africa and the periodic acts of terrorism carried out in Asia.

THESE are the times that try men’s souls. The summer soldier and the sunshine patriot will, in this crisis, shrink from the service of their country; but he that stands by it now, deserves the love and thanks of man and woman. Tyranny, like hell, is not easily conquered; yet we have this consolation with us, that the harder the conflict, the more glorious the triumph.
(Source: The Crisis by Thomas Paine)

For those who still do not get it, we are confronted with a terrible tyranny.  That tyranny rules from this nation’s capitol, and beyond.  It has ruled with increasing despotism since September 11, 2001 and only grows much bolder by the day in 2016.  The upcoming presidential election will only embolden those who truly control America’s destiny to accelerate their drive toward a full-blown totalitarian state.  No matter who the next president is, he or she will act like a Bush-Obama tag team on steroids.

In view of this predicament the U.S. citizenry has only one way out.  The current electoral process does not provide that way out, although it has been meticulously manipulated to lead US to believe it holds the necessary resolutions.  However, the true plight of the American people can only be successfully addressed by the citizenry performing its compulsory civic duties.  To date the citizenry has failed miserably in this regard.  This is why the nation is in unparalleled disarray, and the world community of nations is in never-ending conflict.

The ultimate civic duty for every citizenry is to hold accountable its government for crimes of high treason and state-sponsored terrorism.  Likewise, crimes against humanity should never go unaddressed.  In the case of 9/11 the guilty have yet to be prosecuted.  As long as this state of affairs continues, the nation will be plunged into a state of lawlessness and chaos.  The USA will continue to face economic instability and financial insecurity at every turn. Political upheaval and social pandemonium, racial tensions and religious conflicts will only intensify.  The resulting societal degeneracy and moral depravity will unrelentingly tear at the social fabric of this country.

Which is why 9/11 Truth is so significant.  This pervasive and ever-growing truth movement holds the key to the emancipation of the American people.  Not only has the citizenry been oppressed by those who really did it, the perps are now extremely vulnerable to the unstoppable 9/11 Truth, which is now breaking out into the open.  All that is required is for the people of conscience to sufficiently organize.

Organize, and then galvanize the electorate

First, all the movers and shakers who are in the know must put aside their political differences and coalesce around 9/11 Truth.  The same folks must also set aside any personal disagreements, if there are any which prevent genuine collaboration.  Many high-profile folks have already made common cause regarding 9/11 Truth, which is of vital importance during this pivotal and revolutionary period.

For instance, Ron Paul and Mike Gravel, Jesse Ventura and Cynthia McKinney, Dennis Kucinich and Cindy Sheehan, Jim Carrey and Rosie O’Donnell, and Sean Penn and Charlie Sheen have all shown a courageous openness to 9/11 Truth. Likewise, Democrat Tulsi Gabbard and Republican Ben Sasse have expressed their strong commitment to truth in government, no matter where it leads them.  Senator Jeff Sessions and Congressman Thomas Massie have likewise demonstrated a commitment to revealing 9/11 Truth.

It’s time for these folks, and everyone else who knows the facts about 9/11, to unify around the vital 9/11 Truth.  That does not necessarily mean the formation of a 9/11 Truth Party, mind you. However, it does mean that the people begin to demand that 9/11 truth be investigated by the U.S. Federal Government so that justice will prevail.  The citizenry, not the government, must have complete control over the new investigation.  We the People must also control the public trials and sentencing of these menaces to society.

Perhaps Jesse Ventura can launch an independent bid for the presidency during the unfolding American Spring that will feature 9/11 Truth.  By showcasing 9/11 Truth, the whole nation will be treated to the true history right in the middle of the most wild and crazy campaign season in U.S. history.  Just as Ron Paul used his presidential runs to educate and enlighten the American people about the Federal Reserve, the IRS, and the perpetual war economy, Jesse can edify and empower the electorate with 9/11 Truth. Let there be no doubt about it, unless and until the American people fully resolve the 9/11 crimes and cover-up, it will eat away at the soul of the nation.  Continued neglect to pursue the real perpetrators, and to prosecute them to the fullest extent of the law, will also guarantee a world without peace.

The choice, then, lies with the body politic.  It is their task to complete.  They can choose to do their sacred duty.  Or, they can go with the flow and not upset the [ethically unacceptable] status quo.  This decision will be the single most important undertaking in of the 3rd Millennium for the populace of the USA.  Therefore, it would be wise to proceed with great determination and serious deliberation.

One thing that the American people need to be very careful of is going down the many rabbit holes which have been created for them.  The whole 9/11 Truth movement has already seen one red herring after another.  As follows:

How exactly they pulled off 9/11 in broad daylight, and pulled down the WTC buildings, should not be the focus at this time.  The real goal is identifying who did it and determining why they did it.  Removing all the guilty parties from government (and the street) is imperative if there is to be a meaningful restoration of the American Republic.

Lastly, with great resolve every U.S. citizen needs to be transformed into “the most dangerous man in America”.

The most dangerous man in America knows — without any doubt whatsoever — that the U.S. Federal Government executed the false flag terrorist attacks on September 11, 2001.  They know that this highly calculated and synthetic form of terrorism was perpetrated to terrorize the American people into supporting a fake War on Terror.  They know that 9/11 was a multi-decade conspiracy (based on Operation Northwoods) that was perpetrated by the NWO ruling cabal as a means to foist a One World Government upon the world community of nations. They actually know this and much more about what truly happened in New York City and Washington, D.C. on that fateful day of profound betrayal and deceit.
(Source: The MOST Dangerous Man In America)