‘We are the death merchant of the world’ 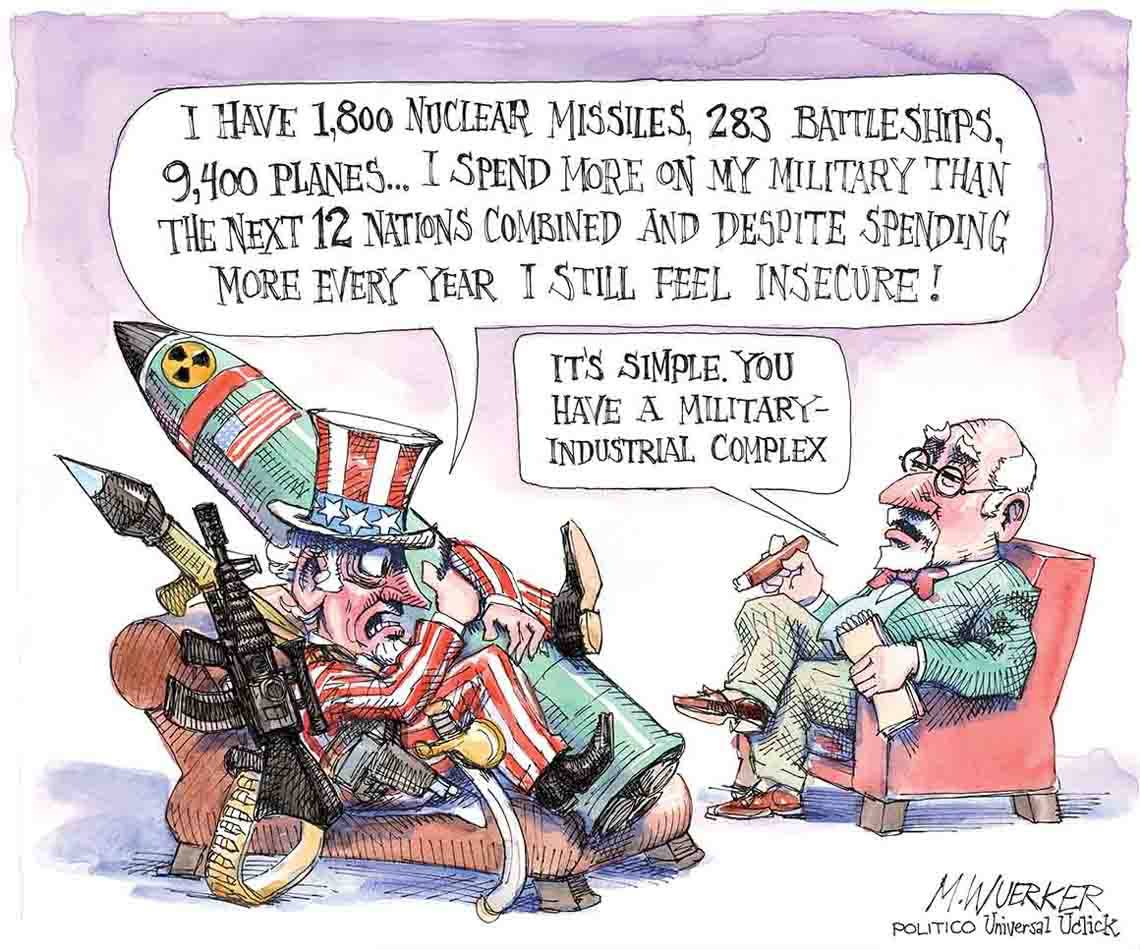 “We are the death merchant of the world”: Ex-Bush official Lawrence Wilkerson condemns military-industrial complex

The military-industrial complex “is much more pernicious than Eisenhower ever thought,” says the retired US colonel

Col. Lawrence Wilkerson is tired of “the corporate interests that we go abroad to slay monsters for.”

As the former chief of staff to Secretary of State Colin Powell, Wilkerson played an important role in the George W. Bush administration. In the years since, however, the former Bush official has established himself as a prominent critic of U.S. foreign policy.

“I think Smedley Butler was onto something,” explained Lawrence Wilkerson, in an extended interview with Salon.

In his day, in the early 20th century, Butler was the highest ranked and most honored official in the history of the U.S. Marine Corps. He helped lead wars throughout the world over a series of decades, before later becoming a vociferous opponent of American imperialism, declaring “war is a racket.”

Wilkerson spoke highly of Butler, referencing the late general’s famous quote: “Looking back on it, I might have given Al Capone a few hints. The best he could do was to operate his racket in three districts. I operated on three continents.”

“I think the problem that Smedley identified, quite eloquently actually,” Wilkerson said, “especially for a Marine — I had to say that as a soldier,” the retired Army colonel added with a laugh; “I think the problem is much deeper and more profound today, and much more subtle and sophisticated.”

Today, the military-industrial complex “is much more pernicious than Eisenhower ever thought it would be,” Wilkerson warned.

In his farewell address in 1961, former President Dwight D. Eisenhower famously cautioned Americans that the military and corporate interests were increasingly working together, contrary to the best interests of the citizenry. He called this phenomenon the military-industrial complex.

As a case study of how the contemporary military-industrial complex works, Wilkerson pointed to leading weapons corporations like Lockheed Martin, and their work with draconian, repressive Western-allied regimes in the Gulf, or in inflaming tensions in Korea.

“Was Bill Clinton’s expansion of NATO — after George H. W. Bush and [his Secretary of State] James Baker had assured Gorbachev and then Yeltsin that we wouldn’t go an inch further east — was this for Lockheed Martin, and Raytheon, and Boeing, and others, to increase their network of potential weapon sales?” Wilkerson asked.

“You bet it was,” he answered.

“Is there a penchant on behalf of the Congress to bless the use of force more often than not because of the constituencies they have and the money they get from the defense contractors?” Wilkerson continued.

Again, he answered his own question: “You bet.”

“It’s not like Dick Cheney or someone like that went and said let’s have a war because we want to make money for Halliburton, but it is a pernicious on decision-making,” the former Bush official explained. “And the fact that they donate so much money to congressional elections and to PACs and so forth is another pernicious influence.”

“Those who deny this are just being utterly naive, or they are complicit too,” Wilkerson added.

“And some of my best friends work for Lockheed Martin,” along with Raytheon, Boeing and Halliburton, he quipped.

Wilkerson — who in the same interview with Salon defended Edward Snowden, saying the whistle-blower performed an important service and did not endanger U.S. national security — was also intensely critical of the growing movement to “privatize public functions, like prisons.”

“I fault us Republicans for this majorly,” he confessed — although a good many prominent Democrats have also jumped on the neoliberal bandwagon. In a 2011 speech, for instance, Secretary of State Hillary Clinton declared, “It’s time for the United States to start thinking of Iraq as a business opportunity” for U.S. corporations.

“In many respects it is now private interests that benefit most from our use of military force,” he continued. “Whether it’s private security contractors, that are still all over Iraq or Afghanistan, or it’s the bigger-known defense contractors, like the number one in the world, Lockheed Martin.”

Journalist Antony Loewenstein detailed how the U.S. privatized its wars in Iraq and Afghanistan in another interview with Salon. There are an estimated 30,000 military contractors working for the Pentagon in Afghanistan today; they outnumber U.S. troops three-to-one. Thousands more are in Iraq.

Lockheed Martin simply “plans to sell every aspect of missile defense that it can,” regardless of whether it is needed, Wilkerson said. And what is best to maximize corporate interest is by no means necessarily the same as what is best for average citizens.

“We dwarf the Russians or anyone else who sells weapons in the world,” the retired Army colonel continued.

“We are the death merchant of the world.”

“Is there a penchant on behalf of the Congress to bless the use of force more often than not because of the constituencies they have and the money they get from the defense contractors?” Wilkerson continued.Again, he answered his own question: “You bet.”

“In many respects it is now private interests that benefit most from our use of military force,”