U.N.: Up to 500 feared dead in Mediterranean shipwreck last week 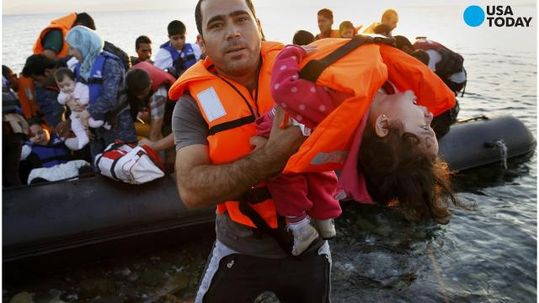 U.N.: Up to 500 feared dead in Mediterranean shipwreck last week

Up to 500 migrants may have drowned when a large boat sank in the Mediterranean Sea, according to the United Nation’s refugee agency, citing witness reports. If confirmed, it would be one of the worst tragedies of Europe’s migrant crisis in the past year.

The 41 survivors — 37 men, three women and a 3-year-old — were rescued by a merchant ship and taken to Kalamata, Greece on April 16. Those rescued include 23 Somalis, 11 Ethiopians, six Egyptians and a Sudanese, the U.N. said.

The survivors told agency staff they were part of a group of 100 to 200 people who left on a 90-foot boat from a place near Tobruk.

The survivors include people who had not yet boarded the larger vessel, as well as some who managed to swim back to the smaller boat. They drifted at sea possibly for three days before being spotted and rescued.

The refugee agency visited the survivors at a stadium in Kalamata, where they have been housed by local authorities “while they undergo police procedures,” according to the U.N. report.

Barbara Molinario, a Rome-based spokeswoman for the U.N.’s refugee agency, told the Associated Press that details remained unclear, and staffers didn’t want to press the survivors too hard “as they are still very tried by their experience.”

The statements offered the most official comment yet following repeated news reports about the incident in recent days.

Somalia’s president, prime minister and speaker of parliament issued a condolence statement to the nation April 16, after unconfirmed report circulated among families and on social media that some 400 Somalis had drowned at sea, the AP reported.

“It’s a painful tragedy which reminds us all how important it is for us to discourage our youth from embarking on such high risk journeys,” the leaders’ statement said.

So far this year, 179,552 migrants arrived in Europe via the Mediterranean from North Africa and Turkey, a number that dwarfs the 23,425 migrants who arrived during the same period in 2015, according to the U.N.’s refugee agency.

More than 1 million migrants traveled to Europe by sea last year. Most were refugees from war in Afghanistan, Iraq and Syria fleeing to Greece, and the European Union, via Turkey. However, the longer Libya-Italy route has traditionally seen more deaths.

Facing internal divisions, the EU has struggled to cope with the influx, and the refugee agency on Wednesday reiterated its longstanding call for more “regular pathways” to Europe such as with resettlement and humanitarian admission programs, family reunification, private sponsorship and student and work visas.