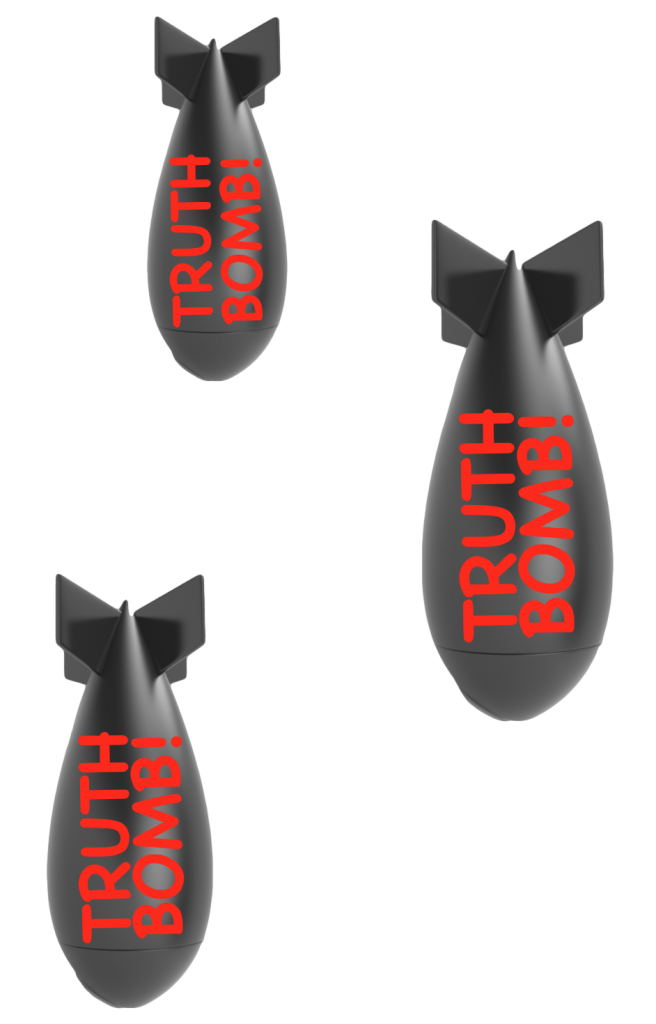 I coined the phrase “Truth Bomb” well over a year ago to much skepticism it would or even could ever happen.  As you may know by now, information was dropped in “truth bomb” fashion regarding the clientele of a Panamanian law firm, Mossack Fonseca http://www.yahoo.com/news/panama-papers-secret-accounts-rich-powerful-043044966.html. This information dump was collated by 100 international journalists.

When I first heard the news I thought “here it is, THE TRUTH BOMB”!  After about 30 minutes or so and reading “who” was being exposed, I began to scratch my head.  Noticeably absent from being named were any prominent Americans or Europeans with exception of David Cameron’s father and several Members of British Parliament.  Then it dawned on me, this was sort of a “reverse truth bomb” where Putin, Xi and others were being discredited.

As you know, it has been my contention we would see a massive truth bomb dropped by Putin and the East ON the various Western “dirties”.  You name it, bribes and hidden accounts of business leaders, Senators, Representatives, Governors, Ambassadors (past presidents?)…I believed we would see information regarding false flags including 911, election fraud and even empty vaults being exposed …  Instead, the “truth bomb” though very probably true was only detrimental to non Western interests.  Did I have it backwards?

I believe what we have just seen was only an opening volley by the West to try to discredit what they KNOW is coming from the East!  In fact, it could turn out to be a free for all amongst the elites where the “sharks eat the sharks” by outing each other.  I have said for years we live in a world of true lies covered by holograms of the rule of law, we may very well soon see this.  The elites now look like they will begin outing each other in an effort to say “what I did wasn’t so bad, just look at what so and so did”!

In reality this will be very good for the average Joe in the long run.  Notice I said “the long run” because the immediate aftermath of “truth” coming out means we will learn that “everything is worth nothing” or at least a small fraction of what we are being told.  “Trust” will completely break down and with it “markets”.  Stock and bond markets, cross trading and derivatives, institutions of all sorts will fail, and most importantly the global fiat currency markets themselves.  The aftermath may even approach Mad Max proportions but “truth” will be good in the long run …especially if the elites outing each other leads to lynching’s and unrest not seen since the French Revolution!  Truth now, though painful will lead to a washing away of the current system(s).  In the words of Chinese President Xi, “painful in the short term but very good for the long term”.

I do need to make mention the “timing” of what is happening.  Global trade and GDP is collapsing.  Markets have been held up via derivatives while remaining unencumbered collateral is almost nonexistent.  Lowering interest rates and flooding the system with new speedballs is no longer working.  Put simply, we are hitting a wall in the global Ponzi scheme!  In about two weeks the Chinese will open for full trading in a cash only metals exchange.  Western inventories of less than $1 billion of gold and silver will not be able to withstand any arbitrage action which will be sure to follow.  Please note, China will say “we didn’t do it, the free market did”…

Let’s ponder a question or two to wrap this up.  What would have been market reactions today were the “truth bombs” dropped on the West instead of the East?  What if we were given hard evidence that dozens of Congressmen took bribes (disguised as campaign contributions) in the $ billions and their “votes” were bought?  What if we got information of blackmail on Supreme court justices …or gold balances held individually by past and present central bankers?  What if proof of regularly rigged elections were to surface?  What if absolute proof that pointed to Israeli/Saudi/U.S. involvement in the planning and implementation of 911 were to come out?  What would be the reaction if scores of dirty dealing, fraud, tax evasion or even “eliminations” were performed by past presidents?  Not to leave Europe out of this party, what if similar information was dropped on them some sunny Sunday afternoon?

I ask these questions because when the return volley of “TRUTH BOMBS” comes, it will not be pleasant!  Much of what we have come to believe as our “way of life” in the West will not only come into question, it will be GONE IN AN INSTANT!  Pooh pooh this at your own risk because it is coming as sure as the Sun will rise tomorrow morning.  We have lived in a dream world for well over a decade, the truth will be outed and the truth happens to be some very ugly stuff.  Our markets, our economy, OUR WAY OF LIFE will be permanently altered faster than you can ask “what just happened”.  We will go to bed on a Friday night in one world and wake up one Monday morning in another entirely different world!  If you want to short something …short country clubs! This is such an important topic it was decided we should put it out publicly.  If you liked (how could anyone “like” such news?) the content, my writings and interviews with Jim Sinclair, we can be found at www.jsmineset.com.  Please join us and subscribe to our gold subscribe content, Click here to sign up now!