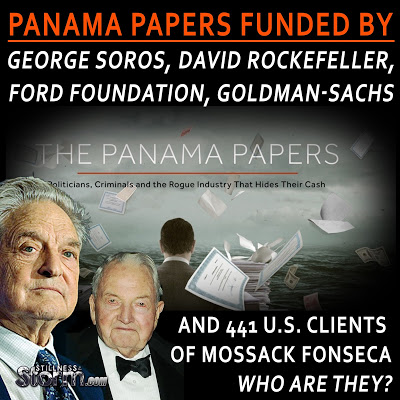 Earlier today, for the first time we got a glimpse into some of the American names allegedly contained in the “Panama Papers”, largest ever leak. “Some”, not all, and “allegedly” because as we said yesterday, “one can’t help but wonder: why not do a Wikileaks type data dump, one which reveals if not all the 2.6 terabytes of data due to security concerns, then at least the identities of these 441 US-based clients. After all, with the rest of the world has already been extensively shamed, it’s only fair to open US books as well.”

The exact same question appeared in an interview conducted between Wired magazine and the director of the organization that released the Panama Papers, the International Consortium of Investigative Journalists, or ICIJ, Gerard Ryle.

This is what Ryle said:

Ryle says that the media organizations have no plans to release the full dataset, WikiLeaks-style, which he argues would expose the sensitive information of innocent private individuals along with the public figures on which the group’s reporting has focused. “We’re not WikiLeaks. We’re trying to show that journalism can be done responsibly,” Ryle says. He says he advised the reporters from all the participating media outlets to “go crazy, but tell us what’s in the public interest for your country.”

Question aside about who it is that gets to decide which “innocent private individuals” are to be left alone, Wikileaks clearly did not like being characterized as conducting “irresponsible” journalism – and to the contrary, many in the public arena have called for another massive, distributed effort to get to the bottom of a 2.4TB treasure trove of data which a handful of journalists will simply be unable to dig through – and moments ago, on Twitter, accused the ICIJ of being a “Washington DC based Ford, Soros funded soft-power tax-dodge” which “has a WikiLeaks problem.”

Moments later, in a subsequent tweet it added that the “Putin attack was produced by OCCRP which targets Russia & former USSR and was funded by USAID & Soros.”

#PanamaPapers Putin attack was produced by OCCRP which targets Russia & former USSR and was funded by USAID & Soros. pic.twitter.com/tgeKfLuROn

Should we release all 11 million #PanamaPapers so everyone can search through them like our other publications?

And so, a new contest is born: one between the “old” source of mega leaks, and the new one. We wonder if and when Edward Snowden and/or Glenn Greenwald will also chime in.

But we are far more interested if now, that there appears to be a war brewing between Wikileaks and ICIJ, who what “information” will be released next, and whether whatever comes out will put the entire Panama Papers project in a different perspective, one which, as even Bloomberg has hinted, may have been to benefit the last remaining global tax haven around, the United States itself, as well as the most notorious provider of “tax haven” services in in said country: Rothschild.