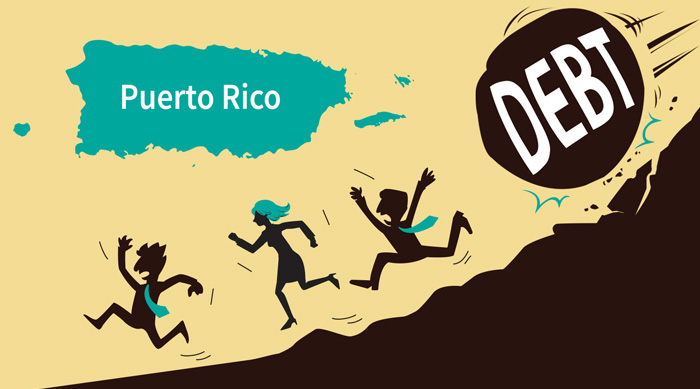 In a devastating blow to its megabank creditors, Puerto Rico’s Legislature approved a bill on Wednesday that suspended the US territory’s debt payments until at least January 2017.

Since 2000, Wall Street has conned the Puerto Rican government into a massive black hole of debt. After Puerto Rico handed them control of their federal bond sales, Wall Street executives tacked on hundreds of millions in fees for their “services,” greasing the skids for the island’s financial dismay.

Along with suspending debt payments, the legislation suspended payment on all general obligation bonds which happen to be guaranteed by the island’s constitution. As Bloomberg previously reported:

Unlike the bonds of most states and municipalities, Puerto Rico’s are exempt from local, state and federal taxes everywhere in the U.S. As a result, they are held by about half of open-end muni funds. The competitive advantage made it easy for Puerto Rico to double its debt in 10 years by selling bonds to plug annual budget deficits and pay for operating expenses — the same combination that brought New York City to the brink of bankruptcy in the 1970s.

As a result of the predatory lending tactics of Wall Street, coupled with the irresponsible nature of the state, Puerto Rico’s national bank is now prepped for receivership if necessary, according to the measure.

The Federal Reserve of New York has a long-standing relationship with Puerto Rico which has undoubtedly led to the territory’s fiscal woes. In 2014, the Fed issued a warning to the Puerto Rican government telling them to grow the economy (i.e. take on more Fed debt) or watch their economy crumble. According to the Federal Reserve’s report:

The Island appears to face two alternatives: either manage its own economic adjustment and put the Commonwealth on a secure fiscal basis, or wait for outmigration and the discipline of the market to force an even more painful adjustment, particularly for those unable or unwilling to leave the Island. Thus, the demanding choices Puerto Rico makes today will affect its long-run economic prospects and the future livelihood of its residents. A better future for Puerto Rico requires decisive leadership today.

It seems that refusing to take on more debt has created a terminal condition for Puerto Rico’s economy as the GDP remains stagnant, interest rates on their debt skyrocket, and citizens are fleeing the island at record rates.

As the Legislature met to discuss restructuring a $5 billion portion of the island’s debt, the Government Development Bank balked at the deal, noting that Wall Street has gotten them to where they are today.

“It is exactly the type of ‘Wall Street’ solution that led us to the precipice we are now looking over,” they said.

According to the Pew Research Center, 84,000 people left for the mainland U.S. last year. The unpayable mountain of debt and the resultant chaos in Puerto Rico is but the canary in the coal mine for the fiscal situation soon to be faced by other states who have long practiced the same heavily irresponsible borrowing practices.

In the short time that it will take most people to read this article, the US national debt will increase by $3,000,000. As it stands currently, the United States national debt is approaching $20,000,000,000,000 — a number now symbolic of the mathematical certainty that is the West’s financial collapse.