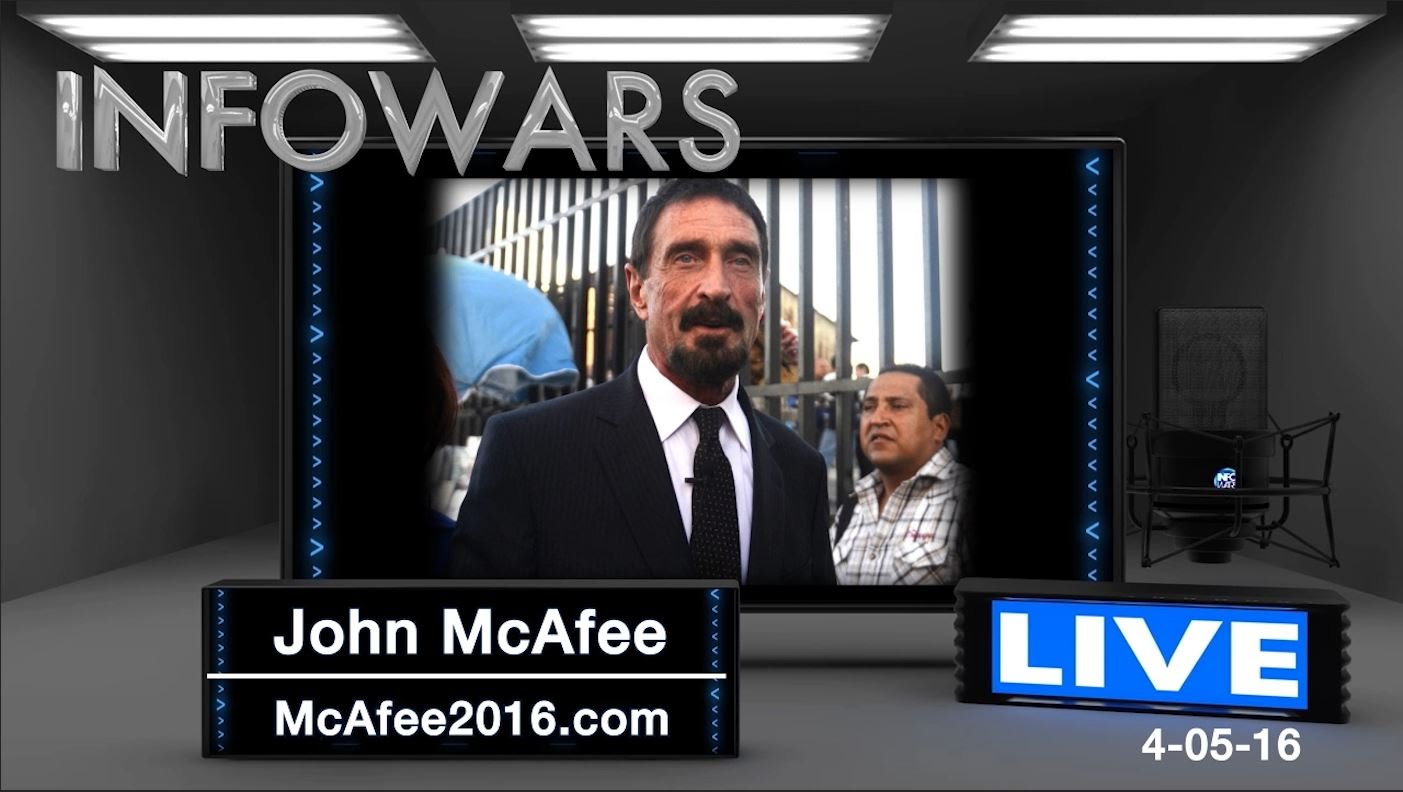 Today, as you’ll learn in the video below by Alex Jones along with the article from Infowars, John McAfee reported in Business Insider that “A time bomb is hidden beneath the Panama Papers,” and he goes into detail about what that bomb is. If you recall, in a post yesterday titled What are the Mysterious Panama Papers? Who Was Left Out And Why,  it explained how the offshore holding tax shelters of the Mossack Fonseca law firm function, and revealed some of the players. The ticking time bomb at the heart of this hoax, is the agenda of the New World Order, and the Panama Papers are intended to bend Vladimir Putin’s will in line with where global elites want it.

What we’ve learned today, is that the group responsible for the leak is none other than George Soros’ Open Society Foundation (a George Soros outfit), the Ford Foundation, and a host of other foundations. Said another way: The Panama Papers wasn’t a “leak.” It was yet ANOTHER “orchestrated” attack by Illuminati front man George Soros intended to attack Vladimir Putin. Why? Because Putin isn’t playing by Illuminati banking rules, and the global elites aren’t having it.

If you’ve been paying attention to geopolitics for any length of time, then you know who George Soros is, and you know what he’s capable of. He’s a billionaire several times over, and operates as a front man for the Bilderberg/Illuminati/New World Order. Recently, the filthy fingerprints of both the global elites and Soros have been all over just about every major crisis currently unfolding around the globe. Watch as I lay out their roadmap of destruction…

Something rarely talked about except among “crazy conspiracy theorists” but nonetheless true, is that virtually every Central Bank on Earth (including the our own Fed) is owned by the Illuminati Rothschild family. For a complete list of banks owned by the Illuminati Rothschild Family, see the list here. Putin and the Chinese have refused to buy in to the Rothschild banking scheme, which is likely why Putin has been targeted in this recent charade. Learn more in the video from Alex Jones below:

Global elites and the Rothschild banking Cartel have had a plan in place for some time to eliminate the use of cash entirely, and transition the world into a cashless society using Ingestible RFID Chips. It’s no coincidence that Ingestible RFID Chips were the focal point at last year’s Bilderberg 2015 meeting. Unbeknownst to many, not only have the chips been designed by none other than Google, but they’ve also already been approved for human use by the FDA. Sooner or later, prepare to be chipped.

When Muslim refugees first starting fleeing into Europe, It was known back in September that a massive influx of Muslim refugees into Europe could potentially cause so much chaos, the possible collapse of the Eurozone was openly discussed at length. The fact that so many Muslim “refugees” were coming from non war-torn areas raised the question: Was there another motive for the massive sudden migration. Some suggested the eventual need for tracking of the refugees would eventually be  precisely the excuse the global elites plan to use to begin forcing Universal Biometric RFID Implants.

At first, that was dismissed as mere “conspiracy nonsense,” but then in November, Former FBI Assistant Director James Kallstrom went on The Kelly File on Fox News and made the claim that in his professional opinion, the refugee “crisis” unfolding in Europe appeared to be an “orchestrated event.” Naturally, the mainstream media went crazy, because “orchestrated” implies “conspiracy theorists,” and the mainstream media teaches us “those kind of people” are crazy. It wasn’t but a day or so later, George Soros emailed a letter to Bloomberg Business stating that the reason the refugee “crisis” appeared to be orchestrated, is because it was, and he was taking credit for helping to fund it.

Soros’ reason: To facilitate the elimination of national boarders.

Why? Because that paves the way for One World Government… those words no one wants to hear.

Proceeding according to schedule, in January, many of you may recall that Emperor Obama and the UN declare themselves above the U.S. Constitution through initiatives like Agenda 21 and Agenda 2030, both of which hand over US sovereignty to a global government. Both also pave the way for the new cashless banking system the global elite are working toward.As recently as February, more information came out suggesting that the Bilderberg Group was funding the entire refugee “Crisis” to force UN Agenda 2030 which usurps the US Constitution.

FOR AN ACTUAL PDF OF AGENDA 21 FROM THE U.N.: CLICK HERE

People don’t want to hear about a “New World Order,” because the thought is too scary, but the reality is it’s very real, and they have plans for you whether you believe in them or not. Putin has repeatedly refused to play ball, and you see what they are doing to him. As the video below details, Putin has been fighting the Rothschild Banking Cartel virtually alone for some time…

While Europe is descending into chaos, at the same time here domestically, Soros’ new group “Democracy Spring” has threatened to create the largest civil uprising in US history if Donald Trump gets the GOP nomination. Then, Soros’ long time pal Barack Obama can declare Martial Law suspending the elections… moving even closer to the goal of the global elite.

As for what the media is reporting… as Russian TV reported yesterday (below), the world’s media has been pointing at one person following a massive documents leak from a Panama law firm. But that person, President Vladimir Putin, wasn’t even mentioned in the data leak. Former British ambassador and human rights activist Craig Murray joins RT to discuss this issue.

“ICIJ [International Consortium of Investigative Journalists] and an international coalition of media outlets investigated the trove of papers, which allegedly reveal a clandestine network involving associates of Russian President Vladimir Putin, and business ties between a member of FIFA’s [Fédération Internationale de Football Association] ethics committee andmen whom the United States has indicted for corruption,” CNN reports this morning.

Putin is headlined in the emerging scandal, although he is not directly connected to the scheme to move billions of dollars into offshore tax havens. 12 current or former world leaders and 128 other politicians and public officials are directly implicated, but they play second fiddle to Putin in corporate media news stories.

The establishment has not bothered to investigate the International Consortium of Investigative Journalists (ICIJ), the organization behind the leak.

A trip to its web page reveals its support and funding sources: the Open Society Foundations (a George Soros outfit), the Ford Foundation and a host of other foundations. Soros’ anti-Russian obsession is well-known. Less well-known is the fact the Ford Foundation is connected to the CIA and has specialized in international cultural propaganda since the end of the Second World War.

Craig Murray points out that ICIJ is funded and organized by the Center for Public Integrity (CPI), a liberal “watchdog” group famous for portraying Patrick J. Buchanan as a white supremacy supporter during the 1996 presidential race. Murray notes CPI is funded by a raft of globalist interests, including the Ford Foundation, the Carnegie Endowment, the Rockefeller Family Fund and the Open Society Foundation.

“The corporate media—the Guardian and BBC in the UK—have exclusive access to the database which you and I cannot see. They are protecting themselves from even seeing western corporations’ sensitive information by only looking at those documents which are brought up by specific searches such as UN sanctions busters. Never forget the Guardian smashed its copies of the Snowden files on the instruction of MI6,” writes Murray.

ICIJ and CPI are attempting to hijack investigative journalism and trade on the notoriety of Edward Snowden and WikiLeaks to take down Putin and Bashar al-Assad, the embattled leader of Syria.

The Panama Papers expose offshore tax havens in Switzerland, the Bahamas, Grand Cayman, and Panama, but says nothing about a new arrangement legalized under FATCA, the Foreign Account Tax Compliance Act.

The law “makes the parking of dirty US money abroad practically impossible. So where does that money go instead—it stays in the US,” writes Zero Hedge. “And, to top it off, there is one specific firm which is spearheading the conversion of the U.S. into Panama: Rothschild.”

The international bankster institution opened a trust company in Reno, Nevada. “It is now moving the fortunes of wealthy foreign clients out of offshore havens such as Bermuda, subject to the new international disclosure requirements, and into Rothschild-run trusts in Nevada, which are exempt,” Bloomberg reports. The United States “is effectively the biggest tax haven in the world,” boasted Andrew Penny of Rothschild. One of the world’s largest providers of offshore accounts, Trident Trust, opened an office in Sioux Falls, South Dakota.

The financial elite will gladly sacrifice Sigmundur David Gunnlaugsson, the prime minister of Iceland, and even the family of David Cameron, to get at Vladimir Putin.