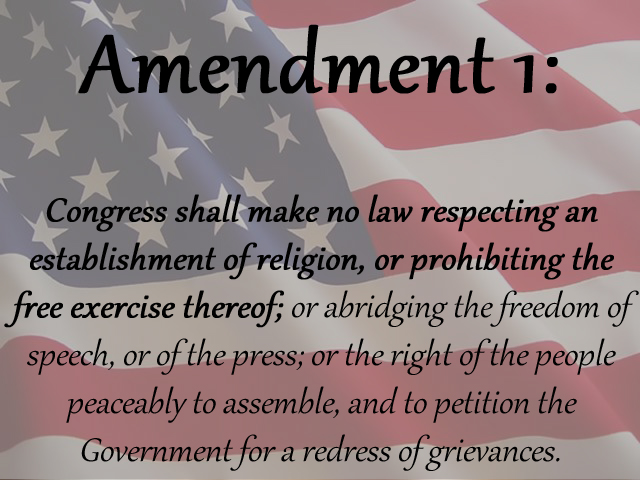 met for a hearing, one of the Israel lobby’s most dependable members of Congress, Rep. Ileana Ros-Lehtinen huddled with twenty supporters of AIPAC, the lobby’s front line organization in Washington. It was a routine affair for the Florida Republican and her pro-Israel allies, whom she addressed by their first names. But a member of the public who witnessed the meeting noticed a startling new agenda was on the table.

The witness told me that Ros-Lehtinen vowed to destroy the mounting grassroots BDS campaign to boycott, divest from and sanction Israel. To do so, she pledged to weaken the First Amendment. “Free speech is being used in our country to denigrate Israel and we need to actively fight against that,” Ros-Lehtinen declared, according to the source.

Disturbing as her statement might have been, it was consistent with the rhetoric bellowed out by nearly every presidential contender who appeared on stage at DC’s Verizon Center. Speaking before some 18,000 AIPAC supporters, Senator Ted Cruz not only pledged to starve educational institutions of federal funding if they dared to support BDS, he promised that under his watch, “they will be prosecuted to the fullest extent of the law.” Echoing Cruz, Republican contender John Kasich announced his intention to “use the full force of the White House” to destroy what he called “the scourge” of BDS.

The Democratic frontrunner, Hillary Clinton, was no less draconian. Reverting to the “Goldwater girl” sensibility of her conservative college years, and tossing aside her recent appeals to social justice intersectionality, Clinton vowed to punish the campus left for supporting Palestinian human rights. Slamming BDS as a form of anti-Semitic hate speech, Clinton offered encouragement to the young, affluent and almost uniformly white pro-Israel students bused into AIPAC in droves. “Don’t let anyone silence you, bully you or try to shut down debate, especially in places of learning like colleges and universities,” she implored them.

The BDS movement has gathered momentum at a staggering pace since it was devised by Palestinian civil society groups in 2005. With its call for grassroots level boycotts to pressure Israel into respecting the human rights of Palestinians, the movement has spread across European capitals and found fertile soil on American college campuses. Yet just a few years ago, AIPAC and its affiliates displayed little interest at all in it. When he appeared at AIPAC in 2011, Israeli Prime Minister Benjamin Netanyahu spent his entire speech badgering the Obama administration for not attacking Iran. He did not feel compelled to mention Palestinians even once. Despite the influential role played in the 2012 Republican presidential primary by Sheldon Adelson, a key benefactor of Netanyahu and the Republican presidential nominee Mitt Romney, BDS was scarcely mentioned by any of the candidates, nor was it discussed much in mainstream American media.

Almost four years later, with the Iran nuclear deal ratified, the peace process in shambles and the Green Line that was supposed to separate Israel from a future Palestinian state fully erased by a settlement movement that dominates the Israeli government, AIPAC is moving to destroy the last line of resistance. From Washington to Paris to London, Israel lobbyists are extracting ritual denunciations of BDS from its political hand puppets and authoring new laws to forbid its implementation. Repressive legislative efforts are accompanied bylegal subterfuge, high-tech sabotage, McCarthy-style online blacklists and carefully orchestrated smear campaigns against anyone who resists. No target is too small. With guidance from Jerusalem, where the most right-wing government in Israeli history is mounting an all-out assault on internal dissent, the lobby has embraced a totalitarian agenda that aims for nothing less than the criminalization of all political opposition.

On display for the first time at AIPAC, the Israel lobby’s search-and-destroy mission against BDS has already found enthusiastic allies in governments across the West. In Paris, where Prime Minister Manuel Valls vehemently equated anti-Zionism with anti-Semitism, a French court of criminal appeals recently upheld the conviction of a dozen Palestine solidarity activists for calling for the boycott of Israeli goods. In the UK, the Conservative government of Prime Minister David Cameron has introduced legislation to prevent local town councils from divesting from Israeli products or even from weapons manufacturers. As state legislatures across the US vote to blacklist companies that refuse to do business in Israel — a rare and highly unusual instance of corporate regulation — the University of California board of regents has taken the unprecedented step ofdefining anti-Zionism as anti-Jewish discrimination, setting the stage for outlawing a political position gaining in popularity among Jewish Americans.

In its bid to criminalize the speech of its opponents, the Israel lobby has sought to formally redefine anti-Semitism according to the “3 D’s” formula conceived by Natan Sharansky. Promoted as a former Soviet dissident who champions freedom, Sharansky is, in fact, a hardline Likudnik Israeli politician and promoter of Israel’s settlement enterprise who helped inspire George W. Bush’s Middle Eastern conquests. Sharansky’s “3 D’s” abandons the traditional understanding of anti-Semitism, redefining it from the discrimination against Jews as Jews to any opposition to the political imperatives of the Israeli government, thereby limiting Jewish identity to the narrow ideological designs of Zionism. Israel lobbyists have successfully pressured the US State Department to adopt Sharansky’s definition, and after a long slog, have pushed the University of California regents to endorse it as well. If this highly politicized understanding of anti-Semitism is ever enforced, anyone who has campaigned against Israeli human rights abuses could face harsh legal recriminations, even if they identify as Jewish.

Capitalizing on a campaign finance system deregulated by the Citizens United decision, which defined corporations as people with unlimited rights to free speech, the Israel lobby has unprecedented leeway to limit the speech of actual human beings. Leveraging massive donations from Likudnik oligarchs, it is planting cadres at every level of government, turning Congress, statehouses and student government councils into a unified platform for crushing resistance. As the veteran AIPAC operative Jonathan Kessler declared, “We’re going to make sure that pro-Israel students take over the student government and reverse [divestment votes]. This is how AIPAC operates in our nation’s capital.”

The lobby’s campaign extends well beyond crushing Palestine solidarity. In the years ahead, pro-Israel forces will serve as the leading edge of reactionary campaigns to fracture any iteration of solidarity between marginalized social groups. The smears of Jeremy Corbyn, the leader of the British Labour Party, offer a perfect example of how Israel has been instrumentalized to break down progressive social movements. Elected in one of the most dramatic grassroots triumphs in recent political history by a coalition of university students, blue collar workers and immigrants outraged by deepening austerity and destructive foreign interventions, Corbyn has come under sustained fire from the neoliberal Blairites who had dominated Labour since the 1990’s. This February, anti-Corbyn elements opened up a new front with a torrent of thinly sourced allegations that Labour had suddenly become infected with “an anti-Semitism problem.” Centered around the resignation of a Blairite Oxford University Labour club leader who complained that Jew-haters disguised as human rights activists had made his life unbearable, the unconfirmed claims made their way to the New York Times op-ed page through a column by Roger Cohen entitled, “An Anti-Semitism of the Left.”

Cobbling together a litany of complaints by anxiety-ridden Zionists about the tide of Palestine activism rising all around them, Cohen bemoaned the “identity and liberation politics” that now prevail on university campuses. Just a few paragraphs later, however, Cohen pronounced his devotion to the Zionist project, insisting that “the Jewish state was needed… That is why I am a Zionist — now a dirty word in Europe.” Yet Cohen does not live in Israel; he resides instead in an affluent locale in New York City, where Jews enjoy lavish lifestyles, political power and a sense of security they could never dream of in Jerusalem. His connection to Zionism is not grounded in the facts on the ground in Israel-Palestine, but in an identity politics that only elites like him can enjoy. When forms of speech that reinforce his identity have come under attack, as when Islamic fanatics massacred the staff of Charlie Hebdo, he summoned “the entire free world” to “ruthlessly” defend liberal values. When his identity has been challenged by the unrelenting demands of Israel’s colonial subjects, however, Cohen quickly abandoned all pretense to enlightenment. He has become the living embodiment of Phil Ochs’ sardonic classic, “Love Me I’m A Liberal”: “Ten degrees to the left of center in good times, ten degrees to the right of center if it affects them personally,” as Ochs sang.

While Israel lobbyists howl about the threat of intersectionality on campus, they are actively appropriating its identitarian language to undermine progressive social justice organizing on campus. Mark Yudof, the former University of California president who tacitly endorsed the criminal prosecution of Muslim-American students for protesting a speech by Israel’s former ambassador to the US, put the tactic on display by describing factual claims that Israeli soldiers deliberately kill civilians as a “microaggression against Jews.” At the University of Michigan, a member of the student governing council justified her vote against a resolution to divest from corporations involved in the Israeli occupation on the grounds that it denied “safe spaces” to Jewish students. And at the University of South California, a pro-Israel student conceded that the UC regents’ decision to classify anti-Zionism as a form of anti-Semitism was an attack on free speech — but supported it anyway because, in her view, Jews are “a minority still so unfairly discriminated against and maligned.” Animated by the perceived ethnic slights of a hyper-privileged overclass, pro-Israel activism is essentially a White Lives Matter movement protected from accountability by morally inconsistent liberals. Indeed, many of the Jewish liberals who claim to have battled South African apartheid and marched alongside the civil rights movement now seek todestroy a struggle they inspired.

Toward the end of his life, as he watched the occupation of Palestine deepen and expand, the dissident Israeli philosopher Yeshayahu Leibowitz described Israel as “the only totalitarian country in the enlightened world.” He was referring to the way the Jewish state promoted itself as a beacon of liberal democracy while imposing a brutal, panopticon-style regime of repression on Palestinians, raiding their homes at night, shuttering their media outlets and torturing them at will. Today, Israel is projecting this regime outward, recruiting operatives across the West to eradicate all resistance, even attacking constitutionally protected forms of protest. Like the country it has enlisted to defend, a borderless settler-colony that demands special exemption from international law, the lobby’s mission knows no limits. Where the occupation started is well known, but where will it end?