Debt Is Slavery: IMF Actions Should Be Considered Crimes Against Humanity 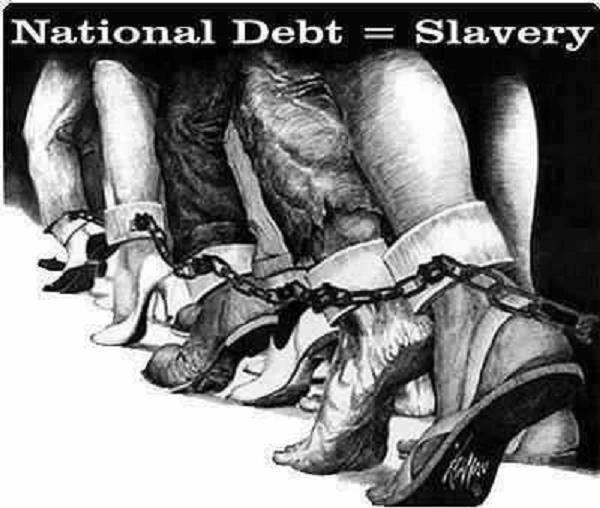 Debt Is Slavery: IMF Actions Should Be Considered Crimes Against Humanity – by Jeff Fitchett

The International Monetary Fund has discussed a “crisis event” to force Athens to follow the IMF’s dictates.  The IMF is also threatening to leave the troika of creditors if Germany refuses to authorize debt relief for Greece.  The reason Greece was accepted into the European Union is because Goldman Sachs helped the Government of Greece conceal the true amount of their sovereign debt. This allowed Greece to meet the fiscal requirements to enter the union.  There is a constant theme in global politics and high finance: Goldman Sachs and the other “too big to fail banks.”  A monetary union is designed to fail.  Each country has unique circumstances.  I liken countries to individual people.  Each person has their own spending patterns, requirements, desires and way of life.  A currency should reflect an individual nation, not a group of countries that are different from one another.  To go deeper, currency is based on confidence.  It’s the belief that the digital entry you see in your bank account or physical paper money is actually worth something.  Money is a hard asset.  Currency is a manipulated con.   If one country has a large debt load, high budget deficit, social benefits that are extremely generous and limited tax revenue the value of the currency will be lower than a country that balances their budget, is paying down their debt and has sustainable social benefits.  The fact is, most countries are in bad financial shape, but certain countries are in worse shape.

Greece was destined to fail from the very beginning.  If they had their own currency, such as the former Drachma, the value of it would be substantially less than the Euro, US dollar, Japanese Yen and the Chinese Yuan.  Greece is getting hit with a double whammy; an economic catastrophe from being stuck in the European Union and from the ongoing decline of the world economy.  Greece’s debt load would never have reached these levels had they not been in the European Union.  Interest rates on European sovereign debt is now near zero percent.  In the years leading up to the financial crisis in 2008, Greece was able to borrow money at the same interest rate as Germany.  One corrupt Greek government after another piled on debt at interest rate levels that were so low they did not reflect any risk of defaulting on repayment.  Fast forward to today and we all know that Greece will never be able to pay off their debt and they require constant bail-outs to keep their society afloat.

The actions of the International Monetary Fund should be considered crimes against humanity.  How can an organization that is supposed to be quasi government controlled be able to force a nation to privatize public utilities, such as water systems, to large multi-national corporations who in turn jack up the price of water. The loans should never have been offered in the first place.  The reason the loans were given is because it is lucrative for lenders.  Not only do they collect interest on debt in perpetuity, but they also get to take possession of sovereign assets, such as ports, water utilities, electricity generators, national treasures and so on, when the said country defaults.  Christine Lagarde, the managing director of the IMF, explained in an interview that; “When the world around the IMF goes downhill, we thrive. We become extremely active because we lend money, we earn interest and charges and all the rest of it, and the institution does well. When the world goes well and we’ve had years of growth, as was the case back in 2006 and 2007, the IMF doesn’t do so well both financially and otherwise.” In the end, banks always end up collecting the income tax of a country to cover the principal and interest of the debt that the nation borrowed.

The craziest aspect of all of this is that fiat currency is leant into existence. Fractional reserve banking allows for banks to create currency out of thin air.  It is criminal.  How can a bank lend money, that has never existed before, and then take possession of state assets when a country is unable to pay back the loan they signed on for?  The IMF, World Bank and most commercial banks are all in on the con.  Once upon a time, savers would deposit their funds in a bank and the bank would in turn lend out bank depositor money to individuals and businesses.  The bank acted as a middle man for transactions between savers and borrowers.  The bank was paid a respectable fee for providing the services.  As long as there was liquidity everything ran smoothly.  If a bank lent more than was on deposit; there was the potential for a bank run.  All throughout history there have been bank runs because of the greedy nature of individuals.

Today, the too big to fail banks are able to pay fines for committing fraud, but no actual person is ever punished.  Government officials and bank executives and large shareholders are colluding at the detriment of society.  We are now facing the hangover of the greatest debt binge in human history.  Debt allows for future growth to occur in the present. We are now feeling the effects of deflation.  Incomes are dropping all the while debt grows larger.  Around 98% of all US government debt that has been issued over the past number of years is purchased by the US Federal Reserve.  The Federal Reserve is creating currency units, out of nothing, and buying US government debt.  The same goes for most countries in the world today.  It is a big fraud.

It is obvious that debt equates to slavery.  If you have any debt; you should make it your purpose to get out of debt as soon as possible.  Plan for a future that involves your personal income dropping drastically and the value of major assets such as a house dropping in  value. This deflationary period will last quite some time, but there is a strong likelihood that governments and central banks will launch massive money printing programs. The printing of money will be used to keep the illusion that our world economy is still growing, that debt levels are sustainable and that governments are still fiscally viable.  Serious inflation or hyperinflation will likely be the result of the money printing.   Only time will tell as to how it all plays out.  Gold and silver bullion will be beneficial for savers to have given that currencies are being debased and the financial system is looking more and more unstable.