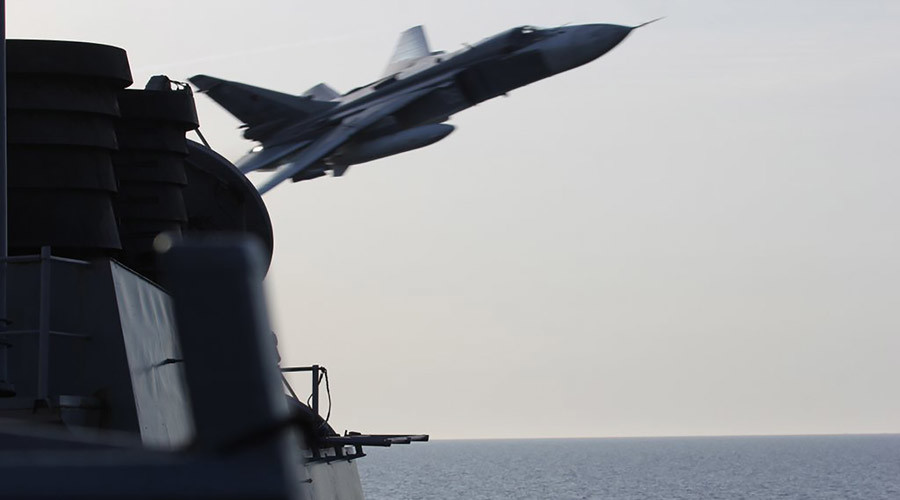 The aerobatics skills of Russian pilots over the US destroyer Donald Cook in the Baltic Sea left the Pentagon and other US official running for cover in Washington over “aggressive close interactions” with Russian fighter jets.

Releasing the footage of Russian jet flybys in the vicinity of the destroyer, the US Navy said that its vessel has encountered multiple “aggressive flight maneuvers …within close proximity of the ship,” some as close as 30 feet (10 meters) on Monday and Tuesday.

The set of incidents took place as the US ship, which had sailed from the Polish port of Gdynia, was conducting exercises with its NATO ally Poland in the Baltic Sea. The Navy announced that the SU-24 first flew over Donald Cook on Monday as US sailors were rehearsing “deck landing drills with an allied [Polish] military helicopter”. The numerous close-range, low altitude encounters were witnessed at 3:00pm local time, forcing the commander of the ship to suspend helicopter refueling on the deck until the Russian jets departed the area.

The Donald Cook happened to be around 70km away from a Russian naval base when the Su-24 planes passed by, according to the Russian Defense Ministry spokesman Major General Igor Konashenkov.

“On April 13, the pilots of the Russian Air Force Su-24 planes took part in a training exercise over international waters in the Baltic Sea. Their route took them to an area where the USS Donald Cook was present, around 70km from a Russian naval base,” he said, as cited by TASS.

Konashenkov added that all flights undertaken by the Russian Air Force strictly follow all international rules when traveling over neutral waters.

“Having located the ship in a zone of visual sight, the Russian pilots undertook a maneuver that was in accordance with all the necessary safety rules,” he said, while they Russian Defense Ministry questioned why the Americans were making such a big deal about the incident.

The next day, the Navy said, Russia caused concern among US sailors when a Russian KA-27 Helix helicopter flew seven times over the ship at low altitude in international waters at around 5:00pm. Some 40 minutes later, two Russian SU-24 jets allegedly made a further 11 “close-range and low altitude passes”.

“The Russian aircraft flew in a simulated attack profile and failed to respond to repeated safety advisories in both English and Russian. USS Donald Cook’s commanding officer deemed several of these maneuvers as unsafe and unprofessional,” the Navy said.

Judging by the videos released by the US Navy, the sailors were nonplussed by the Russian aerobatic skills. They gathered on the top deck of the destroyer to watch the Russian pilots.

“He is on the deck below the bridge lane…It looks like he’ll be coming in across the flight deck, coming in low, bridge wing level…Over the bow, right turn, over the bow…” the voiceover on the footage states in what looks more like an instructor’s advice on how to maneuver in open waters, rather than the panic that the central command presented it to be. At least on the video no one can be seen running for cover.

According to a US defense official who spoke with Defense News, sailors aboard the Donald Cook claimed that the Russian jets’ low altitude stirred waters and created wake underneath the ship. US personnel on the American vessels, also claimed that Su-24 was “wings clean,” meaning no armaments were present on the Russian jets that could have posed a threat to US operations in the Baltic.

Yet at the same time, the official noted, that this week’s incidents are “more aggressive than anything we’ve seen in some time,” as the SU-24 appeared to be flying in a “simulated attack profile.” 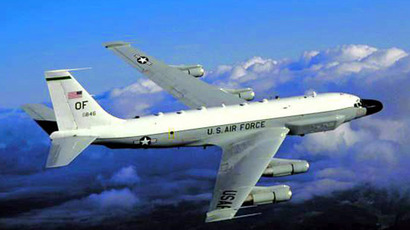 The Russian overflights have caused panic over in Washington, with White House spokesman Josh Earnest calling the actions of the Russian pilots “provocative” and “inconsistent with professional norms of militaries.”

“I hear the Russians are up to their old tricks again in the EUCOM [US European Command] AOR [area of responsibility],” Operation Inherent Resolve spokesman Col. Steve Warren said during a briefing on Wednesday, adding that the US is “concerned with this behavior.”

“We have deep concerns about the unsafe and unprofessional Russian flight maneuvers. These actions have the potential to unnecessarily escalate tensions between countries, and could result in a miscalculation or accident that could cause serious injury or death,” the US European Command said in a statement.

Meanwhile, a White House spokesman said Thursday that the US has raised the topic with Russia, and the two sides are in the process of discussing mutual concerns.
“The Unites States has raised our concerns with the Russians,” Josh Earnest told reporters at a daily press briefing. “I can tell you that communication has occurred, and we’ll seek to resolve our differences through well-established military channels.”

Speaking to the press in the port of Klaipeda, Lithuania, where the USS Donald Cook was docked on Thursday, the warship’s commander Charles Hampton has said that the US Navy will not cede space in the Baltic to Russian forces. He added that “the objection of the United States is not about fear but about safe and professional behavior between international militaries in international airspace and international waters. The US navy will continue to operate forward with allies.”

“As you have seen in the media, the flybys were very low, very fast – and were inconsistent with the normal operations of international militaries in international waters and in international airspace,” the commander stressed, while noting that his ship, as a destroyer, was designed to combat this kind of threat if necessary.

In the meantime Adm. John Richardson, the chief of naval operations, thanked the US crew for keeping their cool during the stressful situation.

“Bravo Zulu to the crew of USS Donald Cook for their initiative and toughness in how they handled themselves during this incident,” the admiral said on Facebook.

Russia has yet to comment on the incidents but most likely the Russian air craft flew from the Kaliningrad region, bordering Poland. Kaliningrad is the headquarters of the Russian Baltic Fleet, which also includes the Chernyakhovsk, Donskoye, and Kaliningrad Chkalovsk air bases.