WHY DOES THE GOVERNMENT CONSISTENTLY LIE ABOUT EVERYTHING CONCERNING LAVOY FINICUM? 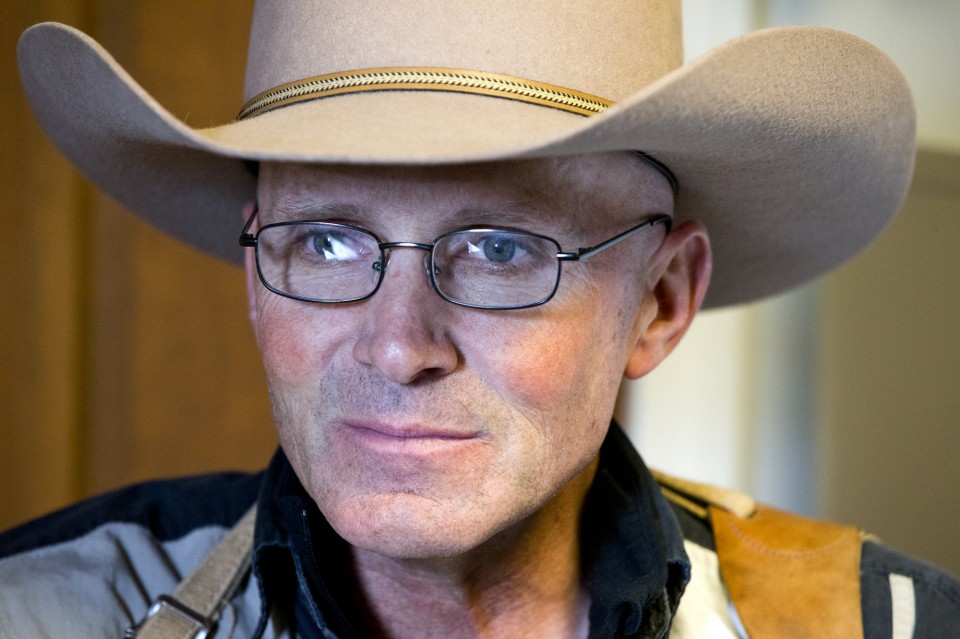 WHY DOES THE GOVERNMENT CONSISTENTLY LIE ABOUT EVERYTHING CONCERNING LAVOY FINICUM?

Because TPTB Are Afraid Of Him! This photo taken from an FBI video shows Robert “LaVoy” Finicum after he was fatally shot by police Tuesday, Jan. 26, 2016 near Burns, Ore. A video released Thursday, Jan. 28, 2016 by the FBI of the shooting death of a spokesman for the armed occupiers of a wildlife refuge shows the man reaching into his jacket (because he was just shot) before he fell into the snow. The FBI said the man had a gun in his pocket. (FBI via AP)

Whatever Reflects LaVoy Finicum’s True Martyrdom, the FBI and MSM Will Lie About

“The law enforcement agencies of the U.S. Federal Government
are rarely about telling the truth …
… especially when it concerns the making of a real martyr the
government only knows how to misrepresent the truth”

For those who are unaware, a great American patriot was recently murdered in cold blood by the U.S. Federal Government using the FBI and the Oregon State Police to do their dirty work.  The following exposé illustrates with irrefutable graphic evidence the facts surrounding the premeditated execution of LaVoy Finicum.

Were every American to view the video at this same link and study the telling graphics of LaVoy’s murder, they would come to understand the shocking criminal conduct of their government(s).  This fastidiously planned assassination, which was captured on the following video, proves beyond any doubt that the Obama Administration will kill Americans anytime, anywhere, anyhow.  They have repeatedly shown that they are without conscience or moral compass.

Simply put, the FEDs knew that LaVoy was a force to be dealt with.  We’re talking about COURAGE with a HUGE capital “C”.  There are very few like LaVoy — anywhere — and the government was concerned about his infectious patriotism and indomitable sense of rectitude.

They were particularly afraid of his resolve to educate, enlighten and empower his fellow Americans.  Just like Ammon Bundy, he was a man with a mission that would not be thwarted except by death or incarceration.

Just who was LaVoy Finicum?

Robert “LaVoy” Finicum and his wife Jeanette were foster care parents for troubled boys. Finicum estimates that over the past decade, more than 50 boys came through their ranch near Chino Valley, Arizona. The boys often landed there from mental hospitals, drug rehabs and group homes for emotionally distressed youth.

“My ranch has been a great tool for these boys,” Finicum said. “It has done a lot of good.”
(Source: Oregon standoff: Militia member loses foster kids, blames ‘pressure from the feds’)

LaVoy has been described by many news outlets, both mainstream and alternative, in a variety of ways; however, you only get the real LaVoy by listening to him directly in his videos. As follows:

As the preceding video clearly portrays, LaVoy Finicum was a no-nonsense, truth-talking, genuine American patriot who knew precisely how to handle a treasonous press corp.  He also showed that he was not one to suffer fools gladly.  Most importantly, he clearly demonstrated that he was in this fight for the long haul.  There’s no question that he would not be deterred in his mission as he had no fear of the government.

Why was the U.S. Government so afraid of LaVoy that the FBI was given strict orders to lie about him and attempt to ruin his good reputation?

What lies has the FBI told?

•  That LaVoy left the vehicle to confront the officers in an aggressive way.  Nothing could be further from the truth.  The vehicle was already shot at at least once.  LaVoy’s natural instinct was to exit the vehicle in order to draw attention away from the other passengers in the truck.  Not only did he do that, but he also sacrificed his life for those folks he was traveling with.

•  That LaVoy had a gun during the execution-style ambush by the Oregon State Police.  He did not have any firearms in his possession.

•  That LaVoy posed a threat to law enforcement when they confronted him by putting his hand in his jacket (“reaching into his jacket”).  He did not.  In fact, he had already been shot by the state police and had grabbed his wound.  The FBI knew this and fabricated an outright falsehood to justify his assassination.

•  That LaVoy was a militant.  He was not.  He was a very peaceful man who was simply exercising his constitutional rights to carry a weapon.  As a matter of fact, he was a farmer who provided a tremendous amount of support and care for troubled youth.  He was deeply loved by them, his family, his friends and his neighbors.  He was quite well-known as a peacemaker.

What follows is a stirring tribute to LaVoy Finicum.  If you watch just one video about this great American patriot, let this be the one.  It captures the man, the spirit, the soul, the true grit and raw courage of a real American patriot.

Why did the FBI release such an incriminating video?

Similar to the assassination of President John F. Kennedy, this assassination too was purposefully caught on video.  In this way it could be disseminated throughout the Internet as a way of showing the whole world that no one interferes with the NWO agenda.  After all, this whole saga is about the advancement of Agenda 21 across the USA. Of course, it is also about the promotion of the 2030 Agenda for Sustainable Development around the globe.

There is no way the NWO globalists would let a LaVoy Finicum mess with their multi-century plan to rule over the Earth.  Such a totalitarian scheme must be implemented in a manner that clearly indicates that there will be no dissent tolerated—by anyone … EVER.  The Western lands protest movement posed a viable threat to the New World Order and would not be allowed to gain traction.  This is why LaVoy was executed in such a barbaric fashion … to send a message to all of humanity just like they did with JFK.

The FEDs really screwed up by their cowardly killing of LaVoy Finicum.  They unwittingly gave the burgeoning Patriot Movement its first real martyr.  LaVoy was destined to be a martyr, and he knew it deep down inside.  His was a self-fulling prophecy that was designed in the heavens to bring down the wrath of the Almighty upon a despotic U.S Federal Government.

Now, what remains to be seen, is just how much the government will distort his honorable intentions, impeccable character, and courageous stand.  The reflexive government MO is to slash and burn anyone’s image in order to pervert justice.  When the government kills a thoroughly innocent and righteous man in cold blood and then tries to justify it, bad things are going to happen to that tyrannical regime.

Lastly, it was John F. Kennedy who quite prophetically warned the citizens of the United States of America about these trying times.