What is really going on in Syria? Is the ceasefire a Coalition deception to attack Damascus? 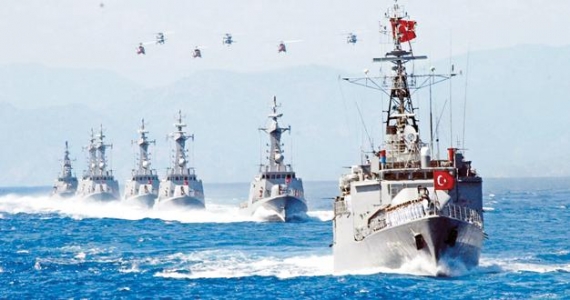 What is really going on in Syria? Is the ceasefire a Coalition deception to attack Damascus?

TMR Editor’s Note:
All we know is that something is very fishy with this hastily agreed ceasefire.  The U.S., U.K., Israel, Turkey and Saudi Arabia CANNOT be trusted — EVER — where it concerns the Mideast!

Hence, the following scenario seems quite plausible and ready to jump off in real time.  If it does, this situation will go from bad to worse to worst in flash … literally!

The degree of outright duplicity and deceit on the part of the American Coalition has been unrivalled in modern war history.  They ONLY care about grabbing all of Syria anyway they can.

Very few realize that the Anglo-American Axis is using the very same game plan that they used to start World War I, particularly with regard to the Armenian Holocaust of 1915.   The people of Syria (and Iraq) are now experiencing a Syrian Holocaust.

Realizing a massive invasion of Syria would provoke a Tactical Nuclear response by Russia, the Saudis and Turks have changed strategy: neutralize Russia first, then take Damascus in one fell swoop, with troops sent covertly as tourists inside nearby countries!

They have now commenced that new plan – an order of magnitude more cunning and perhaps even MORE outrageous – to neutralize Russia (inside Syria) first, then take Syria by directly attacking Damascus.

The map below gives you a layout of the area involved: 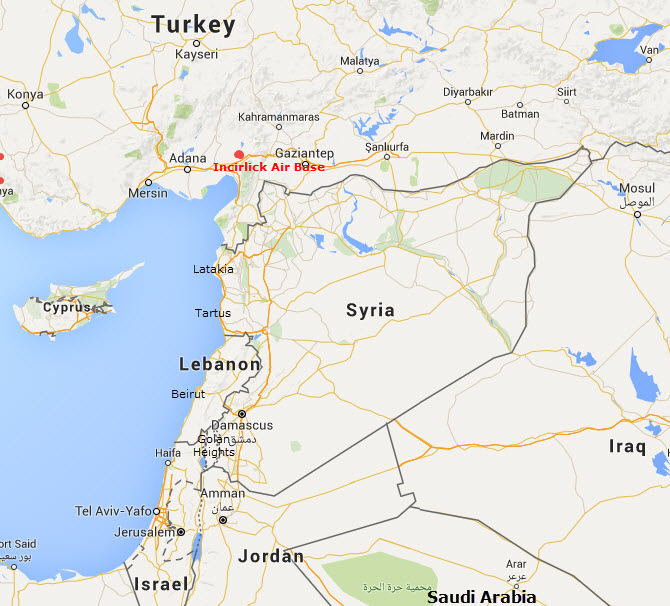 Hints that something was afoot came this morning when Saudi Arabia (SA) publicly warned its citizens not to travel to Lebanon and told any Saudis inside Lebanon to leave immediately.  About two hours later, the United Arab Emirates (UAE) told its citizens the exact same thing.

SuperStation95 made a quick inquiry to our sources in the Pentagon and they confirm that days ago, Turkey, SA and other Arab Coalition countries ordered re-deployment of

It is widely believed the submarines are targeting Russian ships which are equipped with the advanced S-300 or S-400 anti-missile system.

Upon receiving an attack order, those submarines will fire torpedoes at the Russian vessels patrolling the Mediterranean near Syria  AND FIRE AT SHIPS DOCKED IN TARTUS AND LATAKIA, with the intent of disabling (not sinking) them, to neutralize the anti-aircraft capabilities of those ships.

Since the Turks, Saudis and other nations in the “Arab Coalition against Terrorism” ALL have submarines, there will be no way to tell which nation is responsible for attacking the Russian ships.  All of them will have “plausible deniability!”

Once the ships on patrol and those in port are disabled, there will be a gaping hole in the air defenses protecting Syria.  At that time, warplanes from Incirlick Air Base in Turkey will commence attacks into Syria, through that air defense gap, and attack Damascus directly.

In preparation for this new plan, for over a week, Thousands of troops from the “Arab Coalition against Terrorism” have been quietly traveling in small groups, as “Tourists” into LEBANON, as well as to Amman, Jordan.

It is now also known that the Israeli government has been quietly working with Jordan and Saudi Arabia to prepare for a large force of Arab troops to — USE THE GOLAN HEIGHTS to travel north into Syria, to attack Damascus and topple its President Assad.

Our source in the Pentagon told us “It is in Israel’s interest to overthrow Assad because in doing so, they get to keep the Golan Heights which for years, they have only occupied.”  By working with Arabs to achieve this purpose, Israel is generating good will inside Arab nations with the goal of long-term peace and stability!  The fact Israel has authorized armed Arab troops to move, en masse, through the Golan Heights, is a risk for Israel, but one they believe will foster trust with the (new) Syrian regime.  (By deception they shall wage war.)

The covert troops are then called to come to the various warehouses to pick up the weapons they will use.

According to our sources, there are already over thirty thousand troops covertly inside Lebanon and the number is growing by the hour.

In addition, we are told there are over fifty-thousand troops inside Jordan, filling hotels and apartments throughout the Amman area.

Of course, there are still about 150,000 troops in northern Saudi Arabia for their “military exercise.”

Before the attacks commence, Turkey will move troops across the Syrian Border near Azaz to commence the fighting and draw attention to this area; an area where a Turkish invasion has been expected for weeks. As this fighting gets severe, troops in Lebanon, Jordan and Saudi Arabia will be quietly on the move, north, into Jordan. 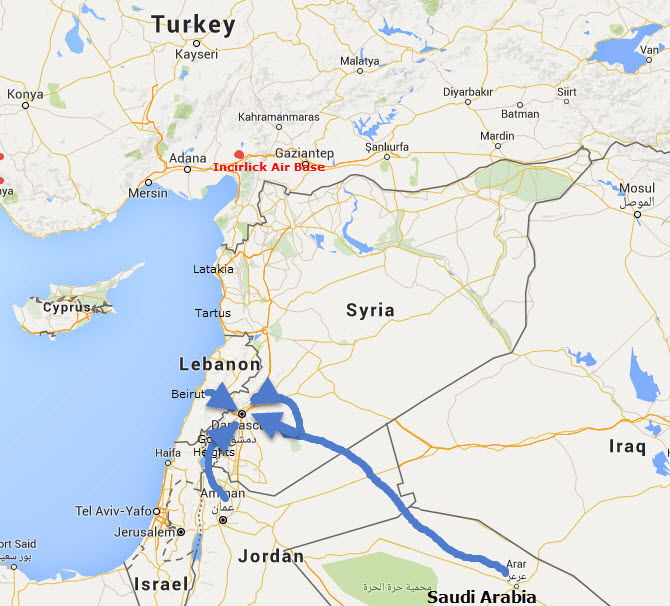 Due to the significant land distance involved, each segment of troops will be required to begin moving at different times.  This will be the only alert/advance warning the Syrians and Russians will have that the attack is on.

FRANCE EXPEDITES A CARRIER BATTLE GROUP TO THE MED

Within the last 24 hours, France – who opposes Russia’s participation in Syria — suddenly ordered its only aircraft Carrier, the Charles DeGaulle and its Battle Group, to proceed “forthwith”from the Persian Gulf to the eastern Mediterranean. Right where the Turkish subs were sent to decapitate the Russian fleet. 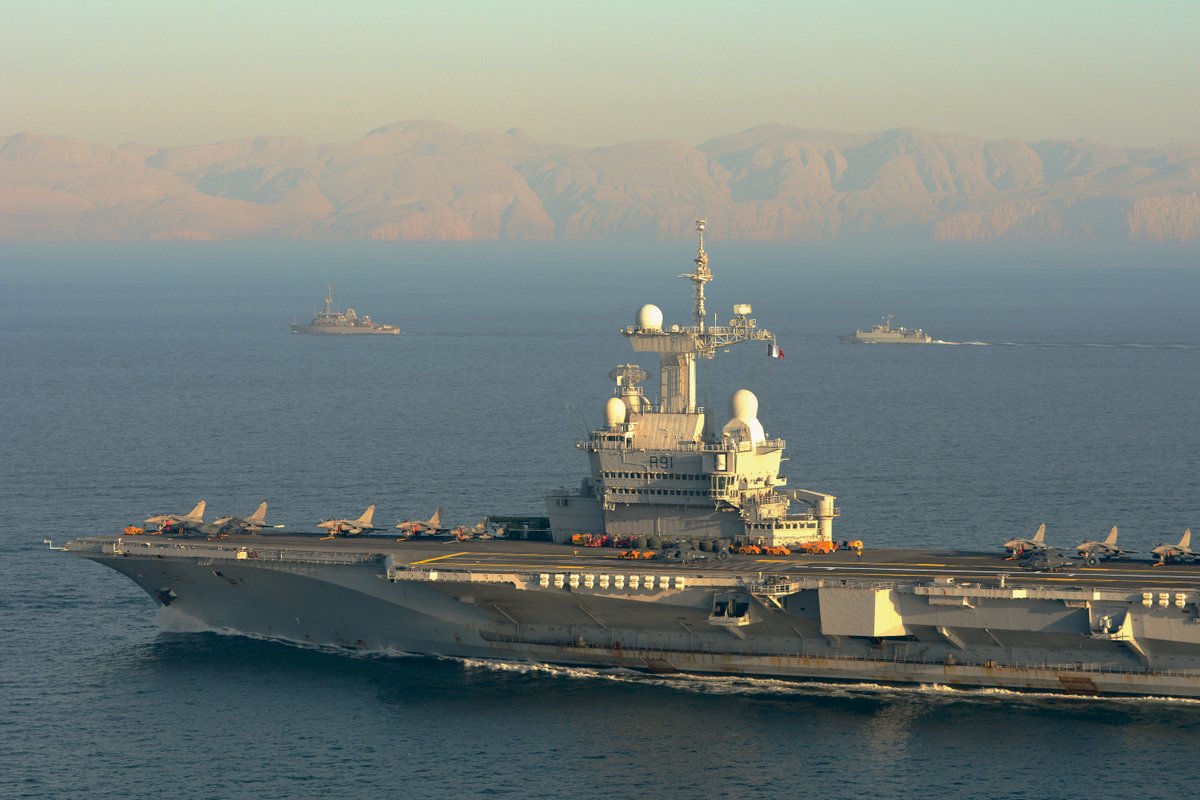 This will put French Naval Power right in the fighting, and French Air Power close enough to Latakia and Tartus to make sure the Russian s-300 and s-400 systems are knocked out, allowing the Turks coming from Incirlick air base to get through to Damascus.

It is now clear that the “cease fire” being negotiated by the US with Russia/Syria, was designed merely to be a delaying tactic, to allow for the re-positioning of SA/UAE and Turk forces!  The cease fire has been a ruse, a deception, to allow the aggressors time to reposition and redeploy in a way that prevents Russia from using Tactical nukes AND overwhelms Russian defenses, allowing a swift decapitation strike against Damascus.

Unless the Russians, who have been acting in good faith and ardently seeking solutions to the Syria issue, prepare (and prepare fast) they will be totally overwhelmed in a manner against which they cannot use nukes.  Russia will lose Syria and be humiliated on the world stage for all to see.

At that point, Russia will be given a choice:

It would be a crushing defeat for the Russians, who did everything according to International Law, but were defeated by the unimaginable treachery of those in the US, UK, France and the “Arab Coalition against Terrorism.”

Unless Russia is prepared to react by sinking the Turkish subs at the first torpedo, or makes other arrangements to protect their s-300 or s-400 anti-aircraft missile systems to prevent a gaping hole, or perhaps to cross into Turkey from Georgia and Armenia, so as to derail the Turks, all will be lost.

UPDATE 4:25 PM Eastern US Time — Bahrain has just announced its citizens should not travel to Lebanon and any who are already there should leave.  They now join Saudi Arabia and United Arab Emirates who issued same warnings earlier today . . . .