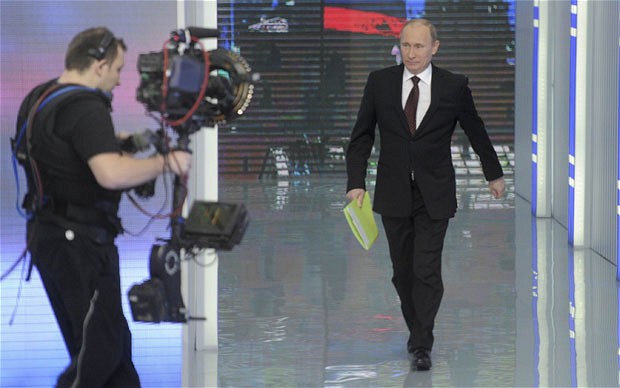 Vladimir Putin has accused his political opponents at home of trying to destabilise Russia on the West’s orders and alleged that the United States killed Libyan dictator Col Muammar Gaddafi.

By Andrew Osborn, in Moscow
The Telegragh

In a ferocious verbal tirade broadcast on state TV that lasted more than four and a half hours, Russian prime minister Vladimir Putin made it clear he was determined to return to the Russian presidency next year, scornfully dismissing recent demonstrations against him.

“I know that students were paid some money – well, that’s good if they could earn something,” he said, referring to the biggest protest of its kind since the 1991 fall of the Soviet Union last Saturday.

Facing down the biggest challenge of his almost twelve years in power, the Russian strong man insisted that the disputed parliamentary election which triggered the protests was not flawed, rejecting calls for a re-run outright.

“It properly reflected the real balance of power in the country,” he said during a live televised question and answer session that has become an annual tradition. “As for the fairness or unfairness: the opposition will always say the elections were not fair. Always. This happens everywhere, in all countries.” Repeatedly accusing his domestic critics and opponents of taking money from the West to do him down, he claimed there was a plot to destabilise Russia by effecting a velvet revolution there.

“There is a well-tested scheme to destabilise society,” he said.

Scornfully recalling Ukraine’s pro-Western Orange revolution in 2004, he said that anti-Kremlin opposition figures had advised Ukraine’s orange movement at the time and had now brought the same technology to Russia. “Some of my critics are sincere, they must be heard and respected. The rest are pawns in the hands of foreign agents. There are people with Russian passports but who work in the interests of foreign states.” Unruffled and outwardly supremely confident, he even quipped that the street protests were only possible because he tolerated freedom of expression.

“If it is the result of the Putin regime it pleases me,” he said with a relaxed smile. “I saw on television mostly young, active people clearly expressing their positions. I am pleased to see this. The fact that people are expressing their point of view about the processes occurring in the country, in the economy, in the social sphere, in politics, is an absolutely normal thing, as long as people continue acting within the law.” Mr Putin typically revels in these televised question and answer sessions and Thursday’s was no exception. His tenth and his longest yet, he used the occasion to mock the anti-Kremlin protestors who had donned white ribbons as a symbol of their peaceful protest saying he mistakenly thought they had pinned condoms to their clothing.

“I decided that it was an anti-AIDS campaign… that they pinned on contraceptives, I beg your pardon, only folding them in a strange way,” he said.

“I then took a closer look. No. In principle, my first thought was: “okay, they are fighting for a healthy lifestyle.”

Insisting he was inured to and unfazed by criticism, he played down an incident in Moscow last month which saw him publicly booed and insisted he would leave office “within a day” if he ever felt the Russian people did not support him.

Determined to return to the Russian presidency next year for a controversial third time after a March 4 vote, Mr Putin is under growing pressure to allow greater political competition and to hold a re-run of the disputed election that saw support for his ruling United Russia party tumble by fifteen percent.

But the concessions he held out were relatively minor.

He had already vowed to significantly reshuffle the government next year, while his spokesman had suggested he might even reinvent himself and show the world ‘Putin mark two.’ On Thursday, he raised the possibility of partially restoring direct elections for the country’s governors, and said the Kremlin might allow genuine opposition parties to register their presidential candidates.

“Maybe we need to take the next step in the development of our political system,” he said. Governors could in future be directly-elected by voters in their region, he added, although the Kremlin would still have to vet them for suitability first. “Such a step is possible and justified.”

But Mr Putin showed no such leniency when it came to the United States.

Last week, he dismissed criticism of the vote by US Secretary of State Hillary Clinton as part of US efforts to weaken Russia, and on Thursday he upped the ante by accusing US special forces of being involved in the killing of deposed Libyan dictator Muammar Gaddafi.

“Who did this?” Putin said. “Drones, including American ones. They attacked his column. Then – through the special forces, who should not have been there – they brought in the so-called opposition and fighters, and killed him without court or investigation.”

A spokesman for the US military said the claim was “ludicrous.” In a related aside, Mr Putin said John McCain, the US senator, was losing his mind, probably because of the torture he suffered as a prisoner during the Vietnam War.

Putin was responding to remarks McCain made in October, when the former US presidential candidate said the killing of Col. Gaddafi should make “dictators” like Putin “nervous.” Signalling that President Barack Obama’s much publicised attempt to “reset” relations with Russia was now barely alive, Mr Putin added: “Sometimes it seems to me that America does not need allies, it needs vassals. People are tired of the dictates of one country.” The carefully stage-managed performance showcased Putin’s charisma and his natural ability to command attention and was designed to boost his image and show he remained in control of Russia.

Outgoing President Dmitry Medvedev, who in September agreed to step aside for Putin after just one term in office, has never held phone-in sessions with Russians since he entered the Kremlin in 2008, instead choosing a far safer format of television interviews.

Mr Putin said billionaire Mikhail Prokhorov, who is planning to run against him, would be a “worthy, strong competitor” but that he did not wish him well because he was running as well.

Despite the recent outbreak of discontent, Mr Putin remains Russia’s most popular politician and is expected to comfortably win next year’s presidential election.

“The motherland is my life,” he said. “I believe in Russia.”