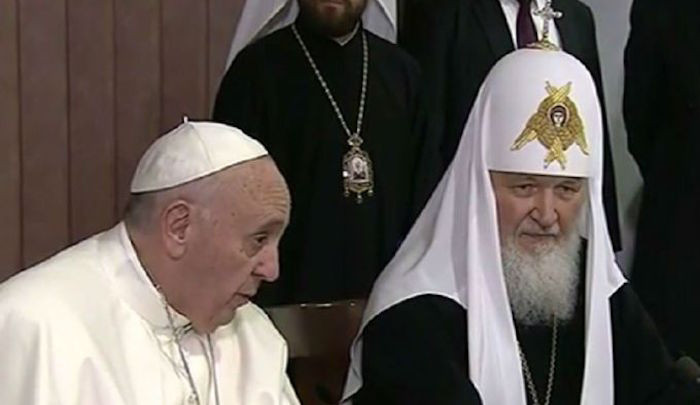 –
Two huge aircraft flew over the ocean and landed at the Havana airport, which is named after Cuba’s national hero, the poet and revolutionary José Martí. The Patriarch of Moscow and All Russia and the Pope left their aircraft and exchanged kisses at a meeting among white roses. Not only two hierarchs kissed, millions of Christians – Orthodox and Catholics did as well. The Pope and the Patriarch bestowed icons and relics upon each other, but their very meeting was a gift to all believers.

The Russian Patriarch and the Pope met neither in the Vatican nor in the Trinity of St. Sergiu but in an airport, as if in passing. But this meeting is extremely important. Russian patriarchs and Popes have not met for a millennium. During this time, Alexander I met with Napoleon in Tilsit, then the War of 1812 ensued. Nikolai II met with Wilhelm, then the terrible German war started. Brezhnev met with Ford and Nixon.

Orthodoxy links Catholicism to troubles, sorrow and misfortune. Catholicism has often come to Russia with invasions. The Teutonic Knights carried not only the cross, but also blood-stained swords. How many times have Poles attacked Russia! Polish gangs burned Smolensk, circling around Moscow, besieged the Trinity of St. Sergius. And Napoleon led Catholic Europe to Moscow. Many troubles, prejudices and fears are associated with Catholicism. But the meeting took place. What does this mean, what has changed in the mind of the world?

The world is in terrible danger; war is in the air. It thunders in politicians’ speeches. More missiles come off the conveyor belt, more military bases open on our borders. Threatening maneuvers take place all over the globe. War is no longer a ghost, but a reality standing in the doorway. The Patriarch and the Pope met to forestall war, to tame it with their pastoral message.

Christianity is in trouble: altars are desecrated, Christians are hunted for their religion as in the early years, driven from their monasteries, their homes and killed. Terrorists burn down shrines, desecrate icons all over the world, oppressing the Orthodox, the Catholics, the Copts.

Liberal Europe has driven Christ out of its soul. What is same-sex marriage? What is demonic ‘enrichment’ but disdain for spiritual values? What is acquisitiveness? Nihilism? What is a call for rebellion and revolution, in culture, ethics, family, morality?

The Pope and the Patriarch lifted up their voices in defense of divine Europe, European Christianity whether gothic or domed.

The Russian Orthodox Church today is on the rise. It opens new monasteries, erects altars; there are more Orthodox theological schools, and new theological works are published. After 1991, when the church was revived and began to restore its influence in society, Orthodox thinking returned among the people at historical events. The 70th anniversary of our victory in the Great Patriotic War was an Orthodox holiday.

And what about the Crimea returned to its native Russian harbor? Hersonissos – the mystical place where Orthodoxy arose and spread across Russia to the Pacific Ocean – came back to us together with the Crimea. The annexation is interpreted by the Orthodox as a return to the bosom of the Russian state’s sacred and mystical values.

‘The Immortal Regiment’ V-Day celebration last May turned into an Easter procession. Millions of people carried on high portraits of family members who fought in the Great Patriotic War, like icons, the procession not a memorial but an Easter resurrection.

Of course, the Patriarch and the Pope have neither armies nor tanks, nor planes to improve the world. They have prayer. If a person prays, if all mankind prays, every soul, all mankind will be transformed in this passionate striving for holiness and beauty, the eternal. Prayer covers the world with a luminous, impenetrable veil that is perhaps more powerful than a missile defense.

The Russian Church has always been close to the people, trusting the people, supporting the the failing, decrepit state. And when the state had almost completely disappeared, the church took its place, leading brigades, regiments, inspiring leaders and heroes with hope. The Russian Orthodox Church today is engaged in a dispensation of life, explaining today’s culture as a continuation of the great Christian traditions. It appeals to the public not to forget the idea of ​​justice, that the rich not boast of their wealth, the poor not become discouraged and that harmony reign.

The Pope and the Patriarch conferred in private for two hours, then went out to the people, their  faces shining with smiles, bliss, love and joy. When they exchanged a fraternal embrace of the divine, all mankind exulted with them. The declaration they addressed to the people was not a parchment, a scroll, a manuscript. The text they read was universal.

There were many great patriarchs in Russia, many of whom are now glorified as saints. There were also many great Popes who became holy through their works and martyrdom. Two of today’s arch priests undoubtedly will go down in history. Among slander, outrage, saber-rattling they embraced and proclaimed an everlasting covenant for Christianity: ‘Do not curse, but bless!’ The light of this meeting will spread for many years and we will experience the amazing effects of this astonishing coming together of the leaders of two great Christian faiths.

Hostility gives way to reconciliation. It was for a reason that Jesus said in the Sermon on the Mount: ‘Blessed are the peacemakers for they will be called the Sons of God.’