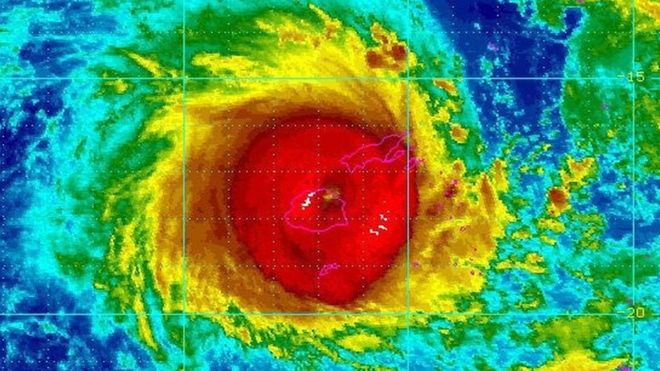 Authorities in Fiji are assessing the damage after the Pacific nation was hit by the most powerful cyclone in its history.

There are reports of entire villages flattened. Electricity lines are down and a nationwide curfew is in place.

About 750 evacuation centres have been opened and airports remain closed.

The category five storm – the highest level – has moved westward since making landfall at 18:30 local time (06:30 GMT) on Saturday in the north of Fiji’s main island, Viti Levu.

It changed direction at the last minute, sparing the capital Suva the full force of its winds, Reuters news agency reports.

More than 1,000 people were sheltering in evacuation centres on the second largest island of Vanua Levu, north-east of Viti Levu, as of Sunday morning, the Fiji Broadcasting Company said.

Some villages reported that all homes had been destroyed, Jone Tuiipelehaki of the UN Development Programme tweeted after the storm hit.

He said 50 homes in Navaga village on the smaller Koro Island had been reported.

An elderly man died on Koro Island when a roof fell on him, officials said.

The full extent of the damage across Fiji is still unclear.

Assessment teams are being sent to the affected areas, the Fiji Times reports.

–
On Saturday, the government imposed a nationwide curfew and declared a 30-day state of emergency, giving extra powers to police to arrest people without a warrant in the interest of public safety.

Before the storm landed, Prime Minister Frank Bainimarama warned that Fiji was facing “an ordeal of the most grievous kind”.

“We must stick together as a people and look after each other. Be alert and be prepared.”