“Brexit” Looms As Cameron Pushes For Reforms In All-Nighter 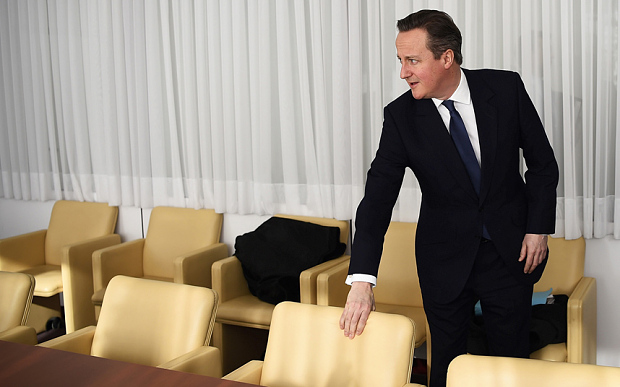 Prime Minister David Cameron arrives for a meeting on the sidelines of the EU summit in Brussels Photo: Reuters

“Brexit” Looms As Cameron Pushes For Reforms In All-Nighter

“I was here till 5 o’clock this morning working through this and we’ve made some progress but there’s still no deal.”

That’s from British PM David Cameron, who was apparently up all night in an effort to understand why his country should stay in the EU. Unless Cameron hears what he wants to hear, he will not campaign for the UK to remain in the bloc ahead of an expected referendum on membership in June.

“Britain has always had an ambiguous relationship with the bloc, staying out of two of its most ambitious projects, the Schengen border free zone and the euro common currency,” Reuters writes. “Its exit would end the vision of the EU as the natural home for European democracies and reverse the continent’s post-World War Two march toward ‘ever closer union.’”

Cameron is seeking changes that will reduce his country’s financial burden as it relates to refugees and other EU nations. “As I have said, I would only do a deal if we get what Britain needs, so we are going to get back in there,” he said, after marathon talks.

“Paris has pushed for amendments to ensure Britain cannot veto actions by the euro zone countries or give City of London banks competitive advantage through regulation,” Reuters goes on to note. “A group of east European states chaired by the Czechs is trying to hold back how far their citizens can be denied welfare benefits in Britain or have family allowances reduced.”

Meanwhile, the Conservative Party and the UK press are pushing for reforms. “Britain’s place in Europe has been allowed to fester for too long” Cameron says, but there’s “now a chance to settle this issue for a generation”.

“For now I can only say that we have made some progress but a lot needs to be done,” EU president Donald Tusk said.

UK business leaders are skeptical. “Mr Cameron’s team has been lining up business leaders to come out in support of his EU deal next week, even before any agreement has been reached,” FT says, before noting that although “a letter from supportive business leaders is planned for next week, with  80 out of Britain’s FTSE 100 companies backing Britain staying in the EU, “that number was seen as speculative by some in the Remain camp and research by the Financial Times this month revealed that some top companies were reluctant to get drawn into the debate.”

Here’s a bit of color from Bloomberg on what “Brexit” would mean for London’s “City”:

Right. So this isn’t just symbolic. “While no FTSE 100 company said it wanted Britain to leave the EU, only 18 were prepared to state unequivocally that they supported continued membership,” FT goes on to note.

Right. Because in reality, there aren’t very many solid arguments for supporting continued memebership and whatever arguments were left have been significantly diminished by the bloc’s worsening migrant crisis. Still, Cameron is calling for a “live and let live approach.” Here’s a look at UK trade vis-a-vis the rest of Europe.

But numbers aren’t likely to sway the British people who are prepared to opt out of the ill-fated union.

Cameron says he’s “battling for Britain”, but in reality he’s “battling for the EU.” With the future of the union already in question thanks to the festering migrant crisis, Britain may well be better off abandoning this sinking ship. “It’s the EU in question, not just one country in the EU,” French President Francois Hollande said on Friday.

Indeed. And the time has now come for Britain to decide whether it’s prepared to go down with this ship, or forge a path ahead on its own. In the meantime, expect volatility, PIMCO says. “Irrespective of the twists and turns in the debate over U.K.’s planned referendum on EU membership, uncertainty over the result is likely to weigh on U.K. markets for a good few months yet,” Mike Amey, Pimco portfolio manager said in a press release. Right. it is likely to cast a pall on markets “for a good few months yet,” as you can tell from the below: