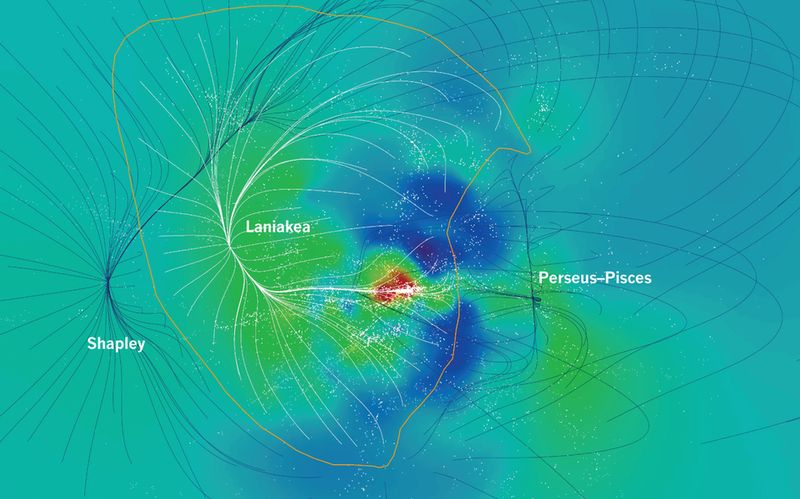 The Great Attractor –“Exists Within an Immense Supercluster of 100,000 Galaxies” (Weekend Feature)

A STRANGE intergalactic force is drawing our Milky Way galaxy inward. We don’t know what, or why. But a hidden swarm of hundreds of nearby galaxies just discovered by Australian astronomers may help reveal the identity of the ‘Great Attractor’.

This pack of galaxies has been spotted by astronomers using CSIRO’s Parkes Observatory in NSW. The international study involved researchers from Australia, South Africa, the US and the Netherlands, and was published today in Astronomical Journal.

Despite being ‘just next door’ in astronomical terms — a mere 250 million light years away — these galaxies have remained hidden from view because they are on the opposite side of our own.

The intensity of stars and dust crowded together along the plane of the Milky Way is directly in the line of sight — masking everything behind it from view.

That something must be there has been known for some time.

Its immense gravitational pull — the equivalent of a million billion Suns — has been observed through calculations of strange deviations in the flight path of nearby galaxies.

In the absence of any indication as to what it may be, astronomers have simply dubbed it the ‘Great Attractor’.

Our Milky Way is just one of hundreds of thousands of local galaxies ensnared by its grasp.

And we’re hurtling towards the mysterious source of this attraction force at more than two million kilometres per hour.

“We don’t actually understand what’s causing this gravitational acceleration on the Milky Way or where it’s coming from,” says study lead author Professor Lister Staveley-Smith of the University of Western Australia.

“We know that in this region there are a few very large collections of galaxies we call clusters or superclusters, and our whole Milky Way is moving towards them.”

Essentially, all we know is that there is an immense — but probably diffuse — concentration of mass lurking some 250 million light years away.

Is it a monster-black hole? Or something else?

“Some physicists are even considering the possibility that the mass fluctuations in the universe are so significant that astronomers may be fundamentally misinterpreting the relationship between gravity and motion.”

It all remains speculation.

But observing and understanding the distribution and behaviour of the new galaxies may uncover vital clues.

“The ‘Great Attractor’ lies at the intersection of several large-scale filaments of galaxies,” says Dr Barbel Koribalski of CSIRO Astronomy and Space Science. “One could picture a giant Hoover with galaxies near and far slowly streaming towards it. We can’t see much of this Hoover, but we can measure the motion of the galaxies.”

What is doing the hoovering is the issue.

How’s this for a pie in the sky measurement:

“Its immense gravitational pull — the equivalent of a million billion Suns — has been observed through calculations of strange deviations in the flight path of nearby galaxies.”