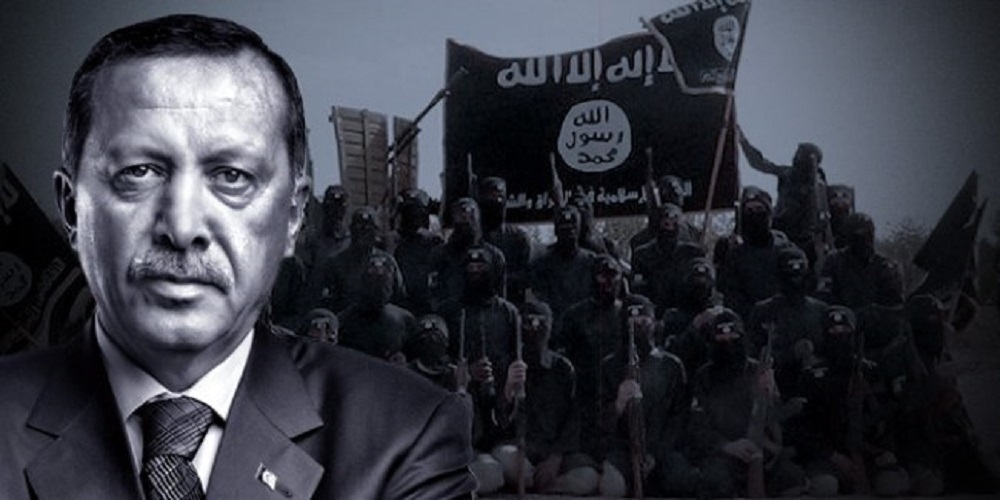 Editor’s note:  Dozens of shiny new Toyota trucks lie burned to a crisp, their occupants and their Saudi and Qatari bought weapons along with their Raytheon missiles, all for naught.  Sorry about that, not so much.

TEHRAN (FNA)- A Tal Rifat-bound column of fresh militants recruited and trained in Turkey was targeted by the Syrian and Russian warplanes on a road near the newly-liberated city in the Northern part of Aleppo on Tuesday, sources said, adding that 300 terrorists were killed in the air raid.

The Russian and Syrian fighter jets, in a joint operation, tracked and targeted an over 300-member convoy of fresh militants, who had earlier crossed the Syria-Turkey border to join the terrorist groups operating in Tal Rifat and its surroundings.

The militants column was on a road connecting Azaz and Tal Rifat.

(CNN) Turkey’s defense minister said his country has no intention of sending ground troops into Syria amid international concern over Ankara’s shelling of armed Kurdish groups in the war-torn country.

In addition to the killing and wounding of almost the entire members of the column, the terrorists’ vehicles and weapons were also destroyed in the air raid.

Reports said earlier today that the Turkish Army’s artillery units have been pounding the strategic city of Tel Rifat North of Syria’s Aleppo province that was taken back by the Kurdish fighters from the terrorists last night.

Positions of the Kurdish “People’s Protection Units” (YPG) and the Syrian Democratic Forces (SDF) in Tal Rifat have been under the massive shelling of the Turkish artillery since early hours of this morning.

The Kurdish fighters that are backed up by the Russian air force have been making rapid advances in the Northern parts of Aleppo and the Turkish artillery shelling seems to be aimed at stopping their advances against the militant groups in the region that is close to the border with Turkey.

On Monday night, the YPG, who have recently bonded with the government, prevailed over the terrorists in the highly strategic city of Tal Rifat in Northern Aleppo and captured the city.

The YPG, who enjoyed the Russian air backup, prevailed the terrorists’ positions from the Western direction and shook hand with other Kurdish troops who entered the town from the North.

The YPG Kurds have recently bonded with the Damascus government. The Syrian army sent several arms cargoes to the YPG troops in the Northeastern province of Hasaka and trained the first group of Kurdish volunteer forces in the provincial capital city of Hasaka last week.

FNA battlefield dispatches said Monday night that heavy clashes are underway on the Eastern outskirts of the city as Ahrar al-Sham terrorists and groups of Al-Nusra Front – that have just arrived in Northern Aleppo via the Turkish territories – are retreating from their positions.

The Kurdish fighters, backed up by the Russian fighter jets, Syrian army artillery units and popular forces launched the assault on the terrorists in Tal Rifat in two fronts.

The first units of the YPG engaged in clashes with the terrorists from the Western direction of the strategic town North of Aleppo province, while other units started an attack from the Northern flank.

The first group arrived at the Western gates of the town on Sunday, while the second group had to purge several small towns and villages to open up the path to Tal Rifat and, hence, arrived in the Northern parts of the city on Monday.

The second groups of Kurdish fighters approaching the strategic town from the North comprised of YPG and SDF (Syrian Democratic Forces) units.

The SDF that is comprised of mainly Kurdish fighters as well as a few hundred Syrian Arab dissident forces have received trainings from the US and have been provided with scanty US-coalition air support in their battles in Raqqa province in Northeastern Syria; but in Northern and Northwestern battlefronts, they have been operating alongside the YPG and received the Russian air backup in their Aleppo wars that started with the conquest of Tishrin Dam on the Euphrates early in February.

Assisted by the Syrian army – that has along with popular forces and Hezbollah conquered almost all militant-held regions in Eastern, Southern, Western and Northwestern Aleppo province – and Russian air support, the Kurdish forces fighting against the terrorists in North-Northeast Aleppo province have been making striking advances against the Al-Nusra, Ahrar al-Sham and ISIL terrorists in February.

“The militant groups have been surprised by the rapid offensive of the Kurdish fighters and have been pinned down behind their defense lines in Tal Rifat,” sources from the Western flank told FNA on Sunday.

“The Russian warplanes carried out several combat sorties over the militants’ position in the around the town and destroyed their defense lines,” they added.

Later on Sunday, the Kurdish fighters, backed by Russian fighter jets, engaged in intense clashes with the terrorist groups at the Western entrance of the strategic town and captured several building blocks.

To hinder to slow down the rapid advances of the Northern units, Turkey relocated hundreds of terrorists from Idlib province to Aleppo via its soil in the weekend.

“At least 400 militants were transferred to Northern Aleppo to help the terrorists who are losing the ground to the Kurdish fighters who are backed by Russian air force,” Arab media outlets disclosed on Sunday.

In addition, the Turkish army started days of nonstop pounding of the Kurdish fighters in Northern Aleppo on Friday to pin them down specially in the North and prevent them from shaking hands with other Kurdish troops fighting in the Northern Aleppo town.

The Turkish army shelling has targeted both Syrian army positions in Northern Lattakia and Kurdish fronts in Northern Aleppo and continued for four days now.

Several villages in vast areas of Afrin in Northwestern Syria came under artillery shelling by the Turkish army and terrorist groups all throughout Sunday.

Report said on Saturday that Turkey’s army shelled Kurdish People’s Protection Units (YPG) positions near the city of Azaz in Northwestern Syria. Turkish forces started shelling an airbase and a village, recently captured by Kurds, in Aleppo province in Syria.

A Kurdish official confirmed that the shelling targeted the Minaq air base located South of Azaz in Aleppo province.

“Turkish forces started shelling the YPG positions on the territory of the Minaq airbase,” a YPG spokesperson told the Arabic-language TV channel, Al-Mayadeen on Saturday.

Turkey vowed on Sunday that it would not allow the pro-government forces in Syria to capture the militant-held city of Azaz close to its border.

On Monday, the Kurdish “People’s Protection Units” (YPG), enjoying Russian air backup, continued to advance against the militant groups in the Northern part of Aleppo province and stormed the militant groups’ defense lines near the small town of Kaljabrein in the surroundings of Tal Rifat, killing, at least, 40 terrorists.

The Russian fighter jets have played significant role in the recent victories of the Kurdish fighters in the province.

The Kurdish fighters seized control over Kaljabrein-Tal Rifat road and killed one of the commanders of Jeish al-Fatah, nom de guerre Ismayeel Naddaf.

Later on Monday, a main line of supply of the terrorist groups to Tal Rifat was cut by the heavy mortar shelling of the YPG forces.

“The YPG forces, deployed on the road of Ein al-Daqnah to Kaljabrein, pounded a road connecting Tal Rifat to the towns of Azaz and Marea in the Northern part of Aleppo province, leaving the militants in Tal Rifat with no way towards its Northern side,” sources said.

Sources also said “both the Kurdish fighters and the terrorists have been targeting each other by their artillery shelling since the early hours of this (Monday) morning”.

A report said earlier on Monday that the Syrian army once again deployed the Russian T-90 tanks against the terrorists in Aleppo Front in Northern Syria.

Former Head of Russia’s Federal Security Service Nikolai Kovalyov warned Turkey and Saudi Arabia against sending ground troops to Syria, saying that Russian warplanes are likely to launch airstrikes on their positions if they deploy in the war-torn country.

“The Turkish and Saudi officials are well aware that in case of deployment of their forces in the Syrian territories, the Russian air force will likely bomb them,” Kovalyov, also a member of the State Duma’s security and resistance to corruption committee, was quoted as saying by al-Mayadeen news channel on Tuesday.

“If the Saudi and Turkish ground forces enter Syria, they cannot be distinguished from the terrorists and Russia will act upon the demand of the legal Syrian government,” he added.

His remarks came after Saudi Arabia and Turkey said they plan to send ground forces to Syria.

The idea of Riyadh’s possible participation in ground operations in Syria was first raised on February 4 by Ahmed Asiri, a spokesman for the Saudi Defense Ministry.

Turkey and Saudi Arabia are also both part of an effort to create an alleged “Islam Army,” ostensibly aimed at combating terrorism in the region and consisting of 34 Sunni Islam nations.

Almost the entire range of extremist and terrorist groups are supported by Saudi Arabia and Turkey, with their key commanders and leaders being Saudi nationals. ISIL, Al-Nusra and other extremist groups pursue the same line of ideology exercised and promoted by Saudi Arabia, Wahhabism. Hundreds of Saudi clerics are among the ranks of ISIL and Al-Nusra to mentor the militants.

Wahhabism is now the only source of the textbooks taught at schools in the self-declared capital of the ISIL terrorist group, Raqqa, in Northeastern Syria resembling the texts and lessons taught to schoolgoers in Saudi Arabia. The Wahhabi ideology, an extremist version of Sunni Islam that is promoted almost only in Saudi Arabia, sees all other faiths – from other interpretations of Sunni Islam to Shiism, Christianity and Judaism – as blasphemy, meaning that their followers should be decapitated as nonbelievers.

Riyadh has been a member of the US-led coalition that has been launching airstrikes against Daesh in Syria since September 2014, without the permission of Damascus or the United Nations. In December 2015, Saudi Arabia started its own Muslim 34-nation coalition to allegedly fight Islamic extremism.

Daesh or ISIL/ISIS is a Wahhabi group mentored by Saudi Arabia and has been blacklisted as a terrorist group everywhere in the world, including the United States and Russia, but Saudi Arabia.

Damascus, Tehran and Moscow have issued stern warnings to Riyadh, stressing that the Saudi intruders, who in fact intend to rescue the terrorists that are sustaining heavy defeats these days, will be crushed in Syria.

Syrian Foreign Minister Walid Muallem warned that any ground operation in Syria without Damascus’ approval is an “act of aggression”, warning that the Saudi aggressors “would go back home in coffins”.

“They claim they will send troops (to Syria) but I don’t think they will dare do so. They have a classic army and history tells us such armies stand no chance in fighting irregular resistance forces,” Jafari said.

“This will be like a coup de grâce for them. Apparently, they see no other way but this, and if this is the case, then their fate is sealed,” he added.

Jafari, said this is just cheap talks, but Iran welcomes the Saudi decision if they decide to walk on this path.