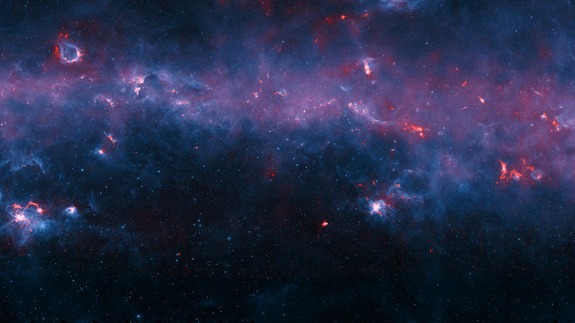 Captured by the APEX telescope, it’s the most detailed image of our galaxy ever captured from the Southern  hemisphere.

Experience the Milky Way in a brand new light.

A composite of more than 700 observations captured by the telescope, it’s themost detailed image ever created of our galaxy from the Southern hemisphere, and the first time that the southern Milky Way has been shown at the submillimeter wavelengths between infrared light and radio waves:

Submillimeter telescopes are useful for observing very cold and dusty regions of the universe, such as the gas clumps floating throughout our galaxy from whichnew stars are born. These star-forming regions are “often dark and obscured due to the dust,” the ESO stated, but they “shine brightly in the millimeter and submillimeter part of the spectrum.”

“We can for the first time get a full census of the star-forming regions within our own galaxy,” ESO scientist Carlos De Breuck told CNN. “This allows us to find all such regions and to study their properties.”

Watch the video below to get a closer look at the Milky Way map, or explore the entire, zoomable 187 million pixel image for yourself:

Called the APEX Telescope Large Area Survey of the Galaxy (ATLASGAL), the mapping of the Milky Way was conducted between July 2007 and November 2010.

“ATLASGAL has allowed us to have a new and transformational look at the dense interstellar medium of our own galaxy, the Milky Way,” astronomer Leonardo Testisaid in a statement. “The new release of the full survey opens up the possibility to mine this marvelous dataset for new discoveries.”