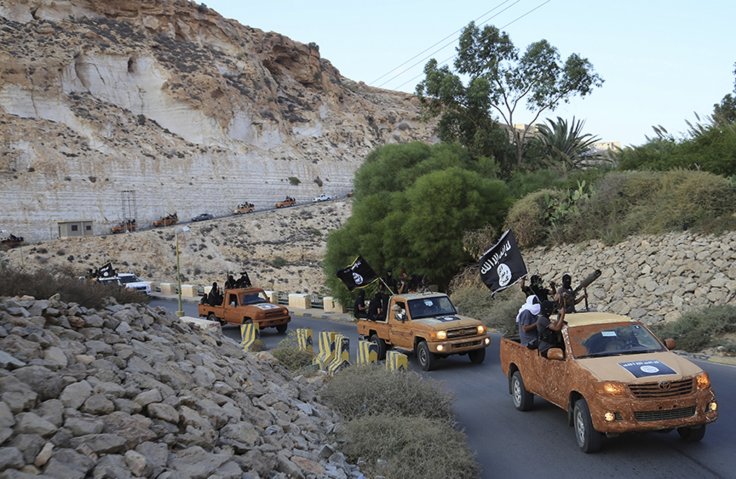 Isis in Libya: Islamic State driven out of Derna stronghold by al-Qaeda-linked militia 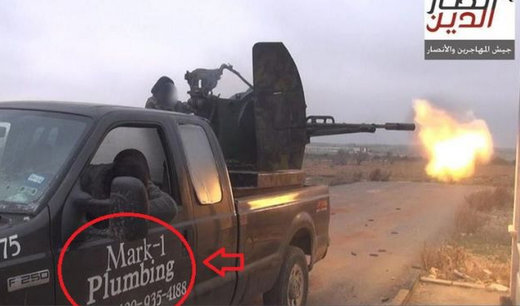 From Texas to Libya, via Turkey and Syria: terrorism has never been more ‘homegrown’

The nightmare is not over for Libya. In fact, it may only have just begun. Sirte, Muammar Gadaffi’s birthplace and the last major city to fall to the ‘rebels’ in 2011, is once again occupied by terrorists. In recent communication with the leadership of Libya’s Tribes’ Council, US contacts James and Joanne Moriarty were told that the leadership of ISIS (Islamic State), Boko Harim (‘ISIS in Nigeria’), Ansar al-Sharia (‘ISIS in Libya’), and possibly others, all gathered in Sirte, Libya, for meetings that took place around the 9th and 10th of December 2015. 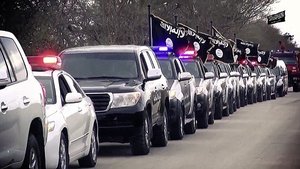 No kidding: This is the actual fleet of cars that rolled off a cargo ship into Sirte port when Libya was (re)invaded by ISIS terrorists in early 2015.

In their discussion with myself and Joe Quinn on our Behind the Headlines radio show on Sunday December 13th, the Moriartys relayed how Sirte, once a thriving city on Libya’s Mediterranean coast, but now a stronghold of cut-throats and bandits, was placed on full lock-down for the mid-December terrorist coven.

Much of Sirte’s population of 300,000 either succumbed to genocide or fled during and after the violent 2011 coup and NATO bombardment in Libya (told fully in horrific detail for the first time here). By mid-2012, about 70% of the population had returned to Sirte, then spent three years attempting to rebuild until, in February 2015, ‘ISIS’ terrorists appeared out of nowhere – in a fleet of brand, spanking new Toyota pick-ups – and commenced a siege of the city.

In August 2015, ISIS brutally quelled a rebellion by citizens who took up arms to try to push the terrorists away from their city. Desperate, the Council of Deputies (one of Libya’s two ‘legitimate’ governments – three if you include ISIS) formally requested support from the Arab League in the form of airstrikes against the terrorists. 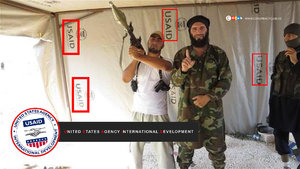 The international community’s response? Nothing, nada, zilch. The Saudi-led alliance of rich Gulf states was too busy targeting civilians in the uprising against Western-backed dictatorship in Yemen, while the US and friends just watched from their aircraft carriers, warships, jets, satellites, and regional military bases as ISIS rapidly took control of about half of Libya over the course of last year.

By late November 2015, Sirte was under the complete control of ISIS. With the Russian airstrike campaign against ISIS targets in Syria by then two months old, a UN report in early December warned that up to 5,000 ISIS terrorists were in Libya, with half of them concentrated in Sirte, and that the terrorist organization “sees the country as a retreat zone and strategic hub for recruits unable to reach its Syrian heartland.”

US military propagandist Joseph V. Micallef lays out the ‘retreat’, which is really a vast expansion:

It’s believed that about 70% of the Islamic State militants in Libya are foreigners, with the bulk coming from Syria, Iraq, Egypt, Sudan and Tunisia. In recent months there have been consistent reports that Islamic State has been transferring “administrators” and “military commanders” to Libya to take direct control of its militants there. Moreover, Islamic State websites in Libya have been prominently featuring the slogan that “Sirte will be no less than Raqqa,” suggesting that if Raqqa falls, Sirte may become the new capital of Islamic State. […]

Islamic State is not being contained. It has now expanded to 35 international affiliates. It is zeroing in on North Africa in general, and on Libya in particular, in an attempt to create, on a far vaster scale, an even bigger Islamic State on the very edge of Europe’s doorstep.

‘Retired’ Israeli spook Jacques Neriah was kind enough to round out the nightmare scenario for Europeans:

“We are taking about kamikaze pilots who can take off in [one of the aircraft stolen from the Libyan military and various local airports] and crash themselves into the Vatican, for instance. It only takes an hour and a half across the Mediterranean Sea from Libya to Rome.” 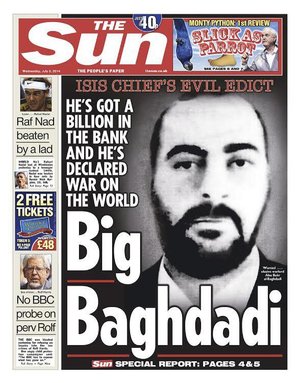 On the heels of the UN report, Iranian news agency FARS reported that ISIS leader Abu Bakr al-Baghdadi fled Syria via Turkey, and with CIA assistance. The story goes that Baghdadi was treated in Turkey for injuries sustained in an Iraqi airstrike against his convoy, presumably based on intelligence provided to Baghdad by the Russians, in October. With the Russians carrying out actual airstrikes against ISIS in Syria, Baghdadi’s handlers decided he couldn’t return to Raqqa, so he was spirited out of Turkey… and arrived in Sirte, now ”the safest jihadist stronghold in the world”, around December 9th.

And so, while there were media reports about al-Baghdadi’s retreat to Sirte, observers on the ground have provided a far more detailed account of what’s going on there to James and Joanne Moriarty. According to their sources in the Libyan Tribes’ Council, the terrorists in Sirte initiated a complex operation to make safe passage for their leaders – residents were cleared out, a perimeter was imposed, and a communications black-out thrown over the city. The Moriartys even know the exact address at which Baghdadi and friends were gathering.

One would think, given Western leaders’ commitment to defeating ‘world enemy number 1′, the Islamic State terror group, that their media arms would have reported this 24/7, and that their intelligence and security services would have either tracked the world’s most wanted arriving in Libya, or capitalized on the Libyan tribal leaders’ intelligence to launch an airstrike and take out al-Baghdadi and his cohorts all at once. But then, to believe that, one would have to believe that the ‘war on terror’ really is a ‘clash of civilizations’, and not a charade managed by Western intelligence to justify imperial control of the Middle East and beyond…

Here is the real story about the ‘Islamic State’ you won’t hear anywhere else: