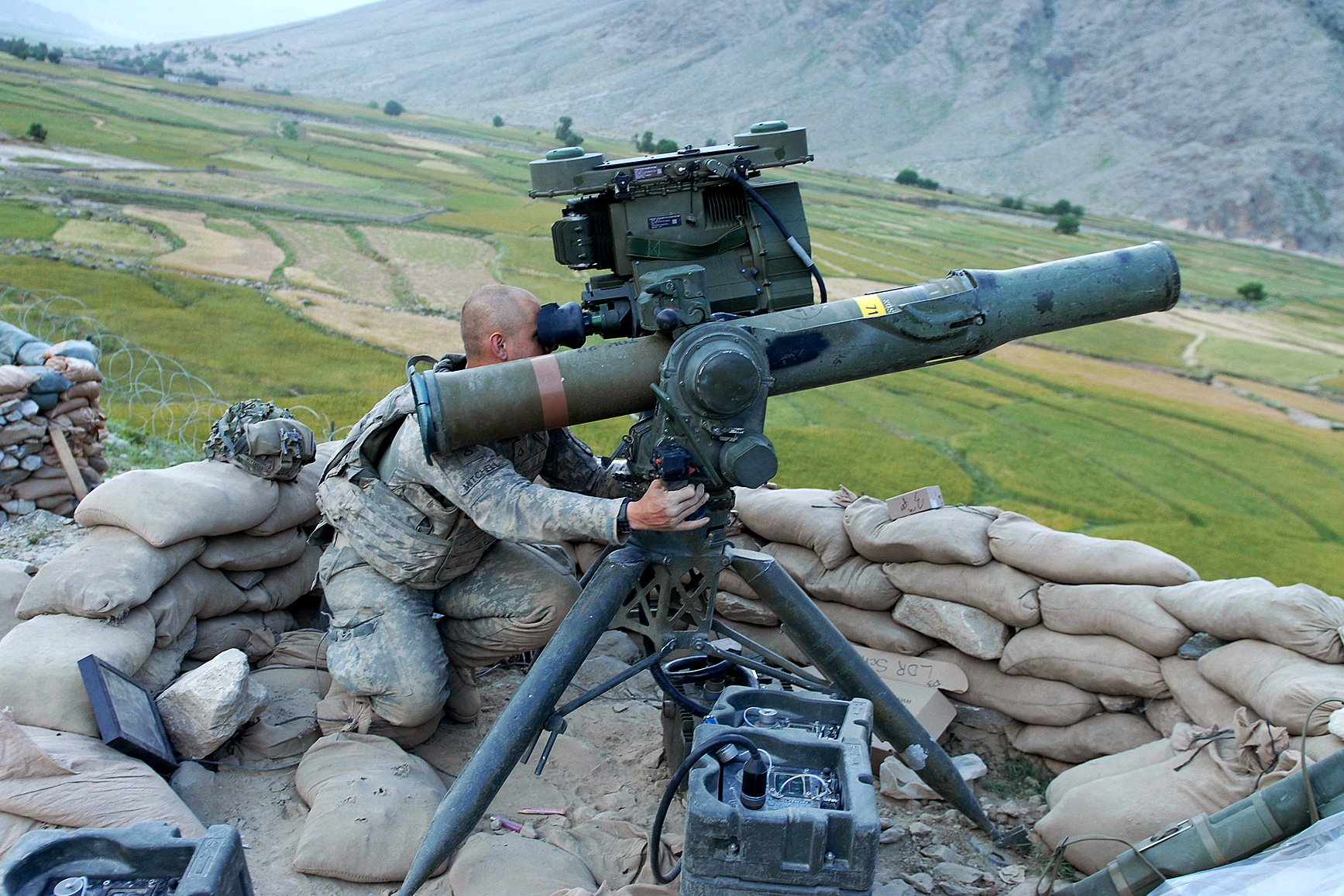 A tripod-mounted TOW unit of the U.S. Army in Kunar Province, Afghanistan in May 2009. (U.S. Army photo by Sgt. Amber Robinson)

TEHRAN (FNA) – Representative of Iraq’s State of Law Coalition at the parliament Awatif Naima revealed that the recent US heliborne operations in Huweija, Kirkuk province, was a plot to help the ISIL terrorists.
–

“The American forces have recently expanded their heliborne operations in Huweija, Beiji and Sharqat in the Northern parts of Salahuddin province with the goal of assisting the ISIL terrorist group,” Naima said in a press conference.

He said that the Iraqi army, security and volunteer (Hashd al-Shaabi) forces have witnessed repeated dropping of foodstuff and arms packages by the US aircraft to the ISIL terrorists.

The US and some other coalition members have been supplying arms to different actors in Iraq.

During the past few years, Iraqi officials have on different occasions blasted the US and its allies for supplying the ISIL in Syria with arms and ammunition under the pretext of fighting the Takfiri terrorist group.

The Iraqi army and volunteer forces discovered US-made military hardware and ammunition, including anti-armor missiles, in terrorists’ positions and trenches captured during the operations in the Fallujah region in Al-Anbar province.

The Iraqi forces found a huge volume of advanced TOW-II missiles from the Takfiri terrorists in al-Karama city of Fallujah. The missiles were brand new and the ISIL had transferred them to Fallujah to use them against the Iraqi army’s armored units.

Also in October, the Iraqi forces discovered US-made military hardware and ammunition from terrorists in the town of Beiji.

“The military hardware and weapons had been airdropped by the US-led warplanes and choppers for the ISIL in the nearby areas of Beiji,” military sources told FNA.

In February, an Iraqi provincial official lashed out at the western countries and their regional allies for supporting Takfiri terrorists in Iraq, revealing that the US airplanes still continue to airdrop weapons and foodstuff for the ISIL terrorists.

“The US planes have dropped weapons for the ISIL terrorists in the areas under ISIL control and even in those areas that have been recently liberated from the ISIL control to encourage the terrorists to return to those places,” Coordinator of Iraqi popular forces Jafar al-Jaberi told FNA.

He noted that eyewitnesses in Kirkuk province had witnessed the US airplanes dropping several suspicious parcels for ISIL terrorists in the province.

“Two coalition planes were also seen above the town of Al-Khas in Diyala and they carried the Takfiri terrorists to the region that has recently been liberated from the ISIL control,” Al-Jaberi said.

Also in February, a senior lawmaker disclosed that Iraq’s army has shot down two British planes as they were carrying weapons for the ISIL terrorists in Al-Anbar province.

“The Iraqi Parliament’s National Security and Defense Committee has access to the photos of both planes that are British and have crashed while they were carrying weapons for the ISIL,” al-Zameli said.

He said the Iraqi parliament has asked London for explanations in this regard.

The senior Iraqi legislator further unveiled that the government in Baghdad is receiving daily reports from people and security forces in al-Anbar province on numerous flights by the US-led coalition planes that airdrop weapons and supplies for ISIL in terrorist-held areas.

The Iraqi lawmaker further noted the cause of such western aids to the terrorist group, and explained that the US prefers a chaotic situation in Anbar Province which is near the cities of Karbala and Baghdad as it does not want the ISIL crisis to come to an end.

Also in February, a senior Iraqi provincial official lashed out at the western countries and their regional allies for supporting Takfiri terrorists in Iraq, revealing that US and Israeli-made weapons have been discovered from the areas purged of ISIL terrorists.

“We have discovered weapons made in the US, European countries and Israel from the areas liberated from ISIL’s control in Al-Baqdadi region,” the Al-Ahad news website quoted Head of Al-Anbar Provincial Council Khalaf Tarmouz as saying.

He noted that the weapons made by the European countries and Israel were discovered from the terrorists in the Eastern parts of the city of Ramadi.

Meantime, Head of Iraqi Parliament’s National Security and Defense Committee Hakem al-Zameli also disclosed that the anti-ISIL coalition’s planes have dropped weapons and foodstuff for the ISIL in Salahuddin, Al-Anbar and Diyala provinces.

In January 2015, al-Zameli underlined that the coalition is the main cause of ISIL’s survival in Iraq.

“There are proofs and evidence for the US-led coalition’s military aid to ISIL terrorists through air(dropped cargoes),” he told FNA at the time.

He noted that the members of his committee have already proved that the US planes have dropped advanced weaponry, including anti-aircraft weapons, for the ISIL, and that it has set up an investigation committee to probe into the matter.

“The US drops weapons for the ISIL on the excuse of not knowing about the whereabouts of the ISIL positions and it is trying to distort the reality with its allegations.

He noted that the committee had collected the data and the evidence provided by eyewitnesses, including Iraqi army officers and the popular forces, and said, “These documents are given to the investigation committee … and the necessary measures will be taken to protect the Iraqi airspace.”

Also in January, another senior Iraqi legislator reiterated that the US-led coalition is the main cause of ISIL’s survival in Iraq.

“The international coalition is only an excuse for protecting the ISIL and helping the terrorist group with equipment and weapons,” Jome Divan, who is member of the al-Sadr bloc in the Iraqi parliament, said…the coalition’s support for the ISIL is now evident to everyone, and continued, “The coalition has not targeted ISIL’s main positions in Iraq.”

In Late December 2014, Iraqi Parliamentary Security and Defense Commission MP disclosed that a US plane supplied the ISIL terrorist organization with arms and ammunition in Salahuddin province.

MP Majid al-Gharawi stated that the available information pointed out that US planes are supplying ISIL organization, not only in Salahuddin province, but also other provinces, Iraq TradeLink reported.

He added that the US and the international coalition are “not serious in fighting against the ISIL organization, because they have the technological power to determine the presence of ISIL gunmen and destroy them in one month”.

Gharawi added that “the US is trying to expand the time of the war against the ISIL to get guarantees from the Iraqi government to have its bases in Mosul and Anbar provinces.”