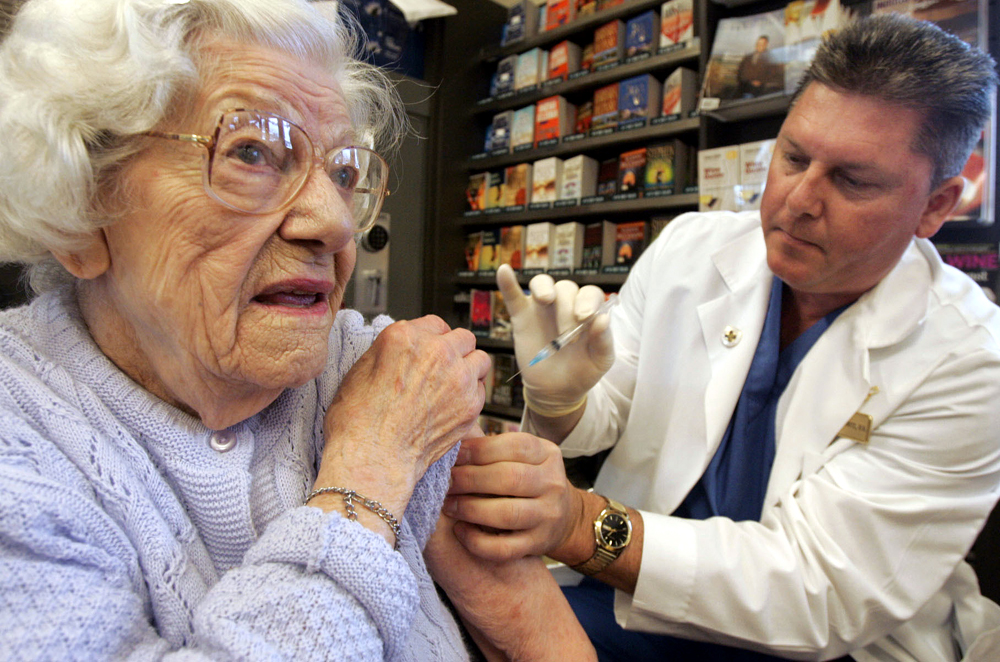 SOTN Editor’s Note:
The preceding headline is quite telling not because 10,000 elderly were awakened in the middle of the night by intrusive robocalls originating from the local healthcare system; rather, that such a practice even exists shows how the pharmaceutical companies have so conscripted the local hospitals to sell their vaccination programs.  And especially the modern snake oil known as flu vaccines.

Isn’t that exactly what the annual flu vaccine is—Snake Oil?

That seniors throughout the USA are now receiving wakeup calls in order to corral them into a pen of vaccine compliance is as oppressive as it is unacceptable.

Of course, the voice at the other end of the phone line is who else but the good local doctor subtly putting the fear into each and every pensioner, specifically that they will be at grave risk should they forego their regular flu shot.

Isn’t that what physicians have become—glorified pharmaceutical salesmen?

Obviously most old folks are simply incapable of understanding that flu vaccines are not only worthless and ineffective, they are also harmful and potentially deadly.

The aged by and large have compromised immune systems, especially those who eat the unhealthy all-American diet and are on a regimen of pharmaceutical drugs.  Hence, when they are exposed to the various toxic ingredients in the flu vaccine many can go into a toxin overload condition.  Should their immune system be overwhelmed, there are an assortment of symptoms and conditions that can result.   Depending on the extent to which their total body burden has been elevated, some can be pushed into an urgent or emergency healthcare event.

The real outrage, which ought to be generated in the wake 3 AM ‘alarm calls’ designed to scare the retirees into receiving their annual flu injection (Isn’t that precisely what it is?), is that most do not know what they are actually getting injected into their bodies.  In other words, informed consent — an integral part of the healthcare delivery process — is not properly occurring as it should.  Many of these folks are simply too incapacitated by a whole host of medical ailments and health challenges to even know how to competently research vaccine truth.

For those who are still becoming familiar with the shocking facts about the super-vaccination agenda the following links are a good place to start.

There are now hundreds of other exposés on the Internet which have completely invalidated the information and data disseminated by the vaccine makers.  Just plug “Vaccine Truth” into your search engine and countless links will be produced which tell the real story.  In many cases these will be true horror stories!

You might also email them to your vaccine-prescribing doctor.  Medical schools conveniently neglect to teach the scientific truth about the many adverse side effects and far-reaching consequences of regular and/or aggressive vaccination schedules.

By Dylan McGuinness
The Patriot Ledger

As many as 10,000 seniors received a strange and early wake-up call Tuesday.
Tufts Health Plan accidentally sent out an automated call reminding patients to get their flu shots this season. The call was intended for 3 to 5 p.m., but instead went out 12 hours early.

“It’s unfortunate that it happened and I would just want to issue a complete apology to all those who received a phone call,” said spokeswoman Sonya Hagopian. “I’m sure it was jarring to be woken up like that and it certainly was not our intent.”

Hagopian said the calls were targeted to those over 65 and enrolled in the Tufts Medicare Preferred HMO option. The flu shot is covered in their plan.

Several clients called the health care provider to ask why the call was made at that time, and Hagopian said the provider would try to reach out to those who were affected by the call.

She said the automated phone reminder is something Tufts uses “very sparingly,” and that another version of the call was carried out without error last week.

“The intent is good, you know, to remind folks to get their flu shots this time of the year. It was just a human error this time,” she said.

Jack Sullivan of Plymouth, senior investigative reporter with Commonwealth Magazine and a former Patriot Ledger editor, was having coffee at about 4:45 a.m. when the phone rang.

He thought it was an emergency, he said.

Instead it was a Tufts doctor with a recorded message.

Sullivan called the company later and the person who answered explained what happened and apologized.

“She asked if I wanted to leave my number so that someone could call me back,” he said. “I told her, no, but can you give me the number of the president so I can give him a call tomorrow morning?”