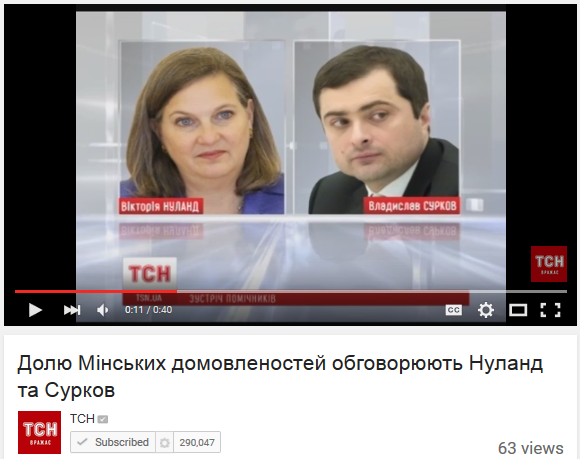 By Scott – The Saker

Since Maidan in Kiev two years ago, American life has become a reality show from the Discovery channel. Every day Americans are discovering something new. For example, this January they discovered that the US stock market is full of hot air, and that the world has turned nervous and angry. Also they have discovered that they have bolshoy (big) problem getting around the Persian Gulf. Which has been, if you think like a true American, their backyard. You see, if you think like an American, the entire world is your backyard and your outhouse.

Remember how in spring 2014, the NATO-backed junta started hunting the Russians in Ukraine, and how people were found hanged on the trees because they were Russian? Remember, how the junta’s tanks moved against civilians in Donbass and people were trying to stop tanks with their bare hands? Russians had called for Europe to stop the spread of fascism in Ukraine. European politicians and its media furiously denied the allegations, and to prove the absence of fascism in Ukraine, massacred hundreds of the Russians in Odessa and Mariupol. It was highly publicized as the heroic fight against “Russian aggression.” Remember?

Among the people who were burned in the Labor Union building in a beautiful port of Odessa were a local poet, a pregnant woman, several children and a teen student of Odessa University, whose mother, a professor of the same university was trying, to no avail, to save him in the midst of murderous crowd bused from Kiev and the Western parts of Ukraine.

Back then Russia promised to take revenge and to turn the life of the masters of our universe, yankees*, into a living hell.
*[According to the Urban Dictionary, “yanky”: American wind sack, worst type of Human on the planet, lives with head inserted completely up his own rectum, there all very stupid…]

We are not psychotic murderers like you, Russia said to the West. We won’t kill your women and children. We will just put the end to your life on this planet as you know it. After we are done, no one, including your Founding Fathers, will be able to recognize you. The West ignored this promise, because the West never listens to what Russians have to say.

On Friday January 15th, 2016 less than 24 hours after the meeting between Sergey Lavrov and John Kerry in Zurich on January 20, 2016 was announced, and just a day before the sanctions on Iran were scheduled to be lifted, a plane carrying Victoria Nuland, an Assistant Secretary of State for European and Eurasian Affairs, took a sudden turn on its way from Vilnius to Berlin and landed on a Russian airbase near Kaliningrad. Earlier Nuland out of blue called Kremlin and urgently demanded that president Putin meet with her personally. Putin refused to see her, but sent his “influential” assistant Surkov to see what she wanted.

Surkov had arrived at Kaliningrad on Thursday January 14th. Nuland’s plane landed on the military base near Kaliningrad on Friday January 15th. Surkov and Nuland had a four hour talk behind closed doors. No one knows what exactly they talked about. The officially released version states that they talked about the implementation of the Minsk II agreement, the changes in Ukraine’s constitution, and the upcoming elections in Donetsk and Lugansk People’s republics.

It’s being reported by some experts from the French AgoraVox who sincerely think that Nuland came to “prevent an inevitable NATO strike on Russia,” and that she came in attempt to “prevent world war.”

According to the witnesses of Nuland’s arrival, she was in and “extremely agitated” state of mind. She was repeating over and over: “War is coming! War is at our gates!” She was also heard saying that Russia “has not fulfilled its promises,” and now “everybody is going to pay for this.”
Also being reported that she has been very agitated recently because Barack Obama is “cleaning” the White House and that she herself might be on a chopping block.

The same day, Friday January 15th at 16:20PM Putin held an emergency briefing session with permanent members of the Security Council in his Novo-Ogaryovo residence.

And what? And nothing…

What had propelled Vikki Nuland, a Washington unelected apparatchik, whose life long efforts are universally understood as being directed towards the destruction of Russia, what propelled her to rush to warn Russia about the alleged imminent NATO strike? Shouldn’t she keep her mouth shut until the happy day of the NATO nukes taking a flight into the country that Nuland hates with so much vigor?

To find an answer to this question we have to go way way back.

The reasons for the US marines to enter tightly guarded waters around Iran’s military base on the Farsi Island were confusingly reported as follows: ” they drifted into Iranian waters, they had veered off course before one of the boats experienced a mechanical breakdown, the Navy lost communication with the boats.”

Two boats with marines were released back into the wild after approximately 15 hours. It said “a post-recovery inventory of the boats found that all weapons, ammunition and communications gear was accounted for, minus two SIM cards apparently removed from two hand-held satellite phones.”

Some people now say that the boats were on a suicide mission, willingly or unwillingly. There are credible reports of an Israeli submarine positioned nearby that was allegedly ready to sink the vessels while in Iranian waters, as a prerequisite for a political fury of sanctions and armed whatnots against Iran over an “attack on the US vessels.”

Had the marines understood what their fate might be we don’t know. However, the Iranians say that the US marines cried while being detained, that’s how scared they were, until they were told that they won’t be killed, tortured, or imprisoned, as they knew the US would have done to Iranians if the situation was somehow reversed.

Somebody must had warned Iranians about this false flag attack. Could it be someone from the US Navy? From NATO? Just like the American diplomat working in Moscow warned about the plot to kill the President of Russia in March 2015. According to the plan Putin was supposed to be killed on a helicopter. Remember, The Economist magazine’s “mysterious” cover for 2015? Putin in black and white and, wearing sunglasses and an orange helicopter in front of him? Orange as in “orange revolution.” Because, as we all know, they are all geniuses over there, and we are just country pumpkins. That was it. Fifth columnists, NGO grant eaters, and other liberal rats were running around the Kremlin with cameras because they were told to watch service helicopters with a promise that something big was about to happen.

An American diplomat reported this plan to the Russia’s authorities and the plan was foiled. Rumor has it, the guy moved to Crimea and got baptized in the Russian Orthodox Church. It’s a beautiful ceremony, I must admit, and to experience it is worth saving the life of a president.

It looks like people everywhere are very alert to the possibility of the psychotic 1% starting a mass slaughter across the globe, and try to fight these plans with everything they’ve got; career, freedom and life notwithstanding.

Upon learning of a plan to use two swift boats as a bait, and to turn the Persian Gulf into a “pearl harbor,” the Russia’s Air Forces, who just happened to be in the neighborhood apparently used their mysterious capacity to turn off the US swift boats’ systems, and allegedly, the Israeli submarine’ systems, also. Boats became deaf, blind and motionless. Exactly like in November 2014 in the Black Sea, the Russian Sukhoi Su -24 with the newest jamming complex paralyzed the most modern American combat management system “Aegis” installed on the destroyer “USS Donald Cook.”

CNN showed this humiliation ( Persian Gulf, not the Black sea one)

As someone rightfully noted, “You haven’t lived until you’re a 22 year old ensign a few months out of NROTC, leading 7 sailors who are all under 21 and 2 chiefs who are about 30 years old. Your small boat breaks in the middle of the Persian Gulf and you can’t see the ship and the radio is broken. And not only that, half the political establishment of your country is hoping to Christ you become a martyr.”

Now, can we understand why the US marines were crying?

And most importantly, we might know what exactly Surkov told to Nuland when she blackmailed him by an “imminent NATO strike.” Known for being as politically correct, subtle and calculating as a guided missile, Surkov could, for all we know, even have used the CNN footage to illustrate his points.

Well, from the Black Sea to island Farci, the US marines have been crying more and more since 2014 when the USS Cook was blinded, deafened and disabled by Russia’s SU. Will Washington ever see their tears and bring them home? Meanwhile, the US military gradually learn that urinating on dead Muslims is not nearly as exhilarating as getting down on your knees in front of alive ones.