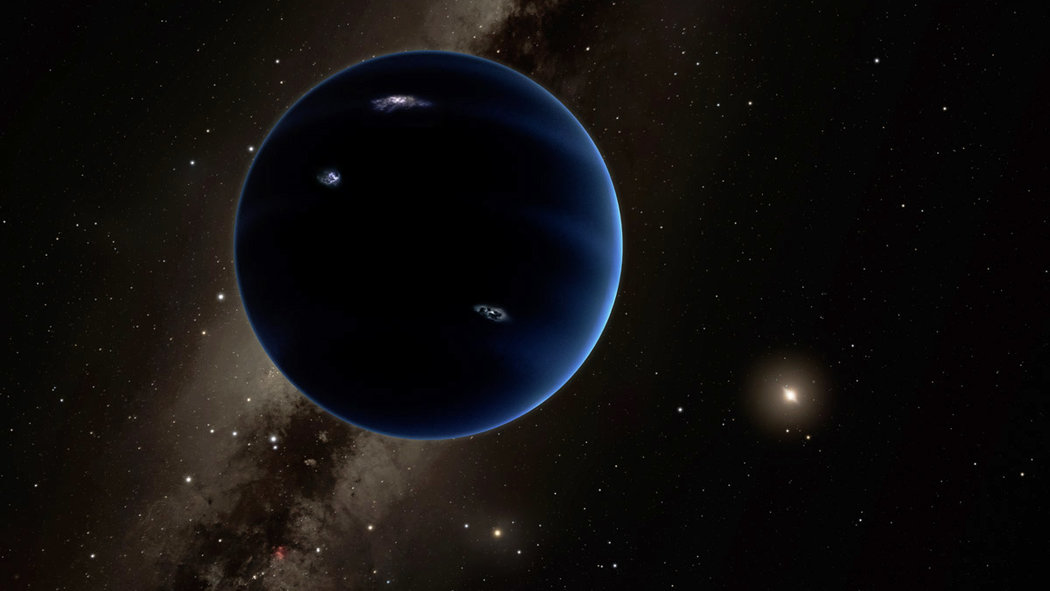 An artist’s impression of a possible ninth planet. It would be quite large — at least as big as Earth — with a thick atmosphere around a rocky core. Credit California Institute of Techonology

There might be a ninth planet in the solar system after all, and it is not Pluto.

Two astronomers reported on Wednesday that they had compelling signs of something bigger and farther away — something that would satisfy the current definition of a planet, where Pluto falls short.

“We are pretty sure there’s one out there,” said Michael E. Brown, a professor of planetary astronomy at the California Institute of Technology.

What Dr. Brown and a fellow Caltech professor, Konstantin Batygin, have not done is actually find that planet, so it would be premature to start revising mnemonics of the planets.

In a paper published in The Astronomical Journal, Dr. Brown and Dr. Batygin laid out a detailed circumstantial argument for the planet’s existence in what astronomers have observed: a half-dozen small bodies in distant elliptical orbits.

What is striking, the scientists said, is that the orbits of all six loop outward in the same quadrant of the solar system and are tilted at about the same angle. The odds of that happening by chance are about 1 in 14,000, Dr. Batygin said.

A ninth planet could be gravitationally herding them into these orbits.

For the calculations to work, the planet would be at least an equal to Earth, and most likely much bigger — perhaps a mini-Neptune, with a small but thick atmosphere surrounding a rocky core and mass about 10 times that of Earth. That would be 4,500 times the mass of Pluto.

“We have pretty good constraints on its orbit,” Dr. Brown said. “What we don’t know is where it is in its orbit, which is too bad.”

Alessandro Morbidelli of the Côte d’Azur Observatory in France, an expert in dynamics of the solar system, said he was convinced. “I think the chase is now on to find this planet,” he said.

This would be the second time that Dr. Brown has upended the map of the solar system. In January 2005, he discovered a Pluto-size object, now known as Eris, in the Kuiper belt, the ring of icy debris beyond Neptune.

The next year, the International Astronomical Union placed Pluto in a new category, “dwarf planet,” because in its view, a full-fledged planet must be the gravitational bully of its orbit, and Pluto was not.

Thus, they were surprised when Dr. Brown and two colleagues spotted a 600-mile-wide icy world at a distance of eight billion miles that remained well outside the Kuiper belt even at the closest point in its orbit.

No one could convincingly explain how the object, which Dr. Brown named Sedna, got there, and the hope was that the discovery of more Sedna-like worlds would provide enlightening clues.

Instead, astronomers looked and found nothing, deepening the mystery.

Finally, in 2014, Chadwick Trujillo, who had worked with Dr. Brown on the Sedna discovery, and Scott S. Sheppard, an astronomer at the Carnegie Institution for Science in Washington, reported a smaller object in a Sedna-like orbit, always remaining beyond the Kuiper belt.

Dr. Trujillo and Dr. Sheppard noted that several Kuiper belt objects had similar orbital characteristics, and they laid out the possibility of a planet disturbing the orbits of these objects. “It was the best explanation we could come up with,” Dr. Trujillo said.

But the particulars of their proposed planet did not explain what was in the sky, Dr. Brown said.

Still, the peculiarities of the orbits appeared genuine. Dr. Brown said he and Dr. Batygin “sat down and beat our heads against the wall for the last two years.”

First, they focused on the six objects in stable orbits and disregarded others that had been recently flung out by Neptune.

That made the picture clearer.

“They all point into the same overall direction,” Dr. Batygin said. “This is in stark contrast with the rest of the Kuiper belt.”

Besides the long odds of this alignment being coincidental, Dr. Batygin said, this pattern would disperse over time.

That argued for the force of some unseen body guiding Sedna and the others.

Dr. Batygin, a theorist, tried placing a planet among them using computer simulations, which scattered some Kuiper belt objects, but the orbits were not sufficiently eccentric.

Then he examined what would happen if a ninth planet were looping outward in the opposite direction. That, Dr. Batygin said, gave “a beautiful match to the real data.”

Another strange result in the simulations: A few Kuiper belt objects were knocked into orbits perpendicular to those of the planets. Dr. Brown remembered that five objects had been found in perpendicular orbits.

“They’re exactly where we predicted them to be,” he said. “That’s when my jaw hit my floor. I think this is actually right.”

Dr. Morbidelli said a possible ninth planet could be the core of a gas giant that started forming during the infancy of the solar system; a close pass to Jupiter could have ejected it. Back then, the sun resided in a dense cluster of stars, and the gravitational jostling could have prevented the planet from escaping to interstellar space.

Dr. Brown said that he had begun searching for the planet, and that he thought he would be able to find it within five years. Other astronomers will most likely also scan that swath of the night sky.

If the planet exists, it would easily meet the definition of planet, Dr. Brown said.

“There are some truly dominant bodies in the solar system, and they are pushing around everything else,” Dr. Brown said. “This is what we mean when we say planet.”

Correction: January 20, 2016
An earlier version of an animation accompanying this article carried an incorrect credit. It was made by Michael E. Brown, not Michael E. Clark.
A version of this article appears in print on January 21, 2016, on page A1 of the New York edition with the headline: There May Be a Ninth Planet (Not You, Pluto). Order Reprints|