Dow has worst four-day start to a year on record 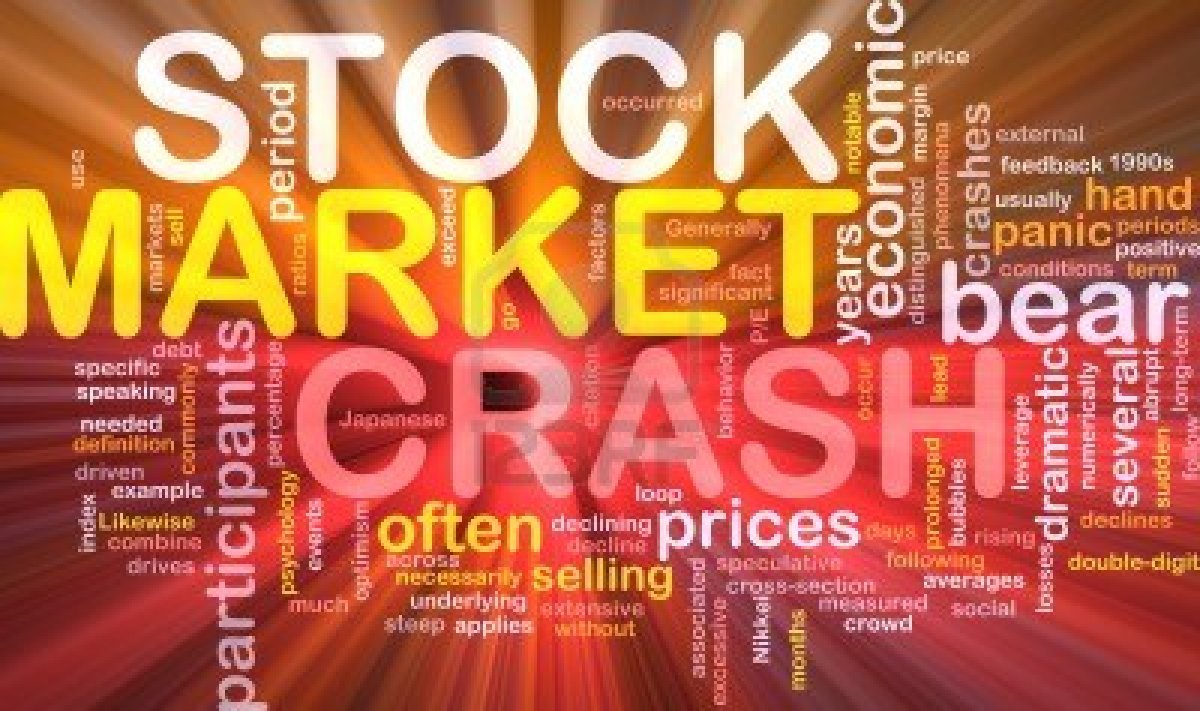 The Dow Jones Industrial Average (DJIA) has dropped a total of 1090 points since Thursday, December 31, 2015.  The following chart shows the day-to-day declines which have brought the DJIA to the present level of 16,514. 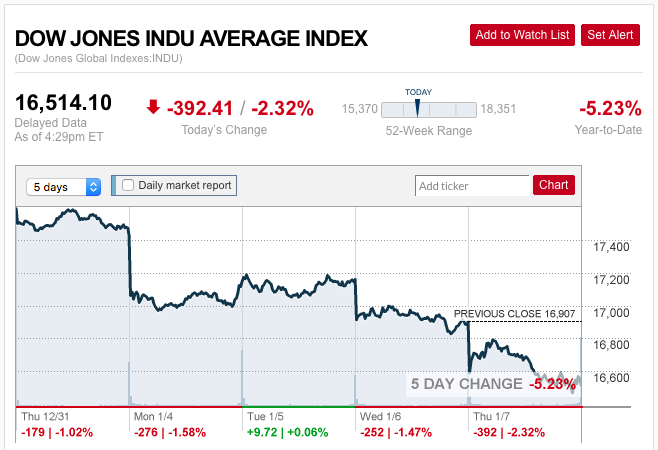 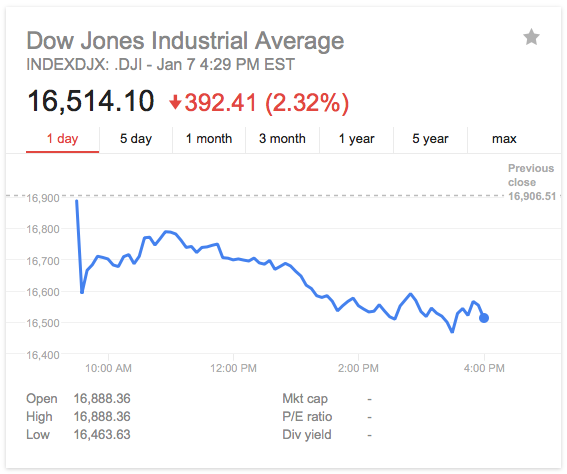 Where is all of this going to end up?

Given that the Federal Reserve has increased the prime rate for the first time since 2006, it is quite likely that the U.S. economy has yet to process that anticipated but unwanted interest rate change that occurred on December 16.

There are many other critical factors which are weighing heavily on this deteriorating situation including the plunging price of oil.  All the oil-driven economies of the world are under serious threat to include Russia, Saudi Arabia, Venezuela, Iraq, Kuwait and the USA. The move away from the U.S. dollar by various nations has greatly contributed to the instability of the currency markets.  Likewise, the commodities markets are all under duress because of manufacturing slowdown around the globe.

The markets survived much more than expected in 2015 and are therefore set to experience a major correction in 2016.  Because of the pervasive and profound market manipulation since the September crash of 2008, investments are priced artificially high across the board.  None of the bitter medicine was ever taken, which was necessary to fix the markets both structurally and systemically since the last recession.  Hence, radical intervention will now be required.

Dow has worst four-day start to a year on record

The global market freakout of 2016 just got worse.

The latest scare came on Thursday as China’s stock market crashed 7% overnight and crude oil plummeted to the lowest level in more than 12 years.

The wave of selling has knocked the Dow down 911 points, or more than 5% so far this year. That’s the worst four-day percentage loss to start a year on record, according to FactSet stats that go back to 1897. The Nasdaq, down over 6% in 2016, is off to its bleakest start since 2000.

Both the Dow and Nasdaq officially closed on Thursday in a “correction,” signaling the first 10% drop from previous highs since last summer.

Most of the blame goes to China, which is believed to be the biggest threat to U.S. stocks this year.

China’s stock market is in complete disarray. For the second time in four days, trading was suspended under new circuit breaker rules unveiled this week. Many observers believe the circuit breakers, which are aimed at easing volatility, are actually creating more chaos by causing investors to sell out of fear they won’t be able to get their money out before trading is stopped.

The good news is that China held an emergency meeting on Thursday and decided to suspend the circuit breakers effective Friday.

Peter Boockvar, chief market analyst at The Lindsey Group, said the move could take some short-term pressure on Chinese stocks but won’t be a cure-all.

“People now don’t have that same deadline to sell…but China’s stock market is going to go where it’s going to go,” said Boockvar.

Investors are also alarmed by the decline in China’s currency. The country’s central bank set the yuan’s value at the weakest level since March 2011. The currency devaluation may help boost growth, but it can hurt asset values and cause money to exit the country.

To that point, China’s central bank said it burned through a record $108 billion in foreign-exchange reserves in December in an effort to slow the sharp devaluation of its currency.

While investors should focus on China’s economy, not its turbulent equity market, the economy isn’t looking great either. New reports released this week reinforce concerns that China is slowing down more than investors realized.

As if China’s crash wasn’t enough, crude oil continues to nosedive. Crude plunged as much as 4% to $32.10 a barrel, the lowest level since late 2003.

That’s a great thing for consumers because it’s going to send gasoline prices even lower. But it worries investors because cheap oil crushes profits for energy companies. Even though oil’s plunge has been mostly driven by oversupply, cheap oil also raises concerns it’s signaling something alarming about poor demand due to slower global growth.

Against this backdrop, stocks in Europe fell more than 2%, while Hong Kong equities plunged 3%.

In a sign of the concern among investors, gold jumped another 1.5% to $1,108 an ounce. Gold, already up 4% this year, tends to rally when fear is on the rise.

CNNMoney’s Fear & Greed Index, which is calculated based on several market indicators, is also flashing “fear.” Just a week ago it was in “neutral” territory.

All of this has raised fears among some like billionaire George Soros that this could be a repeat of the 2008 financial crisis. Others think stocks will rebound from the China fears, which is exactly what happened last summer.

“I think this too shall pass. One of these days we’ll get a panic that’s really justified by the fundamentals of a global recession. I don’t think that’s the case on this one,” said Yardeni.