TMR Editor’s Note:
Thanks to Karin Westdyk and Sara Shannon (author of Radiation Protective Foods), the legacy of anti-nuclear activist Larry Bogart has been preserved for posterity.   Just who was Larry Bogart?

Larry Bogart (1914–1991) was a U.S. independent critic of the nuclear power industry. Bogart abandoned a career in public relations in the mid-1960s to organize community groups and speak out about the problems of the “peaceful atom”.[1][2]

In 1966, Bogart founded the Citizens Energy Council, a coalition of environmental groups that published the newsletters “Radiation Perils,” “Watch on the A.E.C.” and “Nuclear Opponents”. These publications argued that “nuclear power plants were too complex, too expensive and so inherently unsafe they would one day prove to be a financial disaster and a health hazard,” The Larry Bogart Archives are located at the Thomas J. Dodd Research Center, University of Connecticut and consist of correspondence, administrative records, press releases, news clippings, fliers, legal documents, scientific reports, government reports, newsletters, periodicals, typescripts, interviews, maps, books, audio recordings and photographs. The bulk of the collection dates from 1966 to 1986. The collection chronicles the extent of information available on nuclear energy as it was being published and circulated in local newspapers, government reports, books by American and European publishers, popular periodicals, the alternative press, and by individuals. (Source: Larry Bogart)

In fact it was Karin Westdyk who housed much of this material for many years until the UCONN facility volunteered to provide a new repository in their Libraries Archives & Special Collections area of the Thomas J. Dodd Research Center.  The University of Connecticut has provided a safe and secure haven ever since.  Many environmental activists and health advocates now have access to a treasure trove of material related to Bogart’s much-needed advocacy .

Clearly, Larry Bogart served a prophetic role by pulling the alarm on the future of nuclear power generation.  He saw the inherent dangers involved with technology and equipment.  He also saw that the Nuclear Power Industry was obviously unsustainable.  Hence, the only way that it would be affordable was for the nuclear power plants to shirk necessary maintenance as well as urgent upgrades to more sound engineering.

In short, Larry Bogart correctly perceived that every nuclear reactor was an accident waiting to happen.  His aim was to warn enough reasonable people so that future nuclear disasters could be averted.  The world is in dire need of more Larry Bogarts. 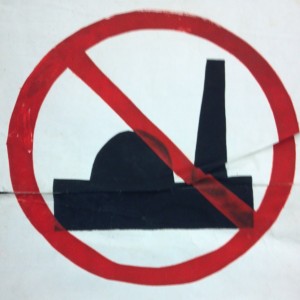 During a long career of anti-nuclear power advocacy, from the late 1950s to the early 1990s, Larry Bogart—and his associates after him—gathered together and distributed an enormous collection of information on the hazards of nuclear power.  Today the archive serves as a chronicle of the struggle against nuclear power and its grass roots origins. The collection is comprised of 42 boxes, amounting to approximately 54 linear feet, and covers approximately 50 years of time, spanning even after Larry Bogart’s death in 1991. In its extent it is more than a life’s work, and now, after a period of about three months of careful work, I am glad to report is completely inventoried!

The collection is comprised of anti-nuclear power publications from many different nationwide organizations—including his own, such as Nuclear Opponents and Energy News Digest—which show his concern for the nationwide problem, rather than merely local concerns. As can be surmised from the vast quantity of newspaper clippings, though, he devoted much attention to stopping power plants in the Northeast, such as Indian Point in New York, Vermont Yankee, and Seabrook in New Hampshire. His correspondence, though rarer, further indicates a deep devotion to the fight against nuclear power—since it is very nearly the only subject discussed—and correspondence written to him at his various organizations such as the Citizens Energy Council, Friends of the Hudson and the Anti-Pollution League—often requests for information or subscriptions to publications—shows his great importance within this advocacy movement.

The Larry Bogart Papers, rather than a direct biography of Larry Bogart, provides students and researchers with ample source materials for studying the movement as well as the specific concerns of scientists and citizens in the early era of nuclear power. Larry Bogart brought countless clippings and publications into one place from people and organizations from around the world, giving us a collection with a very wide scope.  What the collection offers is greater than one person could have produced singlehandedly: a chronicle of fifty years of anti-nuclear advocacy, told in many voices.