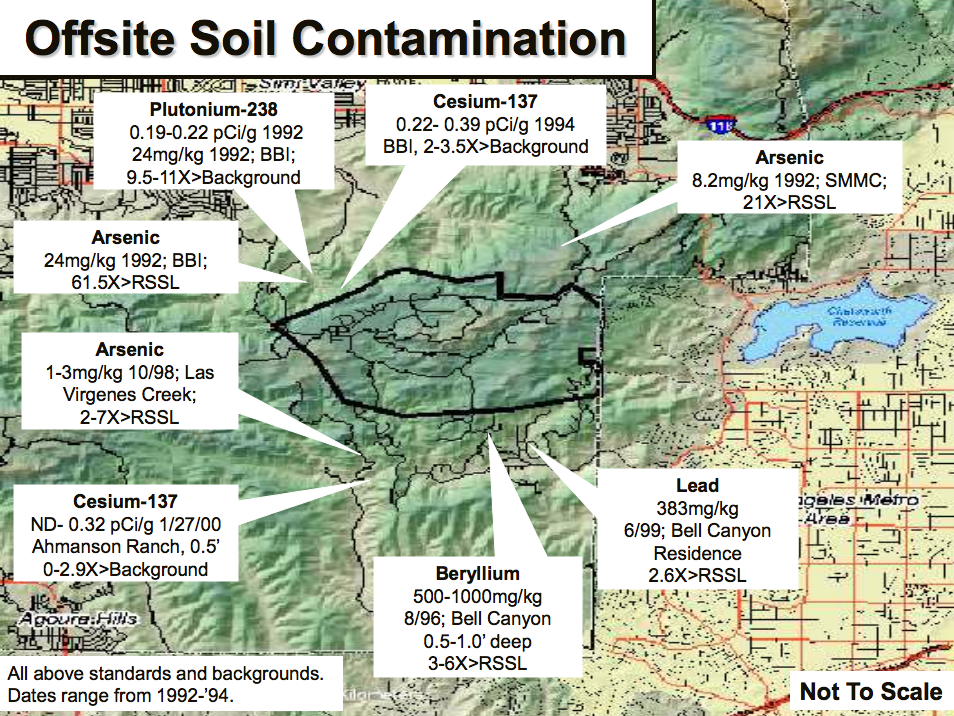 The Santa Susana Field Laboratory site, shown in a 2000 photo, is one of the most challenging cleanup jobs in the state, possibly the country. (Boeing)

Any way you cut it, the situation at the Santa Susana Field Laboratory site outside Simi Valley is a mess.

The 2,850-acre former rocket engine test center is contaminated by a vast menu of radioactive isotopes and toxic chemicals. The condition of its soil, groundwater and structures makes it one of the most challenging cleanup jobs in the state, possibly the country.

Until 2006, the site was operated by private corporations for federal agencies — chiefly NASA. The problems there began in 1959, when a nuclear reactor partially melted down, contaminating portions of the hilltop facility and spewing radioactive gases into the atmosphere. That incident wasn’t publicly disclosed until 1979. By then, more mishaps had followed, including reactor accidents in 1964 and 1969. The worst contamination is thought to be in a parcel known as Area IV, where the meltdown occurred.

Santa Susana is a mess from a regulatory standpoint too. Boeing Co. acquired the property in 1996, when it absorbed Rockwell International‘s aerospace and defense businesses, and today shares responsibility for the cleanup with NASA and the U.S. Department of Energy. The company in 2007 signed an agreement with the state to clean the site to a high standard. Three years later, the federal agencies agreed to restore much of the property by mid-2017 to “background” standards — that is, the removal of all contaminants as if the facility had never operated.

The state took other steps to ensure a full cleanup. A 2007 law mandated tough standards for the work. In 2009, Linda Adams, then the director of the California Environmental Protection Agency, rejected an offer to list Santa Susana as a federal Superfund cleanup site because the federal standards didn’t meet the state’s requirements. She feared that contaminated runoff could harm surrounding farmland and residential communities.

We know that stuff doesn’t stay on the mountain, so that’s why I felt a higher standard was warranted.– Linda Adams, former director of the California Environmental Protection Agency

“We know that stuff doesn’t stay on the mountain,” Adams told me last week, “so that’s why I felt a higher standard was warranted.”

But the cleanup effort, which could cost hundreds of millions of dollars, has been tied up in litigation and political maneuvering in Sacramento almost from the start. “It was an uphill battle,” Adams says, “and that’s putting it mildly.”

In 2009, Boeing successfully sued in federal court to overturn the 2007 law, which it asserted imposed “uniquely onerous cleanup rules that apply nowhere else in California.” The state’s appeal is pending.

The company has mustered an impressive platoon of high-level lobbyists to press state lawmakers for approval of a less extensive cleanup. Many of its representatives have old ties to the state Department of Toxic Substances Control or the top echelons of state government, as documented by the consumer group ConsumerWatchdog.

“If someone doesn’t want to clean up something, they go to Sacramento and cry and weep and moan,” says Philip Chandler, a veteran DTSC official who was removed from oversight of Santa Susana — after antagonizing Boeing — in 1999. “We call the companies our ‘customers,’ but it’s the public we’re supposed to be working for.”

What’s oddest about the cleanup saga, environmental activists say, is that the toughest oversight came under pro-business Gov. Arnold Schwarzenegger, and the most backing down has occurred under Jerry Brown, his ostensibly progressive successor.

“I’m dismayed over how much has been undone in just a few years,” says Daniel O. Hirsch, a lecturer on nuclear policy at UC Santa Cruz who has been pushing for a full Santa Susana cleanup. “The likelihood is that the community will get very little cleanup at all.”

This would not be a unique turnaround on environmental issues for Brown, who made his reputation as an environmental advocate in his first terms through acts such as opposing construction of the Diablo Canyon nuclear plant. More recently, he has proposed rolling back the California Environmental Quality Act, the state’s landmark environmental law, in the name of economic development. Many in the environmental community also are frustrated by his position on fracking — he signed a 2013 measure regulating the practice, but its disclosure and permitting rules have been derided as toothless, and he has opposed a fracking moratorium endorsed by the state Democratic Party.

DTSC officials say they are committed to a thorough cleanup at Santa Susana, and that Boeing and the federal agencies will be held to their agreements. When final cleanup standards are proposed, probably in 2016, “the decision will be a public one, open to public dialogue,” promises Raymond Leclerc, division chief of the cleanup program at DTSC. But uncertainty exists about the extent and time frame of the cleanup.

The key issue is: How clean is clean? That turns on the definition of “background” standards. Boeing’s position is that the 2007 agreement requires it to restore the site to “a level clean enough to allow suburban residential housing — a far more stringent level than is required for the actual future land use as protected open space.”

But “suburban residential standards” and those applicable to open space actually allow much higher concentrations of hazardous materials than the “background” levels required by the 2010 agreements with the federal government. That would be especially worrisome in the case of cancer-causing nuclides such as strontium-90 and cesium-137, which are products of nuclear reactions like those performed at Santa Susana.

Leclerc says DTSC is still hoping to finish the cleanup by mid-2017, but given the pace of preparatory work and the legal issues still percolating through the courts, that seems unlikely. In the meantime, nearly 400,000 residents live in communities within seven miles of the contaminated facility, including Chatsworth, Thousand Oaks, Canoga Park and Simi Valley.

Some of those residents may be at risk of higher rates of cancer. Some epidemiological findings have been equivocal, but a study published in 2007 by researchers at the University of Michigan found the incidence rate of certain cancers, including thyroid, bladder and blood system cancers, to be more than 60% higher for residents living within two miles of the site in 1988-95 than for those more than five miles away. The researchers didn’t tie the illness rates directly to the testing lab, but they observed that the cancers with high incidence rates “have been linked in previous studies with hazardous substances used” at the site.

The state regulators’ performance is a window into how the Department of Toxic Substances Control, a unit of the California Environmental Protection Agency, handles other cases of contamination. The record is unimpressive. Just last month, the DTSCapproved the expansion of a huge hazardous waste facility near the Central Valley community of Kettleman City despite the dump’s lengthy history of environmental violations and the community’s concerns that it’s responsible for birth defects and deaths among children.

The agency also has come under fire for allowing the Exide battery recycling plant in Vernon to operate on a “temporary” permit for 30 years, during which it assembled a sheaf of citations for lead and arsenic emissions. Last March, health officials advised nearby residents to keep their children from playing in bare soil.

The most important test posed by Santa Susana is whether the government will maintain rigorous standards in the face of corporate lobbying and regulatory inertia.

Under Arnold Schwarzenegger, California put its foot down on Santa Susana: Clean it up as though it was never there. Jerry Brown needs to make sure that commitment is honored.