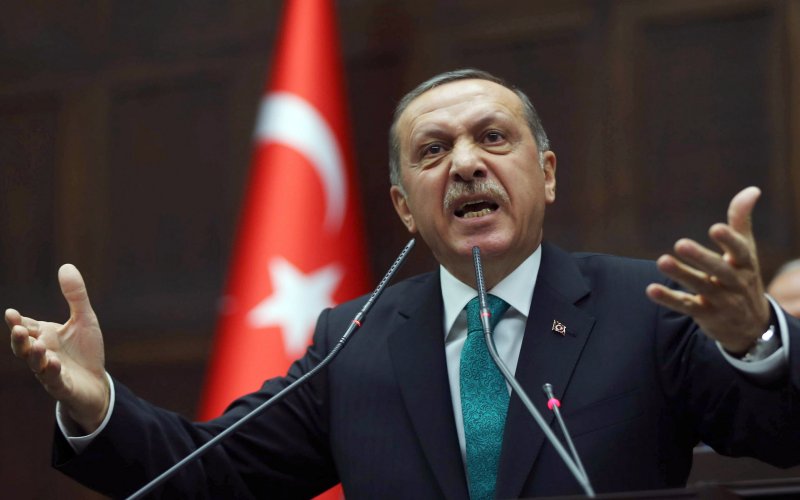 Following June elections in which AKP lost its absolute parliamentary majority thanks in part to a stronger than expected showing at the polls by the pro-Kurdish HDP, Turkish President Recip Tayyip Erdogan began to lose his mind.

The vote put in jeopardy Erdogan’s bid to effectively rewrite the country’s constitution on the way to consolidating his power in an executive presidency. That decisively undesirable outcome could not stand and so Erdogan did what any respectable autocrat would do: he nullified the election. First, the President undermined the coalition building process so he could call for new elections. Next, he fanned the flames of civil war and reignited a long-simmering conflict with the PKK. The idea was to scare the electorate into believing that a “strong” AKP government was the only antidote to domestic and international terror. Finally, Erdogan cracked down on the press and anyone else critical of his rule. AKP was also suspected of covertly backing attacks on HDP offices and newspapers. Some (i.e. the PKK) went so far as to suggest that Erdogan secretly worked with Sunni extremists to orchestrate suicide bombings – in other words, there’s speculation Erdogan terrorized his own people.

Sure enough, AKP had a better showing at re-do elections last month, but by that point, Erdogan was on the fast track to dictatorial delirium. On November 24, he shot down a Russian fighter jet near the border with Syria in the first such direct military confrontation between Russia and a NATO member in at least six decades. And the madness didn’t stop there. After Putin and the Russian MoD laid out their case against Ankara’s role in financing Islamic State via Turkey’s complicity in the group’s lucrative oil trafficking business, Turkey sent hundreds of troops and around two dozen tanks to Bashiqa in Iraq which is right on the crude smuggling route. The deployment infuriated Baghdad and after Turkey refused to pull the troops out, Iraq went to the UN Security Council. Subsequently, Turkish troops were “attacked” by Islamic State.

The Turks claim that Iraq invited them in the past, a contention Baghdad vehemently denies. Thanks to Barzani and the Kurds, Ankara gets to claim that at least someone welcomes the Turkish troop presence (remember, despite Erdogan’s hatred of the PKK and the YPG, Turkey is friendly with Erbil, which relies on Turkey to get some 630,000 b/d of what is technically illegal crude to market).

Well, for anyone who thought Turkey might be set to bow to international pressure by moving its troops north and thus back towards the Turkey-Iraq border, think again because on Saturday, Turkish PM Ahmet Davutoglu was out with a series of declarations that seem to suggest Turkey is going full-belligerent-retard as Erdogan scrambles to preserve the “Assad must go” narrative on the way to securing whatever Ankara’s interests are in both Iraq and Syria.

First, Davutoglu said that the provision of training to the Peshmerga and Mosul militiamen is “in line with a request from Iraq authorities and as such, the mission in Iraq will continue “until Mosul is freed” from ISIS.

Ok, so two things there. The deployment is not “in line with a request from Iraq.” At this point, Turkey’s position has moved from comically absurd to maddeningly obstinate. How many times does Baghdad have to say that Turkey isn’t invited before NATO forces Turkey to drop the “they told us we could be here” line? Further, the idea that Turkey will stay until Mosul “is liberated” from ISIS, means Erdogan plans to remain in Iraq indefinitely. As we’ve documented on several occasions, an operation to retake Mosul is for all intents and purposes a pipe dream and if Turkey intends to wait it out, the troops and tanks could be there for years.

Next, Davutoglu claims that the Islamic State attacks on Turkish positions in Bashiqa prove Turkey “is right.” “Right” about what, it’s not clear, but what’s interesting is that the attacks came just as ISIS launched its first major offensive in northern Iraq since July in a move that US officials say was likely designed to disrupt preparations for an assault on Mosul. The point: all of this is rather conveniently timed.

Davutoglu then slammed a UN Security Council resolution agreed in New York on Friday. The meeting of foreign ministers was tipped by John Kerry in Moscow on Tuesday and when discussions ended, diplomats adopted a resolution which purports to draw a road map for ending the war in Syria. As WSJ notes, the resolution “left unresolved divisions among world powers on key issues in the conflict.”

Which “key issues”, you ask? Well, the only ones that matter – namely, i) the fate of Bashar al-Assad and ii) which groups should be recognized as “terrorists” and which should be awarded the “moderate opposition” badge.

“Both issues were left out of the resolution after an hourslong meeting of foreign ministers in New York on Friday failed to reach a compromise and at one point verged on collapse,” WSJ goes on the recount, adding that “Russian and Iranian diplomats said the question of Mr. Assad wasn’t discussed on Friday because neither of their countries would accept a deal that calls for Mr. Assad’s exit, even at the end of a political transition period.”

As we’ve said on too many occasions to count, Syria is absolutely critical for Tehran when it comes to preserving Iranian influence and ensuring that the so-called “Shiite crescent” doesn’t wane. For Russia, this is a chance to supplant the US as Mid-East superpower puppet master and Moscow isn’t about to see it slip away by agreeing to a resolution that makes Assad’s ouster a foregone conclusion.

For Turkey, the absence of a decision on Assad’s future is maddening. The Security Council resolution“lacks realistic perspective,” Davutoglu said on Saturday, before adding that the “Syria crisis can only be solved if Bashar al-Assad leaves power.”

Consider that, and consider the fact that, as we reported yesterday, Ankara is now establishing a military base in Qatar in order that the two country’s might work more closely on tackling “common enemies.”

What we’re beginning to see here is the formation of three alliances in the Mid-East: 1) Russia, Iran, Syria, and Iraq; 2) Turkey, Saudi Arabia, and Qatar; 3) Britain, France, and Germany. The first alliance is pro-Assad, anti-terror. The second is anti-Assad, pro-Sunni extremist. The third is anti-Assad (although less vehemently so), anti-terror (conspiracy theories aside). Note that we’ve left the US out. Why? Because Washington is now stuck. The US wants desperately to maintain coordination with Ankara, Riyadh, and Doha, but between stepped up media coverage of Saudi Arabia’s role in underwriting extremism (via the promotion of Wahhabism) and hightened scrutiny on Erdogan’s role in financing terrorists, the position is becoming increasingly untenable. But aligning solely with the UK, France, and Germany entails adopting a more conciliatory approach to Assad – just ask Berlin which, as we reported on Friday, is now working with Assad’s intelligence police and may soon establish a base in Damascus.

With that in mind, we’ll close with the following from Obama, which underscores the extent to which the US is now thoroughly confused as to what to do next:

“Now, is there a way of us constructing a bridge, creating a political transition, that allows those who are allied with Assad right now, allows the Russians, allows the Iranians to ensure that their equities are respected, that minorities like the Alawites are not crushed or retribution is not the order of the day? I think that’s going to be very important as well.”