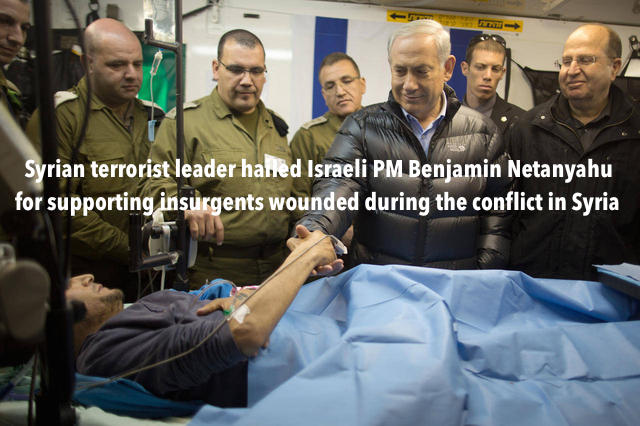 The Jerusalem Post reports that an ISIS fighter says that Turkey funds the terrorist group. Turkey is a member of NATO and a close U.S. ally.

A German news program – with English subtitles captions – shows that Turkey is sending terrorists into Syria:

Opposition Turkish lawmakers say that the government is protecting and cooperating with ISIS and Al Qaeda terrorists, and providing free medical care to their leaders.

According to a leading Turkish newspaper (Today’s Zaman), Turkish nurses are sick of providing freemedical treatment to ISIS terrorists in Turkish hospitals.

According to Pulitzer-prize winning reporter Seymour Hersh and leaked phone calls between top Turkish officials, Turkey also carried out the chemical weapons attack which has been blamed on Assad, and has planned other “false flag attacks” within Turkey.

Foreign Policy documents that Israel is also treating ISIS terrorists for free in its hospitals:

Israel is  …  providing medical care and other unidentified supplies to the insurgents ….

In the past three months, battle-hardened Syrian rebels have transported scores of wounded Syrians across a cease-fire line that has separated Israel from Syria since 1974, according to a 15-page report by U.N. Secretary-General Ban Ki-moon on the work of the U.N. Disengagement Observer Force (UNDOF). Once in Israel, they receive medical treatment in a field clinic before being sent back to Syria, where, presumably, some will return to carry on the fight.

U.N. blue helmets responsible for monitoring the decades-old cease-fire report observing armed opposition groups “transferring 89 wounded persons” from Syrian territory into Israel, where they were received by members of the Israel Defense Forces, according to the report. The IDF returned 21 Syrians to armed opposition members back in Syria, including the bodies of two who died.

“Throughout the reporting period, UNDOF frequently observed armed members of the opposition interacting with the IDF across the cease-fire line,” according to the report. “On one occasion UNDOF observed the IDF on the Alpha side [inside Israel] handing over two boxes to armed opposition on the Bravo side [inside Syria].”

The Israeli government has been providing medical assistance to Syria’s wounded for more than a year. In February, Prime Minister Benjamin Netanyahu paid a visit to a military field hospital in the Golan Heights A Free Syrian Army commander, arrested last month by the Islamist militia Al-Nusra Front, told his captors he collaborated with Israel in return for medical and military support, in a video released this week.

In a video uploaded to YouTube Monday … Sharif As-Safouri, the commander of the Free Syrian Army’s Al-Haramein Battalion, admitted to having entered Israel five times to meet with Israeli officers who later provided him with Soviet anti-tank weapons and light arms. Safouri was abducted by the al-Qaeda-affiliated Al-Nusra Front in the Quneitra area, near the Israeli border, on July 22.

“The [opposition] factions would receive support and send the injured in [to Israel] on condition that the Israeli fence area is secured. No person was allowed to come near the fence without prior coordination with Israel authorities,” Safouri said in the video.

In the edited confession video, in which Safouri seems physically unharmed, he says that at first he met with an Israeli officer named Ashraf at the border and was given an Israeli cellular phone. He later met with another officer named Younis and with the two men’s commander, Abu Daoud. In total, Safouri said he entered Israel five times for meetings that took place in Tiberias.

Following the meetings, Israel began providing Safouri and his men with “basic medical support and clothes” as well as weapons, which included 30 Russian [rifles], 10 RPG launchers with 47 rockets, and 48,000 5.56 millimeter bullets.

The Syrian opposition is willing to give up claims to the Golan Heights in return for cash and Israeli military aid against President Bashar Assad, a top opposition official told Al Arab newspaper, according to a report in Al Alam.

The Western-backed militant groups want Israel to enforce a no-fly zone over parts of southern Syria to protect rebel bases from air strikes by Assad’s forces, according to the report.

Other close U.S. allies – including Saudi Arabia, Kuwait and Qatar back ISIS – back the ISIS terrorists as well.

What’s really happening?  It’s all about pushing for regime change in Syria … AGAIN.