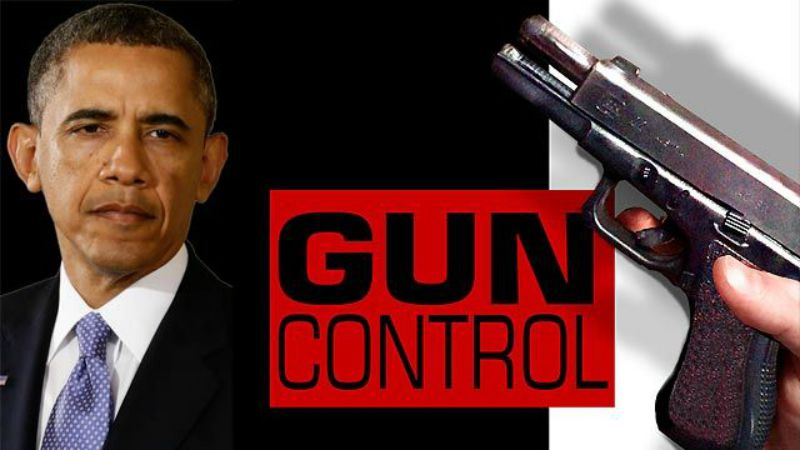 Obama Was Carefully Chosen
To Take Away America’s Guns

One Year Remaining To Do The Dirty Deed There ought to be no mistake about it: Barack Hussein Obama was purposely selected and installed by the World Shadow Government (WSG) to unlawfully nullify the Second Amendment.

Obama was educated and trained throughout his lifetime in such a way that he would be sufficiently, though wrongfully, convicted with the notion that guns can be removed from American society by Executive Order and other surreptitious means.

As a thoroughly lawless president, Obama has demonstrated that the United States Constitution means nothing to him.  As a supposed constitutional law college instructor, he has shown no respect for, and has only trampled on, the U.S. Constitution especially on the Bill of Rights.

Obama has gone out of his way and taken every available opportunity to illegally increase the executive powers of the presidency.  His issuance of executive orders (EO) concerning the most weighty and consequential matters of state has changed the nation in profound and fundamental ways.  Obama’s 23 Executive Orders on gun control are especially worrisome. Obama was set up and mind-controlled since birth

There is a very good reason why the current POTUS not only lacks a legitimate birth certificate, but that he also posted a copy of a forged and fraudulent copy of fake and fabricated COLB (Certificate Of Live Birth) on the official Whitehouse.gov website.  Although he is now guilty of a number of serious felonies in the conduct of such a transparent fraud perpetrated against the American people, he knows that his masters will not allow such a prosecution of those crimes to take place.

Why?  Because the entire birth certificate (BC) scandal was quite deliberately planned in order to keep Obama on a short leash.  The engineered BC ‘fiasco’ also allows his handlers to compel any presidential initiative they so desire.  In this manner, should Obama ever balk at any order(s) that he is given, the imminent threat of his true BC status looms large.  In other words he can be coerced and blackmailed to perform virtually any unconstitutional act or presidential misdeed demanded by his real masters.  And so he has!

This is the actual predicament that the United States of America now finds itself in.

This sitting president — who actually presides in name only — can be manipulated and pressured to do just about anything that the WSG demands of him.  The whole world has watched in horror as this imposter has destroyed America and its standing in the international community.  Simply put, Obama was chosen to accomplish a number of critical objectives of which absolute gun control is one; in fact, it is the central and most important goal of all. The spate of gun violence across the country has been fastidiously designed and executed in order to systematically soften up the American people.  According to their furtive plans it is the people who will eventually demand gun control measures.  The dramatic uptick in the number and intensity of school massacres and mall shootings, church slaughters and family slayings, company mass murders and high-profile assassinations — all by way of guns — has been covertly contrived and coordinated to provide Obama with the pretext to strip Americans of their guaranteed 2nd Amendment right to gun ownership.

Obama’s #1 MISSION: Take Away The Guns

Because of the current predicament, which has been meticulously manufactured nationwide, Obama will go after legitimate gun possession wherever, whenever and however he can.  He has already done this incrementally through a series of executive orders which have been quietly signed.  However, the time is VERY short and the incremental approach will no longer suffice.  Hence, there will likely be a ramping up of fabricated gun violence in order to further traumatize the American people.

In view of this WSG dictate, which he must accomplish during his last year in office, the possibility of a 9/11 type mass murder by gun violence is now exceedingly high.  This may transpire by way of a single shocking event, or a series of events, each one timed to deliver greater trauma to the U.S. citizenry.

The American people should not underestimate the capacity for the Obama Administration to knowingly and willingly deceive and harm the populace.  There is simply nothing that the Executive Branch will not do to subjugate the USA.  And total gun control is the single most important goal that can be achieved toward that nefarious end.

There is perhaps no other piece of legislation that will unlawfully curtail American gun rights more than HR 4269 also known as the Assault Weapons Ban of 2015.  Make no mistake about it, this is the first of several regressive pieces of legislation that will serve to significantly weaken the 2nd Amendment.  The followup pieces of gun control legislation, which have already been written, are set to be introduced with each false flag black operation that will be executed by rogue government agencies, and which will likely occur throughout 2016.

Therefore, it is critical that every American patriot be aware of what is really in the works.  The NRA and all other like-minded organizations need to be standing at the ready to put down this assault against the constitutional right to bear arms.  For starters everyone would be well served by viewing the following video.  “Wild Bill for America” does a GREAT job of apprising the electorate of this gun control legislation that was submitted on December 16th, particularly breaking down precisely what it means for gun rights.

If you are not concerned after watching that excellent exposé of the U.S. Federal Government’s transformation into a totalitarian regime, then you are completely unaware of what the Founding Fathers proclaimed about gun rights.  The following link is a very good place to start for those who are unaware of their wise pronouncements on this crucial matter of life and death.

The Founding Fathers on the Second Amendment If the USA gives up it gun rights, it will cease to exist

Obama & Company know full well that if and when the American people surrender their right to bear arms, the last defense will have been removed from their ever-evolving Washington-based dictatorship.  As the White House perennially pushes for more and more presidential powers, the full use of those powers can only be exercised when the citizenry is both defenseless and powerless.  The present illicit autocracy, which has been painstakingly put into place, will see a full flowering when total gun control is the new ‘law’ of the land.

There is no better illustration of the ongoing despotic dynamic than Obama’s various initiatives to arm revolutionary rebels throughout the Middle east and beyond.  Not only has his Administration armed the Syrian rebels to the teeth, his Ambassador to Libya — John Christopher Stevens — was killed in the midst of overseeing a full-blown CIA-coordinated gun-running operation that was approved and facilitated by Secretary of State Hillary Clinton.  Routinely airdropping arms to various factions in Iraq, Libya and Syria has been another tactic used by Obama to arm  the citizenries of foreign countries.

So, the real sixty-four thousand dollar question is:  Why is Obama arming both rebels and terrorists abroad with every kind of assault weapon and yet he avidly seeks to deprive Americans of their longstanding constitutional right to bear the same arms?

The “Fast and Furious” scandal is yet another hypocritical example of where the United States Bureau of Alcohol, Tobacco, Firearms and Explosives (ATF) supplied extremely violent Mexican drug cartels with, at the very minimum, 2000 forearms.  That ATF gun walking debacle reveals the extent to which the Obama Administration will put high-powered weaponry into the hands of foreign criminal drug gangs, yet at the same time take guns away from law-abiding U.S. citizens.

Clearly, something is very wrong with this picture.

The following video further explains just how distorted the real picture is.  The Obama team has methodically misrepresented the true threats posed by an armed and ammoed citizenry.  The video that follows shows just how much disinformation, misinformation, and false information the current advocates for gun control have disseminated.  The U.S. Government working in tandem with the Mainstream Media (MSM) have proven to be the most aggressive purveyors of the outright prevarications revealed in this quite telling video. Don’t ever give up your guns … … … even if Obama unlawfully and unconstitutionally attempts to take them away.  The law of the land is forever on the side of the gun owner.

Once a president breaks federal laws and refuses to uphold the U.S. Constitution he has profoundly violated his oath of office and immediately becomes a serious enemy of the people. The governed are then obligated to respond appropriately.  There is only one remedy for such high crimes and misdemeanors (they are really felonies) and that is impeachment and a trial by jury.

The WSG is quite aware that We the People will not be deprived of our gun ownership without a HUGE fight.  This is exactly why they conscripted an “Obama” to do the dirty work.  They knew that he was always eager to be the perennial high school class president, and would do anything to get into office.  Anything!  Even the outright betrayal of every American and flagrant trashing of the Constitution!