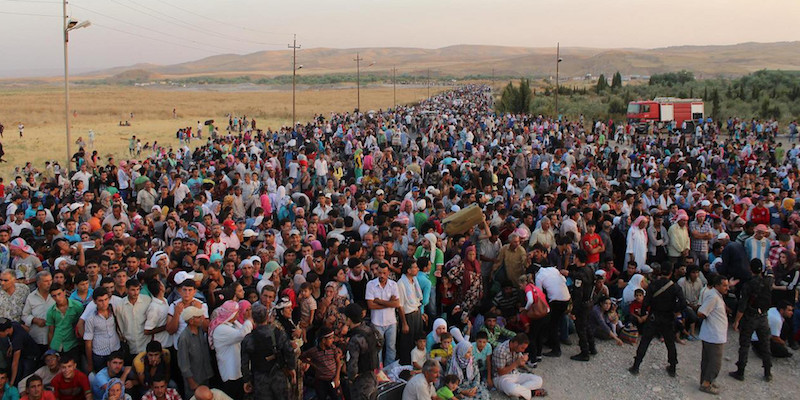 Since John D. Rockefeller was advised to protect his wealth from government taxation by creating a tax-exempt philanthropic foundation in 1913, foundations have been used by American oligarchs to disguise a world of dirty deeds under the cover “doing good for mankind,” known by the moniker “philanthropy” for mankind-loving. No less the case is that of George Soros who likely has more tax-exempt foundations under his belt than anyone around. His Open Society foundations are in every country where Washington wants to put ‘their man’ in, or at least get someone out who doesn’t know how to read their music. They played a key role in regime change in the former Soviet Union and Eastern Europe after 1989. Now his foundations are up to their eyeballs in promoting propaganda serving the US-UK war agenda for destroying stability in Syria as they did in Libya three years ago, creating the current EU refugee crisis.

We should take a closer look at the ongoing Syrian refugee crisis wreaking such havoc and unrest across the EU, especially in Germany, the favored goal of most asylum seekers today. George Soros, today a naturalized American citizen, has just authored a six-point proposal telling the European Union on what they must do to manage the situation. It’s worth looking at in detail.

He begins by stating, “The EU needs a comprehensive plan to respond to the crisis, one that reasserts effective governance over the flows of asylum-seekers so that they take place in a safe, orderly way…” He then says that, “First, the EU has to accept at least a million asylum-seekers annually for the foreseeable future.”

Soros does not elaborate where he pulled that figure from, nor does he discuss the role of other of his Soros-financed NGOs in Syria and elsewhere which manufacture faked propaganda to build a public sympathy lobby for a US and UK “No Fly Zone” in Syria as was done to destroy Libya.

The American hedge fund speculator then adds, among his points to be implemented, a series of proposals that would consolidate a de facto supranational EU state apparatus under control of the faceless, unelected bureaucrats of the European Commission. The Soros proposals call for creating what amount to EU-issued refugee bonds. He states, “The EU should provide €15,000 ($16,800) per asylum-seeker for each of the first two years to help cover housing, health care, and education costs – and to make accepting refugees more appealing to member states. It can raise these funds by issuing long-term bonds using its largely untapped AAA borrowing capacity…”

That issuing comes to 30 billion euros at a time when most EU member states are struggling to deal with domestic economic crises. Soros is generous with other peoples’ money. The mention of the AAA bond rating is the rating of the legal entity named the European Union. Soros has maneuvered for years to try to get a centralized Brussels independent financial power that would take the last vestiges of national financial sovereignty away from Berlin, Paris, Rome and other EU states, part of a scheme to destroy the remains of the national borders and of the nation-state principles established at the Peace of Westphalia in 1648 ending the Thirty Years’ War.

George Soros has more ideas how to spend European citizens’ tax euros. He calls on the EU to cough up an added annual commitment to “frontline countries” (Turkey, Lebanon, Jordan) of at least €8-10 billion annually. Then, insidiously, Soros declares, “Safe channels must be established for asylum-seekers, starting with getting them from Greece and Italy to their destination countries. This is very urgent in order to calm the panic.”

His use of the term “destination countries” is very interesting. Today, by a huge margin that means the Federal Republic of Germany. Soros strategy is obviously to target Germany, especially, with a refugee flood.

It has gradually come out into the open that many of the refugees or asylum-seekers flooding into the EU since summer of 2015 have come in response to reading Twitter or Facebook social media portraying especially Germany as an arms-open, refugee-loving paradise where all their needs will be met.

How did word get out that Germany was the “in place” for those in flight from Syria and other conflict areas? Vladimir Shalak at the Russian Academy of Sciences developed the Internet Content-Analysis System for Twitter (Scai4Twi). He made a study of over 19,000 refugees-related original tweets (retweets discounted). His study showed that the vast majority of the tweets name Germany as the most refugee-welcoming country in Europe.

Shalak’s study discovered that 93% of all tweets about Germany contained positive references to German hospitality and its refugee policy. Some samples of the Tweets:

• Wherever this German town is that welcomed a coach of Syrian refugees with welcome signs and flowers –thank you.

Now comes the real hammer. The vast majority of these “Germany welcomes refugee” Tweets come not from Germany, but from the United States and from the UK, the two countries up to their necks in the bloody deeds of ISIS and Al Qaeda and countless other terror gangs rampaging across Syria the past four years.

Shalak analyzed 5,704 original tweets containing a “#RefugeesWelcome” hashtag and a country name which welcomes them. It showed almost 80% of all Tweets claimed that Germany was the most-welcoming country in Europe. The second most welcoming country found was Austria with 12%. However, the study also found that those “Germany welcomes you” Tweets did not originate from inside Germany. Over 40% of all the Tweets originated from the USA, UK or Australia. Only 6.4% originated inside Germany.

George Soros is also the Daddy Warbucks financing a new EU think-tank with the name European Council on Foreign Relations (ECFR). On the website of the ECFR is an editorial titled, “If Europe wants people to stop drowning it needs to let them fly.” The Soros Think-Tank argues that the main reason migrants choose boats is EU Directive 51/2001/EC: “The EU directive was passed in 2001. Put simply, it states that carrier companies—whether airlines or ship lines—are responsible for ensuring that foreign nationals wishing to travel to the European Union have valid travel documents for their destination. If such travelers arrive in the EU and are turned away, the airlines are obligated to foot the bill for flying them home.” In other words, “open the gates of heaven wider, dear Lord.”

The cynicism of the Soros call for the EU taxpayers to step up to the plate and accept millions of new refugees, to fly them in without papers, and more, is clear when we look at the same Soros-financed network of NGOs active in Syria trying to create the propaganda background to get acceptance of yet another US “No Fly Zone” over Syria as was done against Iraq after 1991 and against Libya in 2012 to bomb those countries back to the stone age.

One of the key online advocates for a US-UK “No Fly Zone” over Syria, something the Russian intervention since September 30 has de facto blocked, is an organization known as Avaaz. Avaaz was given initial financial support by Soros’ foundation in 2007 to promote key policies suitable to the US State Department. They cite Soros’ Open Society foundation as their foundation partner. Avaaz played a key role promoting the 2011 No Fly Zone in Libya that introduced a regime of terror and chaos in that once prosperous and stable African nation. Avaaz is now very actively promoting the same treatment for Syria.

Another Soros-financed NGO active demonizing the Assad government as cause of all atrocities in Syria and helping build public support for a war in Syria from the US and EU is Amnesty International. Suzanne Nossel, until 2013 the Executive Director of Amnesty International USA, came to the job from the US State Department where she was Deputy Assistant Secretary of State, not exactly an unbiased agency in regard to Syria. As well, the Soros-financed Human Rights Watch has played a major role in falsely portraying ISIS and Al Qaeda civilian bombings and other atrocities as the work of the Assad regime, building support for military action from the US and EU.

The Middle East and other wars today including Ukraine are the product of the foreign policy doctrine set out in 1992 by then Defense Assistant Secretary Paul Wolfowitz, the infamous Wolfowitz Doctrine that justifies “pre-emptive” war, free from any oversight from the UN Security Council, against any nation or group of nations which threaten US “Sole Superpower” domination. George Soros, the hedge fund speculator turned self-proclaimed philanthropist, and his tax-exempt foundations, are an integral part of that pre-emptive war machine. Now Soros lectures the EU countries, above all Germany, on how they should receive the human fallout from the wars he and his cronies in the US State Department have created. That’s real Chutzpah, or perhaps it is really hubris.