EU should recognize Crimea as part of Russia – Czech president 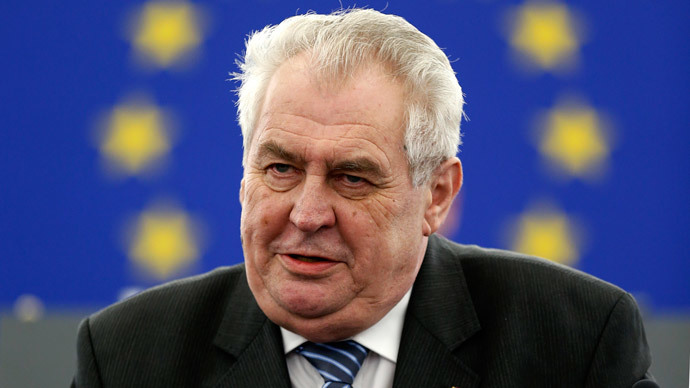 EU should recognize Crimea as part of Russia – Czech president

Czech leader Milos Zeman has said that the EU should accept the fact that Crimea is now part of Russia, stressing that the former autonomous region won’t return to Ukraine in any foreseeable future.

Zeman described Soviet leader Nikita Khrushchev’s decision to give Crimea to the Ukraine in 1954 as “stupid” in a radio interview.

He also blasted the law of the Ukraine’s state language which deprives the Russian-speaking population of the right to use its language at the state level. He called this situation “idiotic.”

However, the Czech leader suggested NATO should send its troops if Russia attempts to “annex the eastern part of the country,” as cited by Reuters.

“The moment Russia decides to widen its territorial expansion to the eastern part of Ukraine, that is where the fun ends,” Zeman said in a broadcast on Czech public radio.

“There I would plead not only for the strictest EU sanctions, but even for military readiness of the North Atlantic Alliance, like for example NATO forces entering Ukrainian territory,” the Czech leader added.

It follows a weekend of pro-Russian protests that are still engulfing eastern Ukraine.

On Monday, protesters in the Ukrainian city of Donetsk have seized the regional department building of Ukraine’s Security Service, local media reported, as cited by ITAR-TASS.

A day earlier, thousands of people waving Russian flags flooded the streets of eastern Ukraine on Sunday. Demonstrators in the cities of Donetsk, Lugansk, and Kharkov seized state offices, while in Donetsk they also demanded an independence referendum.

Since the Crimean referendum and the territory’s accession to the Russian Federation, Western leaders have been expressing their outrage over what they called “annexation” of Crimea.

However, other world powers supported Russia, with Argentinian President Cristina Fernandez de Kirchner saying in March that the West’s reaction is about double standards, recalling that “the UN Charter stipulates the right of people to self-determination, which means that this rule should be applied to all countries without any exception.”

She compared the situation in Crimea with that of the Falkland Islands, where a referendum was also held a year ago. The UN did not question the legality of the vote at that time, Kirchner reminded. The conflict over the territory in 1982 led to a war between the UK and Argentina. Buenos Aires lost that conflict; diplomatic relations between the two were restored only seven years later in 1989.